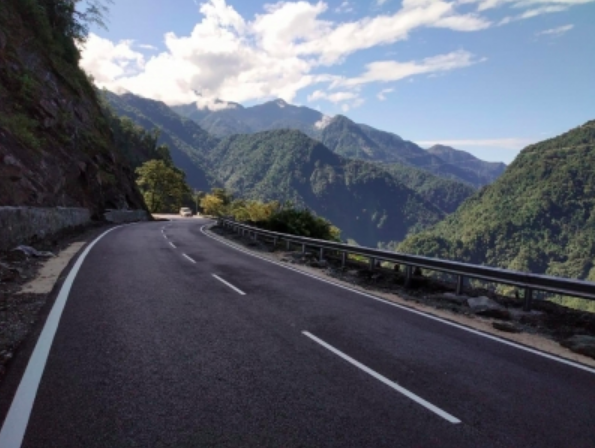 India has expedited work on its ambitious road infrastructure project — Kaladan Multi-Modal Transit Transport Project — that opens a gateway to Southeast Asian countries in an attempt to counter growing influence of China in the neighbourhood region.

The project linking Myanmar to India’s northeast witnessed delays for long. It has missed two deadlines. The delays led to an increase in cost of the project from Rs 536 crore in 2008 to Rs 3,200 crore in 2014.

Now, the Indian government has kick-started the project and is expecting to complete it by 2023 even as threats from Arakan Army, a Myanmar-based insurgent group with links to China, persists and Myanmar witnessed a military coup.

The project will boost infrastructure in the remote areas of Mizoram in India and Chin state of Myanmar. It would be an a strategic asset for the country to counter growing Chinese influence.

The project is part of India’s “Act East” policy. It connects India with South East Asian countries by providing a shorter route through Myanmar-Thailand and further towards East.

The strategic project will link West Bengal’s Haldia port with the Sittwe port in the Rakhine State of Myanmar by sea. It will also connect the Sittwe sea port with Paletwa in the Chin State through the Kaladan river route, and then from Paletwa by road to Mizoram’s Lawngtlai.

The sea route Kolkata to Sitwe is 539 km. The water inland way on the Kaldan ARiver from Sitwe to Paletwa is 150 km. The road route from Paletwa in Myanmar till Zorinpui in India is 110 km. From Zorinpui to Lawngtalai in Mizoram is another 87.81 km .

The project has components like sea route, waterways and roadways. The sea route and river route have already been finalised and now the two countries are working hard to complete the road route.

The deep water sea port at Sittwe is operational, waterway at Paletwa River Port is 90 per cent complete and construction of Paletwa river port is fully completed.

It’s road construction mainly on the Myanmar side that has caused delays.

The project is being piloted and funded by India’s Ministry of External Affairs. It was first conceived in 2003, agreement was signed in 2008 and work was awarded in 2010. Since then the project missed its 2015 and 2021 deadline but now all eyes are set on 2023.

The Ministry of External Affairs made Indian Railway Construction (IRCON) Engineer to monitor the project. IRCON floated the tender which was allotted to EPIL- Chada and Chada, a joint venture. The construction work started for Part 1 of the project inA2017 and stopped in 2019 as Chada and Chada declared itself bankrupt.

In the meantime, joint venture of EPILA- Chada and Chada subcontracted RK-RPP, a joint venture, for the work for part two that 49.2 km between Kaletwa and Zorinpui (India-Myanmar border).

“The 48 km that we are responsible for is not facing any hurdles and work is in progress,” Captain T.S. Negi (Retd), project coordinator for one stretch of the road, told IANS.

He said that they have to make roads from Zorinpui to Paletwa on the Myanmar side. It is 48.5 km stretch. Earlier, it was supposed to initiate the work from Myanmar side but now we have started from the border side because we have got the logistics support from Assam Rifles.

“We are making roads from Zorinpui at Indo-Myanmar border to Platewa on the Myanmar side. There are multiple challenges in constructing the roads like the terrain is inhospitable, less availability of water and logistics support. We always help the villagers whenever the need arises. We are providing medical facilities, constructed a football ground for youths, trying to eradicate the issues of water scarcity, ferry services also provided,” he said.

The remaining 62 km in Myanmar is being done by another company.

On the Myanmar side 110 kms of road construction is required. The 87 kilometre on the Indian side is almost complete but the bridges however remain a challenge.

The road route will have 33 bridges, out of which eight are on the Indian side and remaining in the Myanmarese side. All these bridges will be of class 70 bridge.

Class 70 means the bridge can bear a load of 70 tonne. Military machines like T-90 tanks, surface to air missiles and infantry combat vehicles can easily be transported.

At the behest of China, Myanmar-based insurgent group Arakan Army has been attacking Indian investments using their arms and weapons.

The insurgent group had been especially targeting the project as it aimed at counter China’s influence in Myanmar.

There had been two incidents of stand off firing and mine blast between June and August 2019.

In November 2019, Arakan Army abducted five Indians working at the project site. One of the workers died of heart attack while in custody. A member of parliament and some other Myanmar nationals were taken in.

In June 2020 the Arakan Army had a fierce clash with the Myanmar Army close to the project site on the southernmost tip of Mizoram called Zorinpui which means Mizoram’s greatest hope.

The area was named Zorinpui in 2008 when the Kaladan project started.

Further, China has also started carrying out development projects at Kyaukpyu port near Sitwe. Since 2013 China has also exported arms worth 270 million dollars to Myanmar.

Other challenges entail inhospitable terrain with adverse climate conditions and heavy monsoons.The Covid-19 lockdown also impacted in the progress of the project.

To counter threats from Arakan Army, in February 2019 joint operation between Indian and Myanmar Army named Operation Sunrise was carried out. It was launched to push the insurgent back and secure the project.

China never wanted that the Kaladan project be succeeded, and the reason why it is supplying arms to insurgent groups present in Myanmar.

However preceding the military coup in Myanmar, the Arakan Army has ordered its armed men to fall back as it entered a ceasefire with the Myanmar military.

These development diminished the threats from Arakan Army on the Myanmar side.

The strategic project is safe now, officials on ground say.

“The project is progressing with fast pace without any hindrance from Arakan Army. It will have huge impact on society both economic as well as in development of South Mizoram,” Brig Digvijay Singh, Assam Rifles Commander in Mizoram.

He also that off late there is no incident where the Arakan Army has tried to disturb.

Even when Myanmar is in turmoil and influx of refugees in India is happening, the project on the track.

Assam Rifles is guarding the boundary with Myanmar has enhanced vigil after the coup in Myanmar as it has led to influx of people across the border.

India and Myanmar share 1,643 km border and people on either side have familial ties due to the ethnic affiliations.

Mizoram, Manipur, Arunachal Pradesh and Nagaland are the Indian states that share borders with Myanmar. After the coup, Ainflux of refugees has been limited to Mizoram that shares a 510 km border.

So far around 700 people from Myanmar are living in camps in India. They are mostly policemen and their families but there is no adverse impact on the work for the project on either side.

“All those who have come in are accounted for and the movement is restricted to the border areas that come under the Free Movement Regime or FMR between the two countries,” said an official.

The two countries have an arrangement called the Free Movement Regime (FMR) that allows people to travel up to 16 km on either side of the borders and stay up to 14 days.

Locals stated that they projects will make the area developed. Joseph Lalhmingthanga, Secretary Young Lai Association said, “This project is very beneficial for the state of Mizoram and its people. I want to bring the attention of the central government with regards to development of locals.”

He also said that intake of locals into Indian Army and Assam Rifles should be increased.