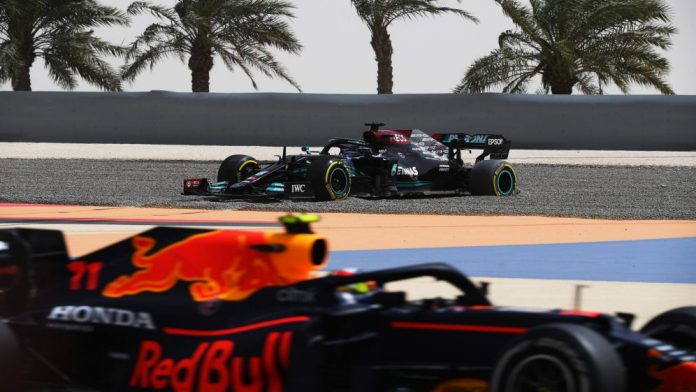 We’ve become used to Mercedes conceding to defeat to a rival at pre-season testing in recent years only to come back strongly at the first race – with the team’s seven constructors’ championships in the last seven seasons testament to that. But after Red Bull appeared to dominate 2021 pre-season testing in Bahrain as Mercedes visibly struggled, the Silver Arrows seemed genuinely concerned that their rivals were ahead going into this season.

Red Bull’s RB16B ran near-faultlessly at Bahrain, while Mercedes not only suffered from technical issues and delays – including Valtteri Bottas managing just six laps on the first morning after suffering a gearbox issue – but their W12 appeared hard to drive, with Lewis Hamilton enduring several low-speed spins in the car, while Bottas also struggled.

“We’re fortunate enough to have a lot of footage available to us,” said Vowles, “and it was pretty evident from that that [our] car was handling poorly, and conversely the Red Bull, in fact, looked what we would call planted. It was a very stable car, especially through the last sector of the lap. That’s a fair observation, it was visible to the outside and the lap times mirrored that as well.

“It’s also fair to say that we don’t have answers,” Vowles added. “There’s huge amounts of data available to us and now a long journey ahead to understand what was causing that.”

“Importantly,” put in Shovlin, “we could see that some of our competitors weren’t struggling in the same way as us, so we need to put quite a bit of focus on understanding why the rear end was a bit weak, how we can get it more stable and predictable, and that work’s going on now.

“Hopefully when we get to the race weekend, it won’t be so hard for the drivers, because they were having to work pretty hard to get the lap times that they were doing.”

Data analysis from testing suggested that, despite Mercedes’ struggles, they were still the preeminent team in terms of long run pace, and second only to Red Bull on short run pace. But despite that, Vowles called the test for Red Bull, saying the team looked the “class act” ahead of what he expected to be a very close season.

“I would say Red Bull are ahead on performance,” he said. “They’re the class act from the test. But it’s a test, it’s not a race and it’s one event out of 23 [Grands Prix to come].

“Are we going to have a close season? I would say so,” Vowles added. “Red Bull are a fierce adversary, they’ve got a strong package and clearly came out of the box very, very quick. The result of that is, across the season and across different track layouts, I’m sure you’ll see us move forwards and backwards relative to them.

“But I don’t believe that we’re going to go into this particularly finding all the performance that’s missing or being ahead of them. So in short, I think we’re going to have a close championship this year.”

We’ll get a better idea of whether Red Bull can finally arrest Mercedes’ relentless momentum in the turbo-hybrid era at the Bahrain Grand Prix weekend on March 26-28, as the 2021 season gets under way.