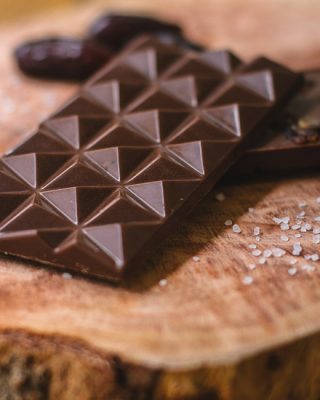 Chocolate is a preparation of the ground and roasted cacao seeds made in the form of a paste, liquid, or block, which may also be utilized as a flavoring ingredient in other foods or consumed alone.

Consumption, cultivation, and cacao’s cultural use were widespread in Mesoamerica, where the cacao tree is indigenous. When pollinated, the cacao tree’s seed ultimately forms a kind of sheath, or ear, 20″ long, stretching from the tree trunk itself. Within the sheathing are 30 to 40 brownish-red almond-shaped beans buried in a sweet, dense pulp. While the beans themselves are incredibly bitter due to the presence of alkaloids, the delicious sweet pulp may have been the first portion consumed by humans.

Cacao seeds grow in a broad range of colors, from bright green to pale yellow, all the way to crimson or dark purple. The coat can also differ significantly – some are sculpted with warts or craters, while others are perfectly smooth. This broad range in various pods is unique to cacaos in that their texture and color do not necessarily determine the taste or ripeness of the beans inside.

Archaeological evidence of Cacao in Mesoamerica

Olivia Abbe reported the earliest cacao use from approximately 5,300 years ago collected from the La Florida (Santa Ana) site in southeast Ecuador. Another discovery of chemically traced cacao was in 1984 CE when a bunch of brave archaeologists in Guatemala investigated the Mayan area of Río Azul. They found fifteen vessels encompassing male skeletons in the royal tomb. One of these containers was magnificently decorated and wrapped in several Mayan glyphs—one of these glyphs translated to “kakaw,” also recognized as cacao. The vessel’s inside was lined with a mysterious dark-colored powder, which researchers scraped off for further testing. Once the excavators took this powder to the Hershey Center for Health and Nutrition to be tested, they discovered trace amounts of theobromine in the powder, a significant indicator of cacao. This cacao was recorded to sometime between 460 CE and 480 CE.

There were several uses for cacao in the Maya. It was adopted in religious rituals and official ceremonies at festivals and feasts as a tribute, funerary offerings, and therapeutic purposes. Mayans used luxurious instruments and vessels to prepare and serve cacao for important gifts and tributes. Cacao beans were also extensively used as currency to buy anything from turkeys to avocados to sex—damn medieval era.

Famous invader Christopher Columbus encountered the delicious cacao bean on his fourth mission to the Americas on August 15, 1502 CE, when he and his crew captured a large native canoe that proved to carry, among other new goods for trade, cacao beans.

After the Spanish invasion of the Aztecs, chocolate was introduced to Europe. In the start, Spaniards would use it as a medicine to heal illnesses such as abdominal pain because it had bitterness to it. Once sweetened, it transformed. It quickly became a royal favorite. It was still exclusively served as a beverage, but the addition of honey or sugar halted the natural bitterness. The Spaniards originally intended to remake the original taste of the Mesoamerican chocolate by adding similar spices, but this habit had withered away by the top of the eighteenth century. Within less than a hundred years, chocolate laid a foothold throughout Europe.

The modern craze for chocolate brought a flourishing slave market, as between the mid-17th and late 19th centuries CE, the arduous and slow processing of the cacao bean was sadly manual. Cacao plantations spread as the Dutch, English, and French planet and colonized. With the reduction of Mesoamerican workers, mainly to disease, cocoa beans production was often the job of enslaved Africans and poor wage laborers.

1729 CE- The first mechanical cocoa grinder was finally invented in Bristol, UK. Walter Churchman petitions England’s king for patent and sole use of an invention for the “expeditious, fine and clean making of chocolate by an engine.” The patent was awarded by His Majesty King George II to Walter Churchman for a water engine used to prepare the chocolate. Churchman apparently used water-powered edge runners for developing cacao beans by crushing on a far larger scale than previously.

The patent for a chocolate refining process was later purchased by J. S. Fry & Sons in 1761 CE.