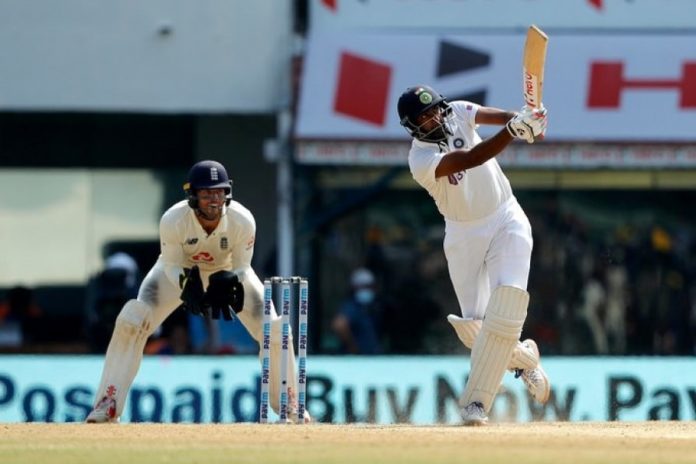 England thrashed India by eight wickets in the first T20 International here at the Narendra Modi Stadium on Friday.

The visiting England side first restricted India to 124 for seven in their 20 overs before coasting to the 125-run target in 15.3 overs to win the first game of the five-match series.

England opening batsmen Jason Roy and Jos Buttler did not have to do anything out of the ordinary or take undue risks as the target was small. Even then the two added 72 runs in eight overs to give the visitors a rollicking start.

Buttler was scalped by Yuzvendra Chahal who was taken for 44 in his four overs while Roy was picked by Washington Sundar.

However, Jonny Bairstow (26 not out off 17 balls) and Dawid Malan (24 not out off 20 balls) took the visiting side to the target with 27 balls to spare. The two shared an unbeaten 41-run partnership for the third wicket.

Earlier, India were restricted to 124/7 by a disciplined England bowling attack.

Only Shreyas Iyer (67 off 48 deliveries, 8x4s and 1×6) could offer any resistance as the rest of the Indian batting fell apart. Rishabh Pant (21 off 23 balls) and Hardik Pandya (19 off 21 balls) were the only others to get to double figures.

England opened the bowling with leg-spinner Adil Rashid (1/14 in 3 overs) who picked the wicket of skipper Virat Kohli in only his second over.

Before Kohli, India had lost K.L. Rahul as the first wicket to Jofra Archer in only the second over of the game. Archer returned as the most successful England bowler picking three wickets for 23 runs in four overs. He got the wickets of Pandya and Shardul Thakur as well.

The second T20 between the two sides will be played at the same venue on Sunday.

England’s bowling strategy of opening with spinner Adil Rashid and then unleashing genuinely quick bowlers caught India by surprise as they failed to cope with it and stuttered to just 124/7 in their 20 overs. The 125-run target was easy meat for England who won the first T20 International by eight wickets and with 4.3 overs to spare.

As against England’s two quick bowlers — Jofra Archer and Mark Wood — who combined to take four wickets and conceded an aggregate of just 43 runs in their eight overs together, the India pace bowlers were a poor match.

Bhuvneshwar Kumar, Shardul Thakur and Hardik Pandya bowled two overs each without making impact as they are barely medium pace and can’t rush the batsmen.

“What was the reason India lost the first t20 vs England? I think PACE was the difference,” tweeted the former India pacer.

While leg-spinner Rashid took the important wicket of skipper Kohli, the pace bowlers wreaked havoc with Archer and Wood removing the openers. Stokes then got rid of the dangerous Rishabh Pant, who managed to manufacture a six through a ramp shot. However, the pace bowling was so tight that neither No. 4 Pant nor No. 6 Hardik Pandya could manage a strike rate of 100. Pant’s rate was restricted 91.3 during his knock of 21 whereas Pandya’s was restricted to 90.48 in his 19-run knock.

Pandya was particularly struggling against genuine pacers who did not let him free his arms.

Pathan added in his tweet, “I think Hardik’s issue is facing genuine pace. I hope he gets better at it.”

India are missing Jasprit Bumrah, who can ramp up the pace. The right-arm fast bowler is sitting out of the series as he is getting married to TV presenter Sanjana Ganesan in Goa on Sunday and Monday.

India’s pace bowling options are left-arm pace bowler T Natarajan and right-armers Navdeep Saini and Deepak Chahar. India may pick Saini or Natarajan or both to add some zing or pace to their attack on a surface that is supposed to be unfriendly to medium-pace bowlers.

It is will be interesting to see if India will feature three-pronged spin attack.

None of the spin bowlers were effective just like the medium-pacers, although the bowling failure could also be because of the low total the batsmen had set up.

“In the practice wickets, the ball was turning and the spinners were bowling [a lot]. It was very similar to the wicket we played [Friday’s game] on. But our plan is obviously to play maxiumum spinners. That is our strength. So we backed them,” said Iyer.