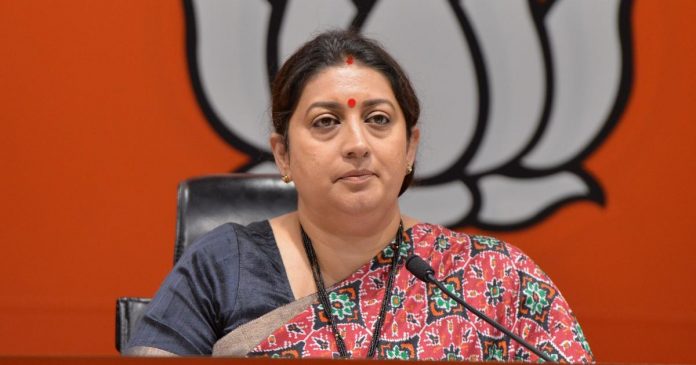 Union Textiles Minister Smriti Irani claimed on Saturday that Congress is the “most corrupt party” in the country which only showed dreams of development but did nothing for Assam, besides indulging in “divisive politics”.

Addressing public rallies in Mariani, Samaguri and Sibasagar Assembly constituencies in Assam, Irani said that the Congress only showed dreams of development during its rule in Assam, but the promises were fulfilled only after the NDA government led by Prime Minister Narendra Modi came to power at the Centre.

“The Bharatiya Janata Party is the only party in India which works for the development of all the regions of the country and benefits cross sections of people. The BJP government has done a lot of things for the people in the tea garden areas across the state,” Irani said in her maiden election campaign in Assam.

Urging the people to vote for the BJP “for continued growth and development of Assam”, the BJP leader said that funds would continue to come from the Centre, but the benefits of the Central funds would reach the common people only when there is a people’s government led by the BJP in Assam.

Without naming former Prime Minister Manmohan Singh, who represented Assam in the Rajya Sabha, Irani said that there are some tall leaders of the Congress from the state who even became the Prime Minister, but AIIMS, gas royalty, roads and many other infrastructure projects came to Assam only after Modi become the Prime Minister.

“Before Modi, no one ever expected that the Prime Minister of a country would talk about constructing toilets for the safety of poor women from the podium of Red Fort. The Congress, which could not even construct toilets for the poor people, is promising about making your future, constructing big health institutions, colleges and universities,” she said.

Irani said that the minimum daily wage of the tea garden workers before 2014 was Rs 97, which has been raised to Rs 217 now.