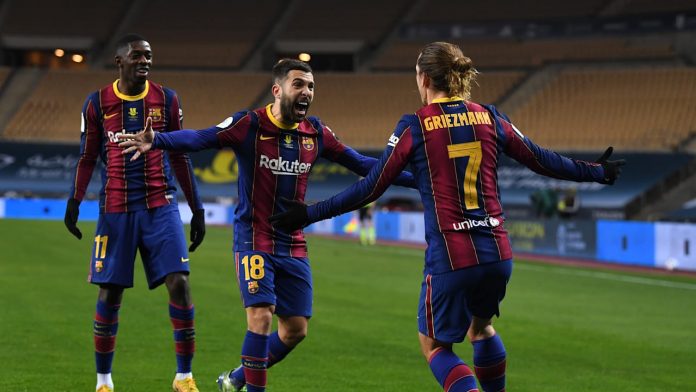 FC Barcelona moved to within two points of Atletico Madrid to increase the pressure at the top of La Liga less than 24 hours before Sunday’s derby between Atletico and Real Madrid, thanks to a 2-0 win away to Osasuna.

Goals from Jordi Alba and Illax Moriba gave Barca a hard-fought win against a rival that caused them lots of problems, especially in the first half in the El Sadar Stadium on Saturday.

Osasuna started the brighter of the two sides and Jonathan Calleri almost opened the scoring from the halfway line in just the second minute with Marc-Andre Ter Stegen chasing back.

The Barca keeper then saved well from Kike Barja as the home side continued to defend well and move the ball confidently.

Despite Osasuna’s control of the game, Barca took the lead in the 30th minute when Messi picked out Jordi Alba, who finished with a powerful shot into the top of the net.

Ter Stegen produced another magnificent save three minutes later after Ruben Garcia produced a fine piece of control in the Barca area.

Barca switched to a flat back four in the second half with Ousmane Dembele replacing Samuel Umtiti which helped them control the ball better in midfield.

Young substitute Illax doubled Barca’s lead eight minutes from time with his first goal for the first team after controlling and curling home with his left foot.

Saturday kicked off with Real Valladolid claiming a vital 2-1 win at home to Getafe, who ended with 10 men after striker Jaime Mata was sent off for kicking out in the second half.

Oscar Plano and Sean Weissman put Valladolid 2-0 ahead within 24 minutes and Mata scored for Getafe eight minutes before half-time.

Sevilla’s nightmare week continued as they followed losing 3-0 away to Barcelona on Wednesday to miss out on a place in the Copa del Rey final, with a 2-1 win away to struggling Elche.

Goals in the 70th and 76th minutes from Raul Guti and Guido Carrillo gave Elche their second win under coach Fran Escriba, with Luuk de Jong netting a late consolation for the visitors.

Elche’s win leaves Eibar in the bottom three after their 1-0 defeat away to Cadiz, which was decided by Alvaro Negredo’s header late in the first half.

Eibar did enough to take a point, but missed chances, the best of which was a penalty taken by goalkeeper Marco Dmitrovich which was saved by Cadiz keeper Ledesma.

Friday night saw Carlos Soler and Goncalo Guedes score late goals as Valencia came from behind to win the east coast derby 2-1 at home to Villarreal.