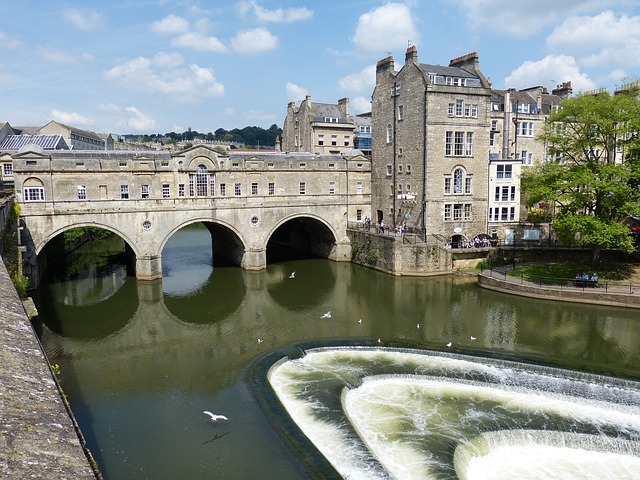 Bath is one of Britain’s most beautiful cities. Exquisite Georgian and Roman architecture, swish spas, and hipster hang-outs make it hard to resist.

Bath’s exceptional array of architectural wealth has earned the whole town an Unesco World Heritage Site status. It’s simple to see why. Bath is home to one of the best-preserved Roman bathhouses – located here because of hot springs that bubble up at a toasty 115°F (46°C) degrees. In the Royal and Circus Crescent, the town has some of Britain’s most majestic Georgian buildings.

Their development turned Bath into the destination for 18th-century society. That refined spa town tradition continues at Thermae Bath Spa, a luxurious old/new building combo that presents spectacular views of the cityscape from its unmissable alfresco roof-top pool.

This town’s history isn’t all about architecture. For many, Bath (including me) is synonymous with the English writer Jane Austen. The author of my favorite book, Pride and Prejudice, and Persuasion, stayed here in the early 1800s and used the town as a setting for a couple of her novels. An exemplary introduction is the Jane Austen Centre, where guides in medieval costume and a Regency tearoom help bring the medieval time to life. Other heritage drawcards include No 1 Royal Crescent, which presents an insight into the furnishings behind the all-embracing semi-circular facade, and the excellent folk art collections of the American Museum in Britain.

Top Things to see and do in Bath

To the visitor, Bath is a pretty Georgian city with a lot of structure intact. Bath lost several buildings in World War 2. Still, much of the city remained unchanged. Most of what was bombed were rebuilt, initially with 60s architecture, which is now being restored by some incredible replica Georgian buildings and some more contemporary construction. While the Council has permitted large areas of 21st-century construction, these are generally on the city’s outskirts and built on previously derelict land.