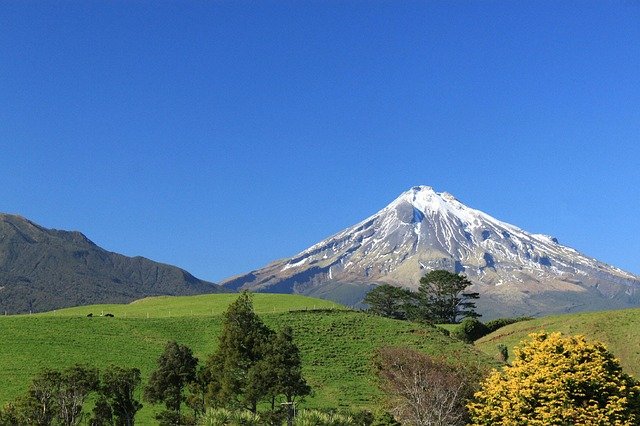 Taranaki is a paradise on the North Island of New Zealand dominated by its volcanic mountain, Mount Egmont, also known as (Mount) Taranaki. The volcano has developed a mildly sloping semi-circular coastal plain on its western side and a vast plain of rich farmland in the east to link it to the rest of the enchanting North Island.

How to reach Taranaki in New Zealand?

The interCity bus operates daily bus services to Taranaki from Hamilton, Auckland, Wellington, and many other cities and towns across New Zealand.

However, if you have the budget, you should drive to Taranaki.

From the north (Hamilton and Auckland), the route is State Highway 3. The trip from Hamilton nearly 240km – about 3.5-4 hours by car. The main service centers and rest-stops for the journey are Piopio (90km), Te Kuiti (70km from Hamilton), and Mokau (60km from New Plymouth). The 15km of the Awakino Gorge between Mokau and Piopio – is winding, narrow, and prone to closure by slips in lousy weather. It includes a short single-lane tunnel at the north end. There is a steep hill climb (not for amateur cyclists) over Mt Messenger between New Plymouth and Tongaporotu.

A near-perfect 2518m volcanic funnel overlooking the landscape, Mount Taranaki is an electromagnet to all who catch his eye. According to Māori mythology, Taranaki traveled from the North Island’s volcanic range after losing a fight with Mt Tongariro over the majestic Mt Pihanga. Geologically, Taranaki is the most recent of three large volcanoes – including Pouakai and Kaitake – that stand along the identical fault line. With the last major eruption more than 300 years ago, researchers say that the mountain is overdue for another go. But this shouldn’t let that put you off – it’s an undeniable beauty and the attraction of any visit to the part of the world. However, hikers should check in with information centers before attempting a climb as it’s extremely dangerous.

Lush Pukekura has 50 hectares of playgrounds, gardens, streams, trails, ponds, waterfalls, and display houses. In the summertime, rowboats drift across the main lake (full of weird arm-sized eels), next to which the Tea House serves delicious native light meals. The technicolored Festival of Lights pulls the summer crowds here, as does the impeccably harvested cricket oval. For the lazy, 45-minute motorized buggy tours can whip you around to see the best bits of the place.

Elvis is alive! At least he is at Kevin D Wasley’s excellent museum, which houses more than 10,000 of the King’s hits and a mind-boggling collection of Elvis memorabilia accumulated over many years. ‘Passion is an understatement,’ says KD, whose memorable grey hair is slicked back and on the theme. Take a prior appointment before visiting this place.