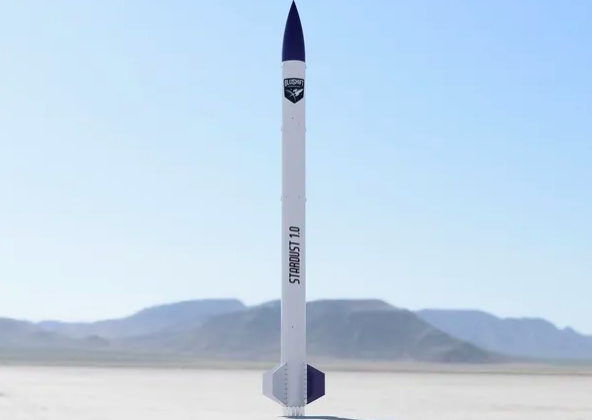 Stardust 1.0’s rocket engine, dubbed the Modular Adaptable Rocket Engine for Vehicle Launch (MAREVL), uses a proprietary solid fuel which, in the words of the company, is non-toxic and carbon-neutral.

Maine-based aerospace startup, bluShift Aerospace made history on January 31 when it launched the first-ever commercial booster rocket-powered entirely by biofuel. Founded in 2014, the startup has received grants from the Maine Technology Institute and NASA’s Small Business Innovation Research (SBIR) program as it embarks on a quest to become – as put by its owner Sascha Deri – the ‘Uber for space.’

The Stardust 1.0 rocket, weighing approximately 250kg and standing 20 feet tall, on Sunday, took to the skies from a military base in Maine, braving swirling wind and icy temperatures. It, reportedly, reached a height of 1,219 meters before deploying a parachute that guided it safely back to Earth.

Despite Sunday’s launch constituting a low-altitude test, it represents a significant milestone for the company which plans to send miniature CubeSat satellites into the Earth’s orbit using only farm leftovers as propellant.

Stardust 1.0’s rocket engine, dubbed the Modular Adaptable Rocket Engine for Vehicle Launch (MAREVL), uses a proprietary solid fuel which, in the words of the company, is non-toxic, carbon-neutral, and “cheaply sourced from farms across America.” Speaking to Politico, Deri noted of the fuel, “My two young daughters cold eat the fuel and no harm would come to them with the exception of constipation maybe.”

While it is unclear what exactly the fuel is made of, Deri, as quoted by the BBC, said, “We want to prove that a bio-derived fuel can serve just as well, if not better in some cases, than traditional fuels to power rockets and payloads to space.”

Stardust 1.0 is a single-stage prototype, reportedly, capable of carrying just 18 pounds of payload and achieving suborbital space. While that payload figure doesn’t sound like much, the company does not plan to compete with the likes of Jeff Bezos’ Blue Origin or Richard Branson’s Virgin Galactic.

Instead, it is seeking to corner a different market – academic research. The launch vehicle will allow teams of researchers to send small equipment up into suborbital space to conduct experiments at significantly cheaper costs than doing so using traditional rocket fuel.

The rocket is also designed to be re-usable and although Stardust 1.0 is just a prototype at this stage, the company is, reportedly, already working on another – Stardust 2.0 – capable of carrying a larger payload.

The two prototypes are meant to lay the foundation for larger commercial rockets that include Starless Rogue, a two-stage launcher for suborbital missions, and Red Dwarf, a three-stage launcher with a 66 lb payload capacity able to achieve low Earth orbit.

According to some reports, the industry for small satellite launch services could rake in as much as $69 billion over the next decade. bluShift Aerospace alone has stated that it expects to generate, at least, 40 new jobs in the next five years through its CubeSat launches.