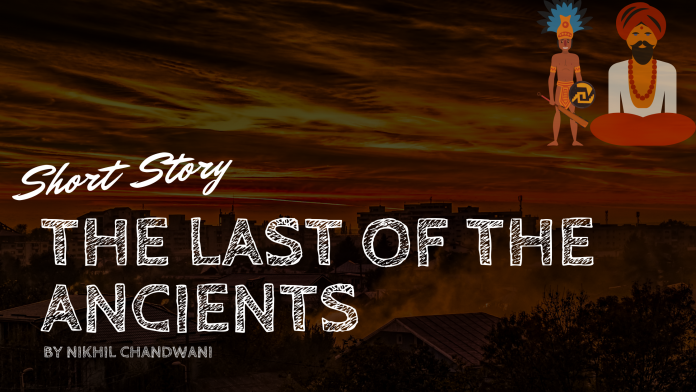 * Synopsis: On the dawn of their last day, two men from across the world sit together reminiscing about their beliefs, their lives, and their cultures. All the while the threat of their shared end looms ever closer.

The pre-dawn sky slowly faded to orange as the sun crested the horizon.

Watching it from the beach were two men who could not be more different, but who in this moment shared a common fate.

In the cool breeze of the morning, the ancient Mayan man wrapped his Manta around himself. It was a long piece of cotton fabric that was wrapped around the body that could be alternately worn as a simple neck piece, with the remainder flowing behind, or as a more protective and warm covering like it was now. The cotton had been dyed, of course. The man’s Manta alternated in stripes of red, blue and green. Underneath he wore a simple loin cloth.

Beside him sat a man from across the world. The ancient Hindu man smiled at his company for this fine morning.

“A bit cold for you, my friend?” said the Hindu man, whose name was Arjun.

The Mayan, Babajide, looked over at Arjun and saw what he was wearing. The cotton Dhoti was not dissimilar from the Mayans Manta. It, too, was a flowing cloth of cotton, but it was devoid of color and instead remained in its natural white. Arjun wore it laced around his legs almost like a loose pair of pants, with the fabric being knotted at the back. He also wore a simple cotton vest with no undershirt, leaving his chest open to the air.

“I am not cold per se, my friend.” Said Babajide. “After all, we come from similar climes. But the world around us has grown cold as of late. You know this as well as I.”

Arjun heaved a deep sigh, the smile slipping from his lips.

“You are not wrong in this.” He said “But let us not dwell on the now. For this moment, let us reminisce about all that has been good in the world. All that we have experienced.”

“That sounds like a pleasant idea.” Said Babajide. “I confess, I do not know much about the lives of your kind. Would you be so good as to enlighten me?”

“I would be delighted.” Said Arjun. “Where to begin…I suppose that the beginning would be as good a place as any. My culture believes that the great god Brahma created the world. Charged with its preservation was the god Vishnu, and the god Shiva would bring about its destruction.”

“Many more. But it is not my time to speak. Please, continue.”

“Well.” Said Arjun. “You see that we both wear cotton, but did you know that my civilization was the first to use cotton in our textiles?”

“I did not know that, actually.”

“Indeed. We are also a people who are known for our pottery and basket weaving. We take great pride in our crafts. The woman of our villages would often make and sell these crafts, while the men, like myself, turned to more laborious jobs such as carpentry or farming.”

“Which one are you, if I may ask?” said Babajide.

“Oh, I am but a simple farmer. I grow and harvest legumes, vegetables, and grains. It is a hard life, but a good one as well. I am surrounded by my family at all times. Family is another thing that is extremely precious to us.”

“It must be quite nice to be surrounded by your children.”

“Not just children.” Said Arjun. “In our villages, it is very common to have all different types of family members living under one roof. Aunts, uncles, cousins. We keep our families very close and we care for one another.”

“That’s a lot of mouths to feed.” Said Babajide.”

“You are not wrong.” Replied Arjun. “I would also like to add that we had an amazing education system that was prized by all. It was called the Gurukul system, and in fact, nearly half of the revenue from our land went toward the gurukul system in order to keep it functioning at the highest level. Our people were free to learn almost anything that they wished, free of cost.”

“Your civilization is truly remarkable.” Said Babajide. But as he did so, he looked over his shoulder at something.

“Do not think about it.” Said Arjun, drawing his attention back. “They are not a worry at least for an hour, and even then, they will not be for long. I have told you of my life and my culture. Please, tell me of yours.”

It seemed like Babajide was ready to keep going, but Arjun stopped him.

“My friend, you really have gods for all of those things?”

“All of those and more, but I will stop there.”

“Why do you have gods of so many things?” asked Arjun.

“We did not make them up. They simply are, as are your three. Speaking of which, we do believe in something similar.”

“It is indeed interesting.” Said Arjun. “Do you think that it may have a deeper meaning in the grand scheme of creation?”

“Who is to say? I am but a simple man. The workings of the gods are far above me, but it is nice to speculate and appreciate the beauty in things.”

“You make a valid point.” Said Arjun. “Please, tell me more about your people.”

“Well, you may have been the first to turn cotton into textiles, but did you know that we had the most sophisticated and highly developed script in the world”

“I did not know that, it’s quite fascinating!”

“Indeed. We were also known for our arts, mathematics, calendar, and astronomical system. As well as our agriculture like maize, beans, squashes, and chili peppers.”

“Were you a farmer as well?” asked Arjun.

“Indeed, I was!” I grew and harvested all of those things, and a large portion of the men in my family did as well. Our women, much like your own, took to more artsy positions such as wood, jade, obsidian, ceramics, and even paintings.”

“It seems that we are no so different as we may have thought.” Said Arjun. “Did you also live with large families as I did?”

“Yes! I was speaking from experience earlier when I said that a family that large is a lot of mouths to feed. But just like yours, ours worked hard, and we got through it.”

“How did your society operate?” asked Arjun.

“For the most part our people lived equally, as yours did. But there was one position that was above all else. That of the divine king. He is the mediator between the mortal and supernatural realms.”

“You mean that he talks to your gods?”

“He does. Or at least that is what we are told. But sometimes the king decrees things that we think the gods would never have. It is a tenuous relationship. But I will say this. The architecture that we built as a result was beautiful.”

For a moment, Babajide almost allowed himself to turn again. He was obviously nervous. But at the last second his friend pulled him back once more.

“My friend, please, tell me about these monuments. I want to hear more about your people.”

We built temples in the shapes of pyramids. They were large stone structures that were layered so that they looked like massive steps, with each layer getting smaller and finally ending in a small, flat platform at the top, where important ceremonies would take place. We also etched carvings and glyphs into them. They were so beautiful, my friend.”

“I am sure that they were. Come, walk along the shore with me. It is a beautiful morning and I would like to enjoy it.”

Babajide agreed and so, the two of them rose from their sitting positions and started walking along the sand of the shore, with the ocean’s waves lapping nearby.

“Did your people believe in an afterlife?”

“Yes, and no. My people believe in what is called Samsara. It is a cycle of death and rebirth. We believe that when we die, our soul lives on to then be reborn and inhabit another body.”

“So, you don’t think that you can die?” asked Babajide.

“Death is inevitable.” Said Arjun. “We know that we can die, but we do not believe that that death will be everlasting. Eventually, we will be reborn back into the world. Do your people think something different?”

“We do. We believe that when we die, we will find our way to the underworld by way of a cave. Only kings escape the underworld, because they have supernatural powers and can communicate with the gods. They break free of the cave and take their place among them. The rest of us. The commoners. We walk through the cave and end up in Xibalba. The underworld. They say it is a truly fearsome place, with a harsh landscape and vicious predators.”

“No wonder you’re so scared.” Said Arjun. “I would be too if that was my promised after life and it was looming so close.”

With that proclamation, Babajide couldn’t help but turn and watch their oncoming fates.

The knives were closer now than they had ever been before. Mere inches, instead of the feet in which they had started. Beyond, the two men could make out the throwers of the knives. Two men that were paused mid throw as their knives sailed through the air. One Mughal invader, his knife streaking toward Arjun, and one Colombian commander, his knife streaking toward Babajide.

Both of them brought death to an entire civilization.

“I am glad that you will be reborn.” Said Babajide. “That means that your people will never truly die, even though you are the last. With me, my entire civilization will be gone.”

“It will not be gone.” Said Arjun. “I will carry your memory with me throughout all my lives. You will live on, just as I will.”

“You would do that for me?” asked Babajide.

The two men turned their backs on their fates and watched the sun as it rose into the sky. Before them, the ocean glittered like a sea of diamonds.

But today, these last men. These last remnants of two dying civilizations, were able to come together as equals and share the beliefs, history, and lives of those that had been lost.

Babajide, who had feared his oncoming death, stood shoulder to shoulder with Arjun, his friend. He took solace from the fact that though their beliefs were very different, if there was a chance that the Arjun was correct and that his friend would make sure that he and his people were remembered, then maybe they would never be truly gone after all.

A Beginner’s guide to Making a Slide Desk