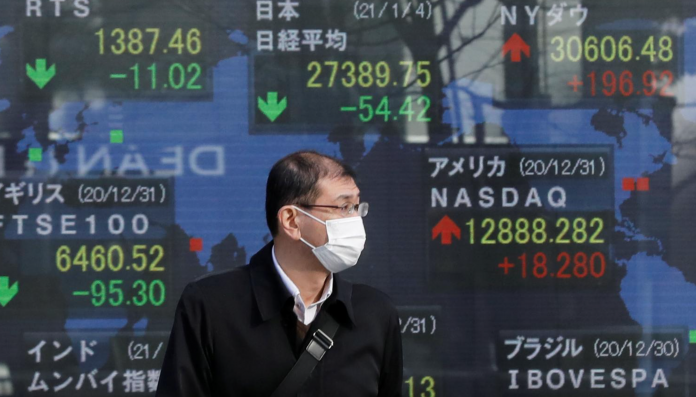 U.S. bonds extended their decline, boosting the 30-year yield to its highest level since March, following stronger economic data and a push in Washington to pass a massive relief plan.

European stocks are expected to be steady to slightly weaker, with Eurostoxx futures down 0.2% and FTSE futures up 0.1%.

A rise in Chinese short-term interest rates spooked risk assets, though analysts also noted position adjustments ahead of the Lunar New Year starting next week are likely to play a role too.

Higher interest rates raised worries Chinese policymakers may be starting to shift to a tighter stance to rein in share prices and property markets.

On Wall Street, the S&P 500 gained 0.10% while the Nasdaq Composite lost 0.02%. The NYSE Fang+ index of leading tech giants hit an intraday record high, thanks to 7.4% gain in Google parent Alphabet following its strong earnings.

Markets on the whole have calmed significantly in the past few days with the Cboe Volatility index slipping to its lowest levels in over a week.

As the retail trading frenzy seen last week faded, stock prices of GameStop and other social media favourites subsided, while silver also extended losses, having already wiped out gains made on Monday.

While it is unclear how much compromise the Democrats are willing to make with Republicans who are calling for a smaller package, many investors expect additional spending of at least $1 trillion.

U.S. bonds reacted strongly to the possibility of bigger borrowing, with the 30-year bond last up 2.2 basis points at 1.935%, a level last seen in late March.

In the currency market, rising U.S. yields helped the dollar against its peers, with its index staying near its highest levels in about two months.

In addition, some market players say the U.S. lead in vaccinations over other nations is starting to boost the prospects of an earlier U.S. economic recovery, helping the dollar.

The common currency failed to capitalise on improved sentiment in Italy after former European Central Bank chief Mario Draghi accepted the task of trying to form a new government in the country.

Oil markets continued to advance after the OPEC+ alliance of major producers stuck to a reduced output policy and as U.S. crude stockpiles fell to their lowest since March last year.