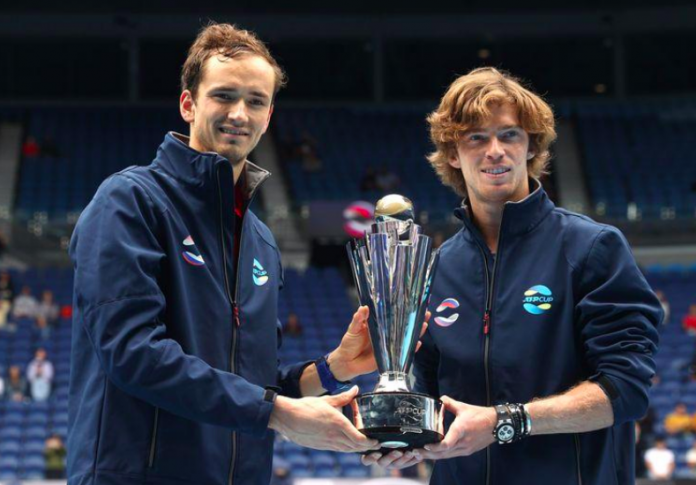 Daniil Medvedev and Andrey Rublev, battle-hardened after firing Russia to an ATP Cup triumph at Melbourne Park last week, both cruised into the second round of the Australian Open in straight sets on Tuesday.

Seventh seed Rublev opened the day’s action on John Cain Arena with a 6-3 6-3 6-4 win over Yannick Hanfmann before Medvedev, the fourth seed, dispensed with Vasek Pospisil 6-2 6-2 6-4 to extend his winning streak to 15 matches.

The 24-year-old raced through the first two sets against Pospisil on Margaret Court Arena but his Canadian opponent, who was one of 72 players confined strictly to their rooms during pre-tournament quarantine, proved more obdurate in the third.

It only delayed the inevitable, however, and Medvedev eased into a second round meeting with Roberto Carballes Baena or Attila Balazs after an hour and 47 minutes.

“To be honest, it was good not to lose any matches (at the ATP Cup) but on the other hand, we played on Sunday and had a lot of matches against tough opponents,” said Medvedev.

“So I’m really happy that I finished fast today.”

Rublev, who took five minutes fewer to lock up his second-round tie against Thiago Monteiro, said playing for a week at Melbourne Park already had helped ease his transition into the Australian Open.

“I was a bit nervous because it’s first match of Grand Slam of the year, so I started a bit tight (but) in the middle of the set I was already controlling the match,” said the 23-year-old.

“Because of the ATP Cup, I adapted to the courts really fast, so I’m already here feeling good.”

If the seedings hold, the erstwhile ATP Cup team mates will face off in the quarter-finals as they vie to give Russia its first men’s singles champion at the Australian Open since Marat Safin in 2005.