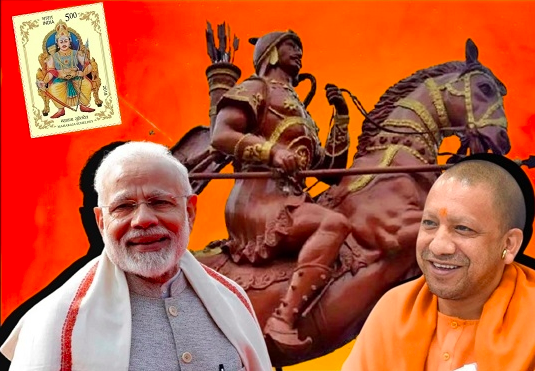 Prime Minister Narendra Modi will lay the foundation stone of a statue of the warrior king, Suheldev, in Bahraich on Tuesday to commemorate his birth anniversary.

Suheldev is an icon of the Rajbhar community.

The Prime Minister, who will be addressing the people virtually, will also unveil programmes for the beautification of Shravasti, Chittora Lake and Bahraich on the occasion.

According to a government spokesman, the Prime Minister will also announce the development of various tourist amenities like a cafeteria, guest house, and a children’s park.

Chief Minister Yogi Adityanath and Governor Anandiben Patel will be attending the event in Bahraich.

The programmes will also include poetry recitation by renowned poets followed by lighting of 1.25 lakh ‘diyas’ and other cultural events.

The Modi government has taken a number of steps to honour Suheldev in order to consolidate its position in the Rajbhar community.

In February 2016, BJP leader Amit Shah had unveiled a statue of Suheldev and also launched a book on him in Bahraich district near the Indo-Nepal border, where the medieval king enjoys a legendary status, the spokesman said.

The central government had also released a postal stamp, and run a superfast train — ‘The Suheldev Express’. The tri-weekly train covers the breadth of India’s most populous state and runs from Ghazipur in Purvanchal to Anand Vihar in Delhi.

With the exit of Suheldev Bhartiya Samaj Party (SBSP) from the alliance with the BJP last year, the Yogi Adityanath government has now chalked out an elaborate plan to commemorate the contribution of Maharaja Suheldev in national integration and reach out to the Rajbhar community.

This is the first time that the government is celebrating Suheldev’s anniversary.

The chief minister has issued directives to hold events to mark Suheldev’s birth anniversary at the memorials of martyrs in all districts.

The move is apparently designed to appease the Rajbhar community, which constitutes around 17-18 percent of the population in the Purvanchal region.

Suheldev was a legendary king of Shravasti (in the present-day north-eastern Uttar Pradesh) who is known to have defeated and killed the Ghaznavi general, Ghazi Saiyyad Salar Masud, in Bahraich in the early 11th century.

Prime Minister Narendra Modi on Tuesday said that the government is correcting irregularities in writing of history which did not give importance to most of the people who sacrificed their lives for the nation.

The correction is being done as the country approaches the 75th year of its independence, said the Prime Minister while addressing people after laying the foundation stone of Maharaja Suheldev Memorial and development work of Chittaura Lake at Uttar Pradesh’s Bahraich via video conference.

It is more important to remember the contribution of the historical heroes and heroines that have made an immense contribution to the country, the Prime Minister said.

He lamented the fact that the people who sacrificed everything for India and Indianness have not been given their due in history books.

The Prime Minister emphasised that the history of India is not just the history written by colonial powers or those with colonial mindsets. “Indian History is what has been nurtured by the common people in their folklore and taken forward by generations.”

The Prime Minister asked whether the first Prime Minister of Azad Hind Government, Netaji Subhas Chandra Bose, has been given the place that he deserves.

Modi said that the ruling government had recognised Neta ji by strengthening his identity from Red fort to Andaman Nicobar.

Similarly, the Prime Minister said, that the treatment to the unifier of more than 500 princely states, Sardar Patel is also well-known. “Today, the Statue of Unity, the world’s tallest statue is of Sardar Patel.”

The key architect of the Constitution and voice of the exploited, deprived and downtrodden, Baba Saheb Ambedkar, was always looked through the political prism. Today, the Prime Minister said, all places associated with Dr Ambedkar from India to England are being developed as PanchTeerth.

“There are innumerable personalities who were not recognised due to various reasons. Can we forget what happened with the bravehearts of Chauri Chaura?” asked the Prime Minister.

The Prime Minister recalled Maharaja Suheldev’s contribution as a sensitive and development-oriented ruler.

“Maharaja Suheldev has been kept alive in the hearts of people by the folklore of Awadh, Tarai and Poorvanchal despite being ignored by textbooks.”

Prime Minister Narendra Modi on Tuesday said Sahaj Marg, heartfulness and yoga are a beacon of hope for the world, in a valedictory address on the occasion of Shri Ram Chandra Mission completing 75 years.

“In today’s world, there is a lot of emphasis on fast pace, people are short on time. In such times, through Sahaj Marg, you (Shri Ram Chandra Mission) are making a significant contribution in keeping people energetic and healthy,” said Modi.

He appreciated the fact that thousands of the mission’s volunteers and trainers familiarise the world with the art of yoga and meditation.

Modi termed this endeavour as a huge service to mankind and appreciated Kamlesh Patel, guide of heartfulness.

He said the mission is inspiring the whole world and especially youth towards a healthy body and mind.

According to the mission, heartfulness is a set of meditative practices and lifestyle changes, developed at the turn of the twentieth century and formalised into teaching through the mission in 1945 in India.