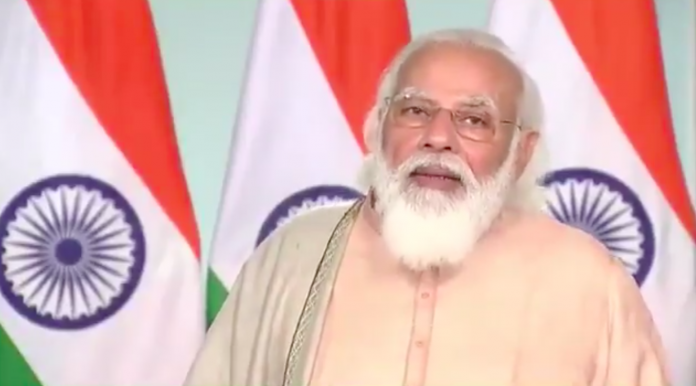 A day ahead of his visit to poll-bound West Bengal, Prime Minister Narendra Modi on Sunday said the BJP’s vision and effort is to ensure “top quality development” in the state currently ruled by the Trinamool Congress under Chief Minister Mamata Banerjee.

The Prime Minister will be in West Bengal’s Hooghly district at around 4.30 p.m. on Monday to inaugurate various railway projects to bolster the BJP’s campaign considering upcoming Assembly election which is due before the expiry of the state Assembly in May-end this year. The BJP, which had made deep inroads in the state during the 2019 Lok Sabha polls by winning 18 of the 42 seats, is targeting more than 200 of the 294 Assembly seats.

It will be Modi’s second visit to the state in a month. He had addressed his maiden public rally in West Bengal on February 7 at East Midnapore district.

“The great soil of West Bengal has nurtured extraordinary individuals who have contributed towards national progress. It’s our vision and effort to ensure West Bengal gets top quality development,” the Prime Minister said in a series of tweets.

From Hooghly, the extension of Metro railway from Noapara to Dakshineswar will be inaugurated, said Modi, adding this project is special because it will improve access to the sacred Maa Kali Temples at Kalighat and Dakshineswar.

“These temples are vibrant symbols of India’s great culture.”

Mentioning about two newly-built stations of Baranagar and Dakshineswar, the Prime Minister said the stations have many modern facilities that will further ‘ease of living’ as “they have also been designed aesthetically.”

The Prime Minister will inaugurate the extension of Metro railway from Noapara to Dakshineswar and flag off the first service on this stretch. This 4.1-km extension has been constructed at a cost of Rs 464 crore, fully funded by the central government.

He will also inaugurate a line between Kalaikunda and Jhargram over a stretch of 30 kms of the 132-km-long Kharagpur-Adityapur Third Line Project of South Eastern Railway, which was sanctioned with an estimated cost of Rs 1,312 crore.

The four stations between Kalaikunda and Jhargram have been redeveloped by constructing four new station buildings, six new foot over bridges and 11 new platforms, along with renovation of the existing infrastructure.

The Prime Minister will also dedicate to the nation the doubling of the Azimganj to Khargraghat road section, which is a part of the Howrah-Bandel-Azimganj section of Eastern Railway, which has been laid at a project cost of about Rs 240 crore.