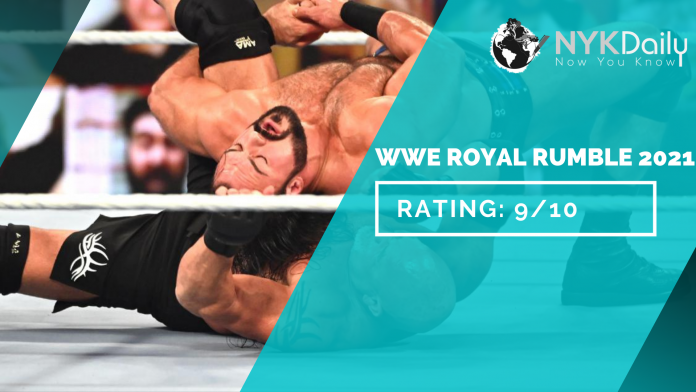 Asuka and Flair worked over Nia Jax with quick tags as the match started. Nia Jax knocked Charlotte off the apron and worked over Asuka, who tried to return, but Nia Jax mostly no-sold the charges until Asuka hit a facebuster for a quick 2. Asuka hit a powerbomb off the rope for two as Baszler broke it up. Asuka caught Shayna Baszler with a kick to the head.

Asuka took out NIA Jax at ringside to have Shayna Baszler toss Asuka over the announce table. Charlotte took out the heels with a moonsault off the top rope. Ric Flair came out, and Shayna rolled her up for a quick two. Charlotte with a big boot to Shayna Baszler. Lace Evans emerged on the apron for a distraction. Flair locked in the Figure Eight on Shayna Baszler, but Evans pulled out Charlotte Flair’s arms. Evans hit Charlotte in the face with what looked like brass knuckles, allowing Nia Jax to hit a leg drop to Flair for the win.

Match Review: 2.75/5. It was a good match with a surprising finish, with Ric Flair costing Charlotte Flair again.

The main show started with Drew McIntyre hitting a headbutt followed by a spear that sent Goldberg to the floor. Goldberg sent him into the steel steps, then Goldberg speared him through the barricade. This was before the fight even started.

Match Review: 2/5. Good match, and I am so happy Drew McIntyre won. I am so, so relieved. This should be the end of Goldberg’s career. Drew McIntyre is impressive, and he needs a real rivalry, and tomorrow’s RAW will hopefully start that.

Sasha Banks worked over Carmella’s right arm when the match started. Reggie distracted Banks and allowed Carmella to take over outside the ring. Carmella worked over The Boss for a few minutes.

At one point, Carmella tied up Banks’ hair in the bottom rope and landed some strikes. Banks fired back by hitting a double knee strike in the corner for 2. Banks with a knee strike but was sent to the floor, and Reggie caught her. The referee threw Reggie to the back. Carmella hit an outside dive and landed badly on her face.

Match Review: 3/5. It was better than I expected. Sasha rightfully won the bout. I am happy for her.

Bayley was out at #1 while Naomi next followed. Bianca Belair entered at #3, while Billie Kay entered #4. Shotzi Blackheart entered at #5. Shayna Baszler arrtived at #6. Toni Storm was next. Shayna quickly eliminated Blackheart. At #8 was the returning Jullian Hall and followed by Ruby Riott. The legendary (one of my favorite) Victoria was #10 and was knocked through the bottom rope (botch?). Peyton Royce was at #11.

Santana Garrett arrived to the scene next. Liv Morgan came out out, and the ring was filling up at this point. Kay eliminated Jullian with a big boot; then the Riott Squad eliminated Kay. Rhea Ripley was out at #14. Ripley destroyed Toni Storm. Shayna eliminated Victoria (booooo), then Santana. At #15 was Charlotte. Ruby Riott was eliminated, and Dana Brooke was out at #16. Royce eliminated Morgan. At #17 was Torrie Wilson (she still looks gorgeous). Rhea eliminated Dana with a slam on the apron. Lacey Evans, who came out with Ric flair and wearing Flair’s robe, was next. Charlotte Flair went right after Evans. Charlotte eliminated Royce. Shayna eliminated Torrie. At #19 was Mickie James. Belair eliminated Bayley.

Nikki Cross was out at #20 and Alicia Fox at #21. There was a spot where Fox pinned R-Truth to win the 214/7 Title. Mandy Rose at #22, then Dakota Kai at #23. Carmella at #24. James was out then Rose and Kai. R-Truth won his title back. Tamina Snuka was at #25. Naomi got tossed to the floor but landed on her back and wasn’t eliminated. She managed to get to the bottom rope. Lana was out next. Alexa Bliss was at #27 but quickly eliminated. At #28 was Ember Moon, and #29 was Nia Jax. Shayna eliminated Evans while Moon was outed by Jax. Shayna and Jax eliminated Naomi.

Natalya was #30. Jax eliminated Baszler. Lana eliminated Jax. This led to Jax getting back in the ring and attacking some other stars. Baszler was also eliminated. Rhea, Bianca, Nattie, Charlotte, and Lana as the final five. Lana was eliminated. Belair eliminated Natalya. Rhea and Bianca attacked Charlotte to eliminate her. Rhea and Bianca went at it. Belair clotheslined Rhea for the elimination. The match ended in 59 minutes.

Match Review: 3.75/5. The right person won in this brilliant Royal Rumble Match with some nice surprises in Victoria, Jillian Hall, and Torrie Wilson.

Roman Reigns hit the Superman Punch while Kevin Owens hit a pop-up powerbomb right out of the gate. They brawl into the crowd with steel steps. Roman Reigns poked Kevin in the eye, and they brawled on the structure with all of the screens.

Kevin hit him in the legs with a chair; then, Roman got his shots in with the chair. Owens hit a Stunner, but Roman Reigns fired back with Superman Punches then tossed him off the platform through tables. Kevin crawled to the backstage area, but the Big Dog ran over Owens in a golf cart. Owens hit him with a clipboard.

Owens sent him through a table. Owens climbed a forklift and hit a Swanton bomb off it. Reigns got to his feet but were bleeding from his face. They brawled to the stage. Reigns speared him through the titantron. Owens hit him with a Stunner then handcuffed him to the stage support beam, but Reigns shoved the referee into the beam. Paul Heyman came out and let Reigns free. A new referee came out, and Roman Reigns locked in the guillotine choke to make Owens pass out for the win. The match ended in 25 minutes.

Match Review: 4.5/5. WOW! It the best Last Man Standing match in the modern era, with Roman Reigns coming out strong (as predicted). Kevin Owens showed why he belongs at the top as well. Do check out this match. It was 25 minutes of brutal arse-kicking.

Edge and Orton were the first two stars out. Sami Zayn and Mustafa Ali were out next. Jeff Hardy was out at #5 and quickly laid out by the heels. Edge and Orton brawled to the floor, where Edge hit a DDT to Orton on the apron. Dolph Ziggler at #6. Edge hit Orton with a chair a few times. Ziggler eliminated Hardy.

Shinsuke Nakamura was out at #7 and Carlito at #8. Orton was helped to the backstage arena. Xavier Woods out at #9, Big E out at #10. Zayn was eliminated by New Day. At #11 was John Morrison. Big E eliminated Ali. Ricochet was at #12. Ricochet took out everyone with a dive. Elias was next out. Carlito was eliminated by Elias.

At #14 was Damian Priest, who quickly eliminated Elias. The Miz at #15. Bad Bunny came out to the ring to confront Miz for destroying his turntables, and this allowed Priest to eliminate Miz and Morrison. Bunny went to the top rope and took them out. Matt Riddle at #16 and Daniel Bryan followed. Kane was out at #18 and eliminated Ziggler, then hit a chokeslam to Ricochet on the apron. Bryan wanted a hug, and they did it. Kane then hit a chokeslam to him. Priest eliminated Kane. At #19 was Baron Corbin, who eliminated Nakamura after hitting Deep Six. Otis at #20, but he was quickly eliminated by Corbin. Dominick was at #21, and he eliminated Corbin. Lashley at #22. Lashley eliminated Dominick, then Priest. The Hurricane at #23 but was quickly eliminated. Christian was out at #24. Lashley was eliminated by everyone. AJ Styles at #25 and Rey Mysterio at #26. Omos, who wasn’t in the match, eliminated Big E. Sheamus was #27. Omos eliminated Rey. Cesaro at #28 and Seth Rollins at #29. The final spot was Braun Strowman, who eliminated Styles and Sheamus.

The final seven were Orton, Edge, Bryan, Strowman, Riddle, Rollins, and Strowman. Seth eliminated Bryan. Seth hit the stomp on Riddle on the apron. Strowman and Christian were out. Edge tossed out Rollins. Orton came out of nowhere and hit an RKO to Edge. However, Edge pushed Orton over the top rope. The match ended in 59 minutes.

Match Review: 4.5/5. I thought it was an outstanding Royal Rumble match. I marked out when I saw Christian as a surprise entrant. Dominik Mysterio eliminating Corbin was a sight to behold. I was rooting for Daniel Bryan and wanted him to win it, but I am genuinely happy for Edge.

Three Stars of the show.