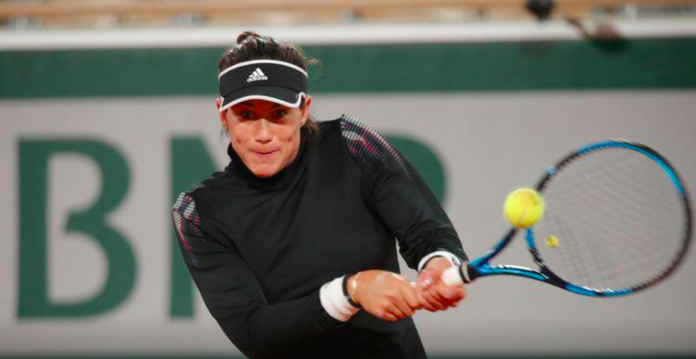 Former world number one Garbine Muguruza sounded out a warning to her Australian Open rivals with a 6-1 6-0 thrashing of Marketa Vondrousova on Saturday to set up a Yarra Valley Classic final against Ash Barty.

Australian Barty, who tops the world rankings, got her place in Sunday’s final of the warm-up tournament when Serena Williams pulled out of their semi-final on Friday.

The withdrawals all had the look of precautionary measures and it was a case of feast to famine for organisers, who had put on some 70 matches on Friday after play was postponed a day earlier because of a COVID-19 scare.

The delayed schedule and the Monday start of the Australian prompted organisers of the Grampians Trophy warm-up event to cancel Sunday’s final.

Muguruza looked in rude health in backing up Friday’s 6-2 6-2 win over Sofia Kenin, which had given her a measure of revenge for her loss to the American in last year’s Australian Open final.

The former French Open and Wimbledon champion took less than an hour to blow Czech Vondrousova off the court at the Margaret Court Arena and has reached the final with the loss of only 10 games in four matches.

“I think I played well today, my serve was working well at the right moments and I was able to control the match,” said Muguruza, who is seeded 14th for the Grand Slam and faces lucky loser Margarita Gasparyan in the opening round.

Osaka’s withdrawal gave Belgian Elise Mertens a walkover to the final of the Gippsland Trophy against Kaia Kanepi, who beat ninth seed Ekaterina Alexandrova 6-3 7-6(6) on Saturday.

U.S. Open champion Osaka said she was struggling with a long-term shoulder “niggle”.

“It kind of flared up again because I played a lot of matches back-to-back,” the 23-year-old said.

“But for me, my main focus is hoping I can rest enough before the Open.”

At the Grampians Trophy, Azarenka withdrew from her quarter-final against Anett Kontaveit, giving the Estonian a walkover. The WTA said the Belarusian had a lower back problem.

Kontaveit will play Maria Sakkari on Sunday in the semi-finals after the Greek beat 2016 Australian Open champion Angelique Kerber 6-4 6-2.

However, there will be no trophy to play for after the final was scrapped at the tournament, which was organised for those players confined to their hotel room for two weeks after passengers on three charter flights taking them to Australia tested positive to COVID-19.

“The semi-finals will go forward as scheduled on Sunday. Both finalists will receive finalist points and finalist prize money,” the WTA said in a statement.