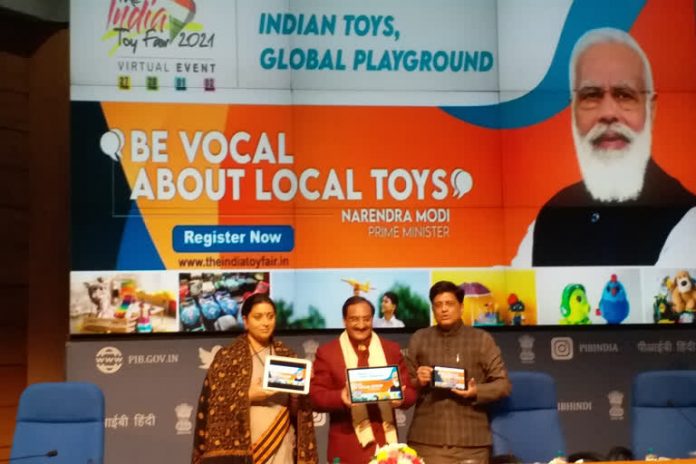 The website for India Toy Fair – 2021, the country’s first such event to be held virtually from February 27 to March 2, was jointly launched on Thursday by Union ministers Smriti Irani, Ramesh Pokhriyal Nishank and Piyush Goyal.

At the launch event, Women and Child Development Minister Irani said, “We are making efforts to empower and strengthen the toy industry in our country under the guidance of Prime Minister Narendra Modi to fulfil the dream of Aatmanirbhar Bharat.”

She added that with this initiative, the government intends to connect the children with toys and sports.

Commerce and Railway Minister Goyal said, “The toy fair is another example indicating that under the Modi government, all the departments work in a coordinated and committed manner.”

Goyal further said that the ‘India Toy Fair – 2021’ is the first-ever initiative to bring the different stakeholders of the industry, especially the children, parents and teachers, on a single digital platform.

He highlighted that play-based, discovery-based and activity-based learning plays an integral role in bridging the gap between day-to-day studies and practical hands-on learning, which is also a prime focus of the National Education Policy (NEP) 2020.

As part of the implementation plan of NEP 2020, toy-based pedagogy is being developed from pre-school to Grade 12 levels, which will be based on toy-making in class using low cost and no cost material, he said.

Goyal also said that about a year back, complaints were received about poor quality cheap toys being imported into the country, adversely affecting the Indian toy industry. The matter was examined by a committee which found that 30 per cent of the imported plastic toys were having large amount of chemicals/heavy metals, way beyond the prescribed levels. This, he said, led to the quality control order for toys, which will ensure that Indians get access to quality toys.

Speaking on the occasion, Education Minister Pokhriyal said, “Indian toys have been the building blocks of a happy childhood. They are not only a source of entertainment, but also tools of learning and growth.”