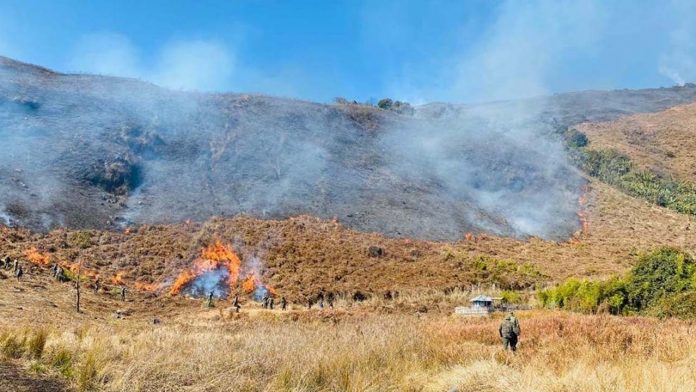 Defence spokesman Lt Col P. Khongsai said that troops of the Spear Corps extended immediate and critical help to the civil administration in dousing the major forest fire near Anini in Dibang Valley.

“The forest fire broke out at Koylabasti and Anini on Thursday night and soon engulfed the surrounding mountain ridges. In a quick response to the developing situation, the units of the local formation quickly deployed three response columns and immediately took charge of the situation. It took the Army and local administration almost 11 hours to douse the forest fires,” he said.

Khongsai said the well-coordinated and timely response by the Army averted a major disaster and saved lives and property. The local authorities and members of civil administration lauded the Indian Army’s effort in averting a major tragedy in the area.

The forest fire caused huge damage to the flora and fauna, forest and environment of the Dzukou Valley, which is one of the 10 most beautiful places in the mountainous northeast India. The Dzukou valley, situated at an altitude of 2,452 metres above the sea level and 30 km from Nagaland capital Kohima, is also a sanctuary for the endangered Blyth’s tragopan – Nagaland’s state bird – and other species of birds and animals.