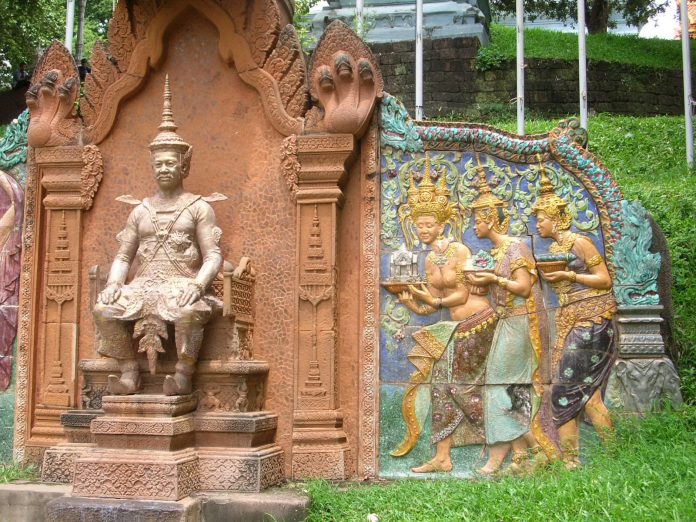 Siem Reap has Chinese-style and French colonial architecture in the Old French Quarter and throughout the Old Market. In the main town, there are numerous museums, classical Apsara dance performances (from Hinduism roots), a Cambodian cultural village, handicraft and souvenir shops, rice paddies in the countryside, silk farms, numerous fishing villages, and a beautiful bird sanctuary near Tonlé Sap, and a cosmopolitan dining and drinking scene. Cambodia’s Siem Reap town, home to the famous Hindu Angkor temples, was installed as the ASEAN City of Culture for 2021-2022 at the recent meeting of the AMCA (ASEAN Ministers Responsible for Culture and Arts) conducted on Oct 22, 2020.

The name “Siem Reap” can be directly translated to mean ‘defeat of Siam’ (siem in Khmer). It is typically taken as a source to an incident in the centuries-old battle between the Khmer and Siamese kingdoms, although this is apparently apocryphal. According to medieval oral tradition, King Ang Chan (1516 CE–1566 CE) had named the city “Siem Reap” after he resisted an army sent to attack Cambodia by the Thai king Maha Chakkraphat in 1549 CE.

The ancient tale maintains that King Ang Chan of Cambodia tried to declare greater autonomy from Siam, which was then fighting internally. The Siamese king Chairacha had been killed by his concubine, Lady Sri Sudachan, who had performed adultery with a commoner, Worawongsathirat, while the king was away managing a campaign against the Lan Na Kingdom. Sudachan then installed her lover on the king’s throne. The Thai nobility lured them outside the town on a royal procession by boat to examine a newly found white elephant. After killing the usurper and Sudachan and their daughter, they summoned Prince Thianracha to leave the monkhood and take the throne as King Maha Chakkraphat (1548 CE–1569 CE).

With the Thais preoccupied by internal problems, King Ang Chan invaded. He took the Siamese city of Prachinburi in 1549 CE, sacking the town and making slaves of its inhabitants. Only then did he learn that monks had settled the succession and that Maha Chakkraphat was the new ruler. Ang Chan quickly withdrew to Cambodia, taking slaves with him. King Maha Chakkraphat was infuriated over the invasion, but Burma had also chosen to attack through Three Pagodas Pass. The Burmese army posed a much more severe threat, as it captured Suphanburi and Kanchanaburi. It then appeared before Ayutthaya itself.

The Thai army succeeded in defeating the Burmese, who quickly departed through the pass. Maha Chakkraphat’s attention then turned to Cambodia. Not only had Ang Chan looted and looted attacked, turning its civilians into slaves, but he also denied giving Maha Chakkraphat a white elephant he had demanded, rejecting even this token of resignation to Siam. Maha Chakkraphat directed Prince Ong, the governor of Sawankhalok, to lead an army to punish Ang Chan and bring back the Thai captives. The rival troops met, and Ang Chan murdered Prince Ong with a lucky musket shot from an elephant’s back. The Thai army fled, and Ang Chan allegedly seized more than 10,000 Siamese fighters. To celebrate his great success, King Ang Chan apparently named the battleground “Siem Reap”, which means ‘the total defeat of Siam.’

In reality, surviving historical sources make this source appear unlikely since they date the dissolution of Angkor to more than a century before this when an army expedition from Ayutthaya sacked and captured Angkor Wat, which start a long era of vassal rule over Cambodia. The 1431 CE occupation coincided with the Angkor decline, though the reasons behind its abandonment are not properly recorded. They may have included failings of the Khmer infrastructure and environmental changes.

From the 16th to the 19th centuries CE, regular infighting among the Khmer nobility led to periodic domination and intervention by both of Cambodia’s more powerful neighbors, Siam and Vietnam. Siem Reap, along with Phra Tabong (Battambang) and Sisophon, major towns in northwest Cambodia, were under the Siamese administration. The regions were collectively known as Inner Cambodia from 1795 CE until 1907 CE when they were ceded to French Indochina. During the 18th century, under the Ayutthaya Kingdom rule, it became known as Nakhon Siam (‘Siam’s city’).

Rebirth of Hinduism and Angkor

Siem Reap was little more than a town when French colonists such as Henri Mouhot “re-discovered” Angkor in the early 19th century. However, European visitors had explored the Hindu temple remains much earlier, including António da Madalena in 1586 CE. In 1901, the ‘French School of the Far East’ (École française d’Extrême-Orient (EFEO) ) began a long relationship with Angkor by financing an expedition into Siam to the neew Bayon. The EFEO took responsibility for restoring and clearing the whole site. In the same month, the first Western tourists visited Angkor, a total of about 200 in just six months. Angkor had been “rescued” from the forests and was assuming its place in the contemporary world.

With the Angkoracquisition by the French in 1907 CE following a Franco-Siamese agreement, Siem Reap began to improve. The Grand Hotel d’Angkor was launched in 1929 CE, and the Hindu temples of Angkor became one of Asia’s leading draws until the late-1960 CE when the civil war kept vacationists away. In 1975 CE, Siem Reap’s population, like all other Cambodian towns and cities, was driven into the countryside by the communist Khmer Rouge.

Siem Reap’s contemporary history is painted by the horror of the brutal communist Khmer Rouge regime. Since Pol Pot died in 1998 CE, however, relative stability and rejuvenated tourist industry have revived the town.