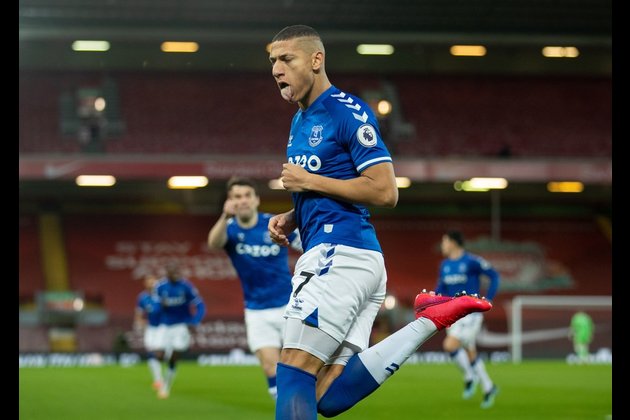 Everton drew level on points with Liverpool in the Premier League, after their first win at their rivals’ Anfield stadium since 1999. Richarlison opened the scoring for the visitors in just the third minute, before Gylfi Sigurdsson sealed the 2-0 win from the penalty spot in the 83rd minute.

Jordan Pickford also had his part in Everton’s historic win with a series of spectacular saves that helped condemn Jurgen Klopp’s side to their fourth consecutive league defeat on Saturday evening.

Chelsea warmed up for next week’s Champions League clash with Atletico Madrid with a 1-1 draw away to Southampton.

The Saints went into the game off the back of six consecutive league defeats, but opened the scoring thanks to on-loan Liverpool forward Takumi Minamino’s well-taken strike just past the half-hour mark. Mason Mount’s 54th minute penalty ensured that Chelsea remained unbeaten since Thomas Tuchel replaced Frank Lampard.

Ademola Lookman’s individual goal gave Fulham a vital 1-0 win at home to Sheffield United, who once again failed to score.

Fulham’s win lifts them just three points behind Newcastle United, who visit Manchester United on Sunday, while Sheffield United remain bottom of the table and 14 points from safety.

Burnley were unable to beat West Brom in a game that ended up 0-0 at Turf Moor. West Brom created chances even though they played with ten men for an hour after Semi Ajayi was sent off for denying Burnley a goalscoring chance with a deliberate handball.

Wolves beat Leeds United 1-0 on Friday night thanks to Adama Traore’s 64th minute effort which took a big rebound off keeper Illan Meslier to end up in the back of the net.