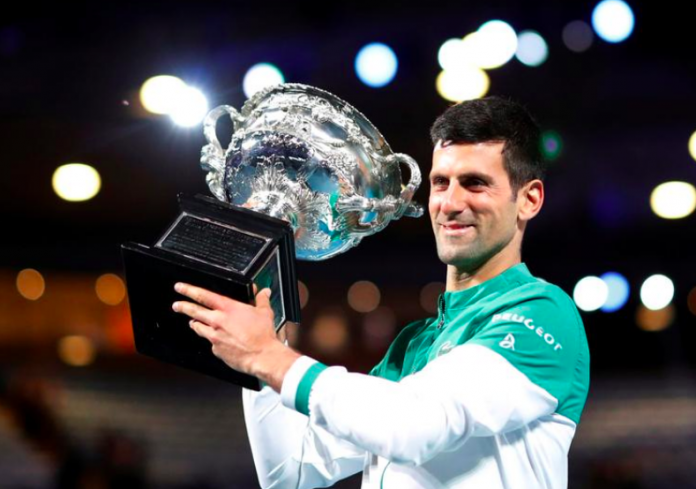 A very different Australian Open comes to a familiar end on Sunday as Novak Djokovic looks to thwart another challenge to his Melbourne Park dynasty from the latest Grand Slam aspirant in Daniil Medvedev.

The tournament has charted a rocky path through the COVID-19 pandemic and a snap five-day lockdown due to a local outbreak robbed it of much of its vitality.

But a comforting sense of normality will pervade Rod Laver Arena when a healthy crowd files in for a final that could mark a shift in the tennis landscape.

Much like the tournament, world number one and defending champion Djokovic has been forced into crisis management at times during his campaign.

Pilloried in the leadup for petitioning organisers to ease strict quarantine protocols for players, the Serb struggled with an abdominal strain sustained in the third round.

His ability to manage the injury was key in bringing him within one match of a record-extending ninth Australian Open crown but he said he was fighting fit after beating Russian qualifier Aslan Karatsev in the semi-finals.

Victory over fourth seed Medvedev would mean an 18th Grand Slam title for Djokovic, pulling him within two of the record 20 shared by “Big Three” rivals Roger Federer and Rafa Nadal.

While the 33-year-old Djokovic has never lost a final at Melbourne Park, his reign has rarely looked so vulnerable.

He suffered a huge scare against Dominic Thiem in the five-set decider last year, and Medvedev is possibly the player he would least like to face.

Not for nothing did Djokovic brand him “the man to beat”.

The rangy Russian has been a machine since November, clinching the Paris Masters, the ATP Finals and the team-based ATP Cup in a 20-match winning streak that has included 12 straight victories over top-10 opponents.

Djokovic was among Medvedev’s victims at the ATP Finals but when the Serb strolls onto his favourite centre court on Sunday, the form-book is unlikely to figure.

With the exception of Thiem’s U.S. Open win last year where Djokovic was disqualified for hitting a tennis ball into a line judge, the “Big Three” have won all the Slams since 2017.

“There has been a lot of talk about the new generations coming and taking over from the three of us but realistically that isn’t happening still,” Djokovic told Eurosport.

“I’m not going to stand here and hand it over to them. I am going to make them work their arse off for it.”

Contesting his second Grand Slam final but first in Australia, Medvedev is hungry for success after being edged by Nadal in a classic five-set decider at the 2019 U.S. Open.

Djokovic might see something of himself in the confident 25-year-old, who boasts similarly elite court coverage, defence and shot-making.

Medvedev has added mental strength to his arsenal, which proved invaluable in his semi-final against Stefanos Tsitsipas as he closed out a tense third set after briefly wobbling in the face of a hostile crowd.

He has also shown willingness to indulge in a bit of niggle, saying the pressure is all on Djokovic as he chases the 20-slam record.

Though Medvedev has won three of their last four matches, he has only met Djokovic once at a Grand Slam, losing in four sets in the fourth round of the 2019 Australian Open.

He said he was happy to be the “challenger” against the “favourite”.

“And he’s one of the greatest players in the history of tennis,” he told reporters.

“So playing the final against him is superb.”

The world number one’s 7-5 6-2 6-2 win on his favourite court secured his 18th Grand Slam title, bringing him within tantalising reach of Roger Federer and Rafa Nadal’s all-time men’s record of 20.

“I would like to thank Rod Laver Arena. I love you each year more and more. It’s been a love affair that keeps growing. Thank you so much,” Djokovic said as he cradled the Norman Brookes Challenge Cup once again.

With a fortune spent to put on a biosecure tournament amid the COVID-19 pandemic, Djokovic came into the Grand Slam under fire after offending the Australian public for petitioning organisers to ease quarantine conditions for players.

He suffered a painful abdominal injury in the first week and had to manage it through the second.

But those challenges were drowned out in the roars of his fans as he thrashed fourth seed Medvedev in a bearpit atmosphere.

“It has been definitely emotionally the most challenging Grand Slam that I ever had with everything that was happening, injury, off-the-court stuff, quarantines,” he said.

“It has been, least to say, a roller-coaster ride in the last four weeks.”

Much like Dominic Thiem in last year’s final, Djokovic faced an opponent desperate for a seat at the Grand Slam table.

Unlike Thiem, who pushed Djokovic to five sets, Medvedev never threatened in his second major final.

Djokovic made a mockery of the Russian’s 20-match winning streak and his pre-match barb that all the pressure was on the champion.

Novak Djokovic went from “persona non grata” to nine-times Australian Open champion on Sunday, with the challenges faced in a roller-coaster month only making the triumph sweeter, the Serbian said.

Defending champion Djokovic drew a lot of flak in the lead-up to the year’s first Grand Slam for petitioning organisers to ease Australia’s strict quarantine protocols for players isolating for two weeks before the tournament.

He then suffered a painful abdominal injury in the first week and had to nurse it to the finish.

“I think emotionally it was one of the hardest tournaments I had,” he told reporters.

“To be honest, with quarantine and a lot of things happening in the media. The letter that I wrote, ideas and recommendations that I got from players was misinterpreted as (a) list of demands.

“Then the next thing you know within a couple of days I’m persona non grata in this country,” the Serbian added.

“I got injured in the third round. It was roller-coaster ride if I can define it in one word.

“I think it makes it even sweeter for me. I’ll take a lot of positives from this tournament without a doubt.”

Having kept quiet about his injury, Djokovic said he had torn an abdominal muscle and still needed to recover from it, despite appearing unimpeded against Medvedev.

Djokovic claimed the win after a difficult, pandemic-affected year in which his public image took a battering for a number of incidents.

He was criticised for organising the controversial Adria Tour in the Balkans last year where players partied and later tested positive for COVID-19.

He was disqualified from the U.S. Open in the fourth round for accidentally hitting a ball into a line judge.

“Of course it hurts,” he told reporters of criticism in the media.

“I have emotions. I don’t enjoy when somebody attacks me in the media openly and stuff.

“Of course, I cannot say I don’t care about it or whatever.

“But I think I’ve developed a thick skin over the years to just dodge those things and focus on what matters to me the most.”

Djokovic extended his unbeaten run to nine Australian Open finals and will eclipse Roger Federer’s record of 310 weeks at world number one next month.

He thanked Australian Open organisers for a “great effort” to host a Grand Slam which had no crowds for five days as part of a snap lockdown in Melbourne to contain a COVID-19 outbreak.

“Look, there are a lot of mixed feelings about what has happened in the last month or so with tennis players coming to Australia,” the 33-year-old said.

“But I think when we draw a line in the end it was a successful tournament for organisers.”

With Sunday’s win, the world number one took his Grand Slam tally to 18, just two shy of Roger Federer and Rafa Nadal’s men’s record of 20.

Djokovic faced a lot of flak in the lead-up to the year’s Grand Slam for requesting that organisers ease strict quarantine protocols for players in Australia.

He thanked the organisers for a “great effort” to host the Grand Slam amid the COVID-19 pandemic.

“Look, there are a lot of mixed feelings about what has happened in the last month or so with tennis players coming to Australia,” the 33-year-old said.

“But I think when we draw a line in the end it was a successful tournament for organisers.”

He also appreciated the efforts of his team and made a special mention of his physiotherapist Ulises Badio for helping him recover from an abdominal strain he sustained during his third round match.

Djokovic also had words of encouragement for Medvedev, whose 20-match winning streak ended with Sunday’s defeat at the floodlit showcourt.

“I really like Daniil as a person, off the court he’s great,” Djokovic said. “Always very friendly … On the court, he’s definitely one of the toughest players that I ever faced in my life.

“It’s a matter of time when you hold a Grand Slam that’s for sure. If you don’t mind waiting a few more years.

“I would like everyone … to appreciate what he has done, 20-match winning streak in the last couple of months. Amazing.”

ATP Finals winner Medvedev acknowledged it was not his best day and hoped he will soon be holding a Grand Slam trophy after losing his second major final after defeat to Rafa Nadal at the 2019 U.S. Open.

“Never easy to speak when you just lost a final of a Grand Slam,” Medvedev said. “But I’ll try to do my best, better than on court I hope.

“Just to tell you a small story, guys. I first practised with Novak when I was like 500-600 in the world in Monaco. He was already number one. Just won Wimbledon.

“I thought okay he’s not going to speak to me or something, because the guy was a God for me. Because I was shy so I didn’t speak. He was asking the questions, talking to me like a friend. I was really surprised.

“It never changed since I was 600 in the world or four in the world, you’re a great sport, great person. So congratulations.”