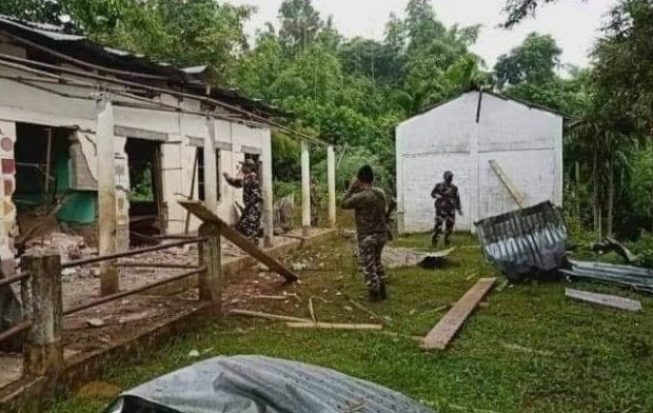 A government school building along Assam’s border with Mizoram was damaged after a powerful bomb exploded in Hailakandi district in southern Assam on Wednesday, the police said.

The police said that the blast triggered at Kachurthal area of Hailakandi district badly damaged the school walls, water tank and boy’s toilets of the Muliwala Lower Primary School.

The police said that no one was injured in the blast as it occurred in the early hours, much before the school opened.

The police are yet to identify the miscreants involved in the explosion. A probe is underway.

Additional security forces have been deployed in the tension ridden area.

There was tension along the Assam-Mizoram border for many weeks in October and November last year, causing injuries to many people in different incidents in Cachar and Hailakandi districts in Assam and Mizoram’s Kolasib district.

Many makeshift huts were burnt down in these border skirmishes.

A series of meetings between the two states and the Central government have been held since 1995 to resolve the boundary problems but the inter-state issues remained inconclusive.

In the run-up to the Assembly elections, six people were arrested in Assam’s Kokrajhar district, bordering Bhutan and West Bengal, and a huge cache of arms and ammunition including five AK series rifles and 8 Chinese hand grenades seized from them, police said on Wednesday.

In a separate incident, Assam Rifles troopers seized over a thousand detonators and gelatin sticks in Cachar district along the Assam-Meghalaya border.

An Assam Police spokesman said that acting on a tip-off, police personnel laid a trap on Tuesday night at Nasraibil village (under Gossaigaon police station) and detained a Scorpio vehicle, which was carrying the arms, ammunition and explosives.

Besides the five AK-56 rifles and the Chinese hand grenades, the other arms and ammunition include 8 AK-56 magazines, 11 underbarrel grenade launchers cell, 300 cartridges, other ammunition and five mobile sets. The police seized the vehicle and arrested six people — Swmkwr Basumatary, Rabinath Narzary, Pungka Basumatary, Mwktang ABasumatary, Manipal Mushahary and Snmanjay Basumatary, all aged between 25 to 35 years old and residents of Sonitpur and Kokrajhar districts.

The driver of the vehicle which was coming from Meghalaya and another person were arrested in connection with the seizures.

On February 1, Baksa district police recovered an AK-47 rifle along with 107 rounds of ammunition, and one Glock pistol with eight rounds ammunition from Barimakha along the bank of Mora Pagladia river.