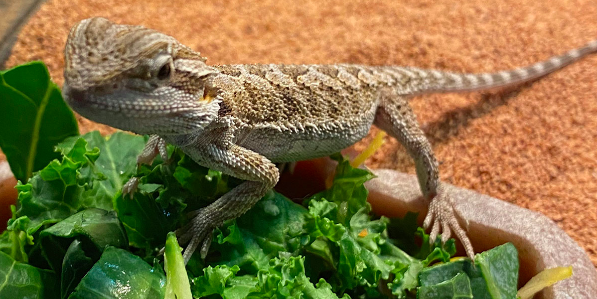 Need a reason to buy a bearded dragon? We’ve got five. Bearded dragons are easily the most popular choice of pet lizard. Although their exterior may seem prickly, these docile lizards are big ole’ softies that are sure to melt your heart. They have many great qualities that make them great pets for both experienced and novice reptile owners. Dogs and cats will soon have competition for the title of most popular pet.  Here are the 5 reasons why bearded dragons make good pets:

Most reptile behavior is solely based on instinct and where their reputation as being cold and rather aloof, stems from. Bearded dragons, on the other hand, are exceptionally intelligent reptiles that act beyond their basic emotions of survival. Beardies, as they’re affectionately called, are curious and inquisitive. They like to be in-the-know and are very observant of their surroundings. Their above-average intelligence also allows bearded dragons to recognize their caretakers, which might be the closest reptiles come to displays of affection. This ability lends itself to other cute behavior that makes this animal so endearing.

They can be affectionate

Whether reptiles are capable of feeling love for their owners or not is a hotly debated topic. Nevertheless, bearded dragons are quite capable of displaying a level of attachment or ease with their owners. There are numerous stories of bearded dragons being cuddly; laying in the crooks of arms, necks, or on chests. Their calm and non-aggressive behavior makes them very tolerant of being held and petted. So at the very least, beardie owners are able to lavish their reptile pet with love.

Bearded dragons are diurnal, they sleep at night and are most active during the day. This is a stark difference from most other reptiles that are nocturnal. Why does this matter? Since bearded dragons’ active periods are closely aligned to our own as humans, owners have more opportunities to catch their scaly friends in action. Plus, being the curious little things that they are, beardies are always checking out their surroundings. This makes them fairly active compared to other reptiles. Don’t be surprised if your bearded dragon pokes its head out when you get home, curious to see who’s at the door.

Bearded dragons are fairly self-sufficient creatures that don’t require much by means of fancy light setups or temperature settings. Since they are desert dwellers a simple high heat and high-intensity UVB bulb will do. Although these lizards are significantly larger than the ones you might see in your backyard, they don’t require a lot of space to house. Most adults can comfortably be housed in a tank that’s between 40 and 55 gallons, which can fit even in a modestly sized apartment. In terms of their day-to-day care, beardies keep it easy only eating a mixture of greens and insects.

Owning one is pretty inexpensiveA pet doesn’t have to be a major burden on your wallet. The most expensive part of owning a bearded dragon is the initial setup. These are costs like buying the terrarium, bedding, lighting, and temperature controls. After the initial set up, they’re quite cheap in the day-to-day maintenance as they primarily eat bugs like crickets and grubs. Of course, then there’s the cost of buying a bearded dragon itself.  They are relatively inexpensive compared to some other reptile species and on average, cost between $100 and $200.  There are many places to find bearded dragons for sale, but bear in mind that the price of a bearded dragon can vary based on the rarity of the breed.