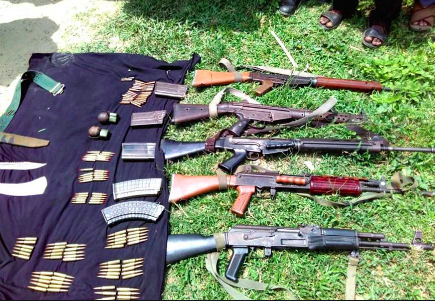 Four Bangladesh-trained Tripura militants on Thursday surrendered to the security forces in the state after they fled from their camps across the border on January 31, police said.

An official statement from the police headquarters said that during preliminary interrogation, it has been revealed that the tribal guerillas have joined the outlawed ourfit NLFT in 2018 and 2019 and then trained in Bangladesh Camp.

“The extremists told the police officials that they realised that their so called fight for independence of Tripura is totally a farce attempt and has no future prospect towards overall development of tribal people of the state. Presently, the NLFT outfit has been facing serious financial and organisational crisis. They also got fedup with the group due to “jhum” cultivation (shifting farming) and other hard fatigue duties at the behest of their leaders who are enjoining luxurious lifestyles,” the statement said.

“Feelings frustrated with the present predicament of NLFT outfit and continuous pressures and motivation of Tripura Police, they joined the mainstream of the society,” the statement said quoting the surrendered extremists.

The NLFT extremists had recently killed a small trader and kidnapped three border fencing workers in Tripura but released the three hostages after 17 days of captivity. Supervisor Subhash Bhowmik, 48, JCB driver Subal Debnath, 37, and worker Gana Mohan Tripura, 37, were kidnapped by the NLFT ultras from Malda Kumar Para in eastern Tripura’s Dhalai district while they were engaged in border fencing work along the international border.

The NLFT militants had whisked away the three hostages to Bangladesh since the crime spot was just along the international border. The government-owned National Building Construction Corporation was assigned the task to put up a barbed wire fence along the India-Bangladesh border to check crimes and infiltration.

Meanwhile, the Tripura police recently recovered the mutilated body of trader Litan Nath 50 days after he was kidnapped at gunpoint by terrorists from the northern part of the state. Inspector General of Police (Law and Order) Arindam Nath said that the slain Nath’s body was recovered by the police from a forest in the Khedachara area in North Tripura district.