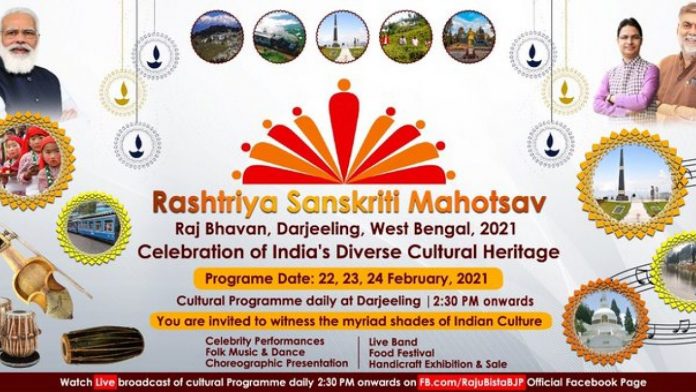 The closing ceremony of the three-day even will be attended by West Bengal Governor Jagdeep Dhankar.

A choreographic presentation by Odissi Vision and Movement Centre followed by recitals by Dona Ganguly (Odissi), Michael (Saxophone) and Shayne Hyrapiet (Band) will mark the beginning of the event on first day while on second day, Sounak Chattopadhyay will recite Rabindra Sangeet followed by a creative dance recital by Saphire Dance troupe and the North eastern band of Daniel Engti and Kamran and the Boyz Band. The last day would witness Bail songs by Anuttam Baul after which Kathak Ballet by Sanskriti Sreyaskar would be held.

Local artistes will also perform on all the days and 20 crafts stalls from across the country showcasing genuine hand-crafted products will also be setup.

The Rashtriya Sanskriti Mahotsav is being organised by the Culture Ministry since 2015. Till now 10 editions of RSM have been held in Delhi, Varanasi, Bengaluru, Tawang, Gujarat, Karnataka, Tehri and Madhya Pradesh. It will also cover a profusion of folk-art forms.