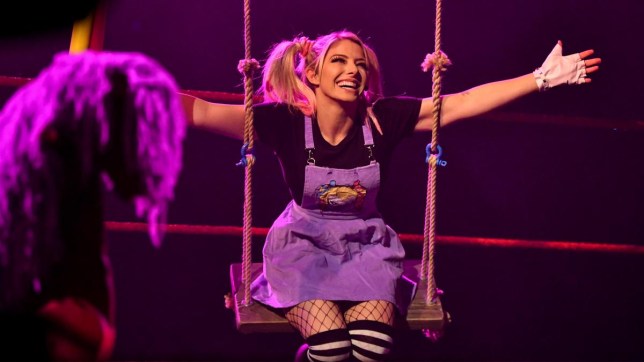 It’s another New Year for WWE, but you’d never guess it from the names at the top of the card. As is becoming traditional for the world’s largest pro wrestling promotion, they began the year by bussing in as many legends from the past as possible in the hope of popping a rating for their first RAW of 2021. There is such a thing as the law of diminishing returns, and WWE ought to be very familiar with it by now. If you bring back a star name once or twice over a long period of time, you can expect to see a reaction from fans. If those same star names are on the show five or six times a year, the effectiveness of bringing them back is reduced. At the risk of sounding foolish when ratings are published, we doubt that the ‘one night only’ return of Hulk Hogan and Ric Flair will have pushed viewership above the three million mark that WWE once took for granted.

Having brought the legends back to town for one night only, WWE didn’t actually do very much with them while they were there. Most of them stood around in the backstage area doing almost nothing. Some, like Tatanka and Jeff Jarrett, didn’t even get a line of dialogue in. Mark Henry, once billed as the “world’s strongest man,” was made to look stupid by standing around on a scooter and getting belittled by Randy Orton – no spring chicken himself. The Big Show, a legitimate giant, was also provoked by Orton and did nothing about it. Melina, Molly Holly, and Mickie James didn’t appear to know why they were there at all. That would have been a weird use of the stars of the past if that were all the company did, but things got even weirder in the final segment of the show.

As you’ll have seen or read by now if you’re a wrestling fan, the episode was capped by Goldberg making yet another comeback to challenge reigning WWE Champion Drew McIntyre. Nobody has seen Goldberg since last year’s WrestleMania, where he was squashed by Braun Strowman and lost the WWE Universal Championship. Now, for reasons that aren’t clear, he’s automatically entitled to a shot at the title the Scotsman is holding. Based on social media reactions, the prospect of McIntyre and Goldberg throwing down at the forthcoming Royal Rumble pay-per-view isn’t something that WWE fans are looking forward to. They’re tired of 54-year-old Goldberg’s repeated comebacks, and they’re even less enthused by the thought that he might topple McIntyre and go on to face Roman Reigns at this year’s WrestleMania in a title versus title match.

The problem with pushing Goldberg over the present stars is that it devalues them, and there’s no payoff for it. Everybody knows Goldberg isn’t going to stick around for a long run, and so McIntyre won’t get the opportunity to beat him back if Goldberg wins. That will damage the standing of McIntyre after a year of solid building. “The Fiend” Bray Wyatt has never fully recovered from losing the Universal Championship to Goldberg in Saudi Arabia last year. The loss destroyed the character’s aura of invincibility and ruined its mystique, and Wyatt never got a rematch. Goldberg simply moved on and then disappeared from television for almost a year again. The same will happen to McIntyre if he’s squashed to make way for a Reigns vs. Goldberg match that, for reasons best known to himself, Vince McMahon believes will drive interest for WrestleMania this year.

Speaking of the Fiend, he wasn’t even on the show this week. That makes no sense. At the end of the previous episode of RAW, the cliffhanger was Randy Orton holding a lit match and seemingly threatening to burn Alexa Bliss, the Fiend’s ‘companion,’ to death. That was a follow up to Orton apparently burning Wyatt himself to death at the TLC pay-per-view. Instead of delivering the payoff that viewers had waited a week for, RAW opened with a bizarre promo from Hulk Hogan talking about, of all things, his phone. It was a limp way to begin and demonstrated how little WWE cares about coherent storytelling these days. We had to wait until halfway through the show to hear from Orton that he decided not to start the fire in the end. We didn’t see Bliss. We didn’t see the Fiend. We didn’t see anything to tell the audience that it was worth maintaining an interest in that story anymore. All of that was sacrificed to make room for stars from yesteryear, and even they (with the exception of Goldberg) weren’t featured prominently.

WWE’s chronic over-reliance on names from the past to draw ratings and appeal to fans has been a problem for a very long time now. We see it every year at WrestleMania. We even see it in smaller ways, for example the fact that the official range of WWE-themed UK slots is built around ‘legends’ as opposed to the current roster. WE can’t fault WWE for wanting to make money from online slots because everybody seems to be at it these days, but the names featured on their online slots are eyebrow-raising. Shawn Michaels is the star of one of their online slots. Hogan has his own online slots game, and so does “Stone Cold” Steve Austin (conspicuous by his absence last night). Drew McIntyre, the current WWE Champion, has not been given his own online slots game. In every possible way, WWE is telling us that the company isn’t what it used to be. That doesn’t make much sense in the present. It will make even less sense in the future when it isn’t possible to bring back the old-timers anymore, and there’s nobody to replace them with because no new legends have been created.

Fewer people are watching wrestling now than at any point in the past thirty years. WWE’s audience has, for the main part, either aged out or moved on. The company badly needs to position new talent at the top of the card and keep them there, and that means cutting ties with the past. There’s no harm in bringing old favorites back every now and then if there’s a sensible reason for doing so, but building a whole show around them is nonsense, and putting them in world title matches on major pay-per-views is nonsensical. It’s to be wondered how much longer the company can limp on in this sorry state.