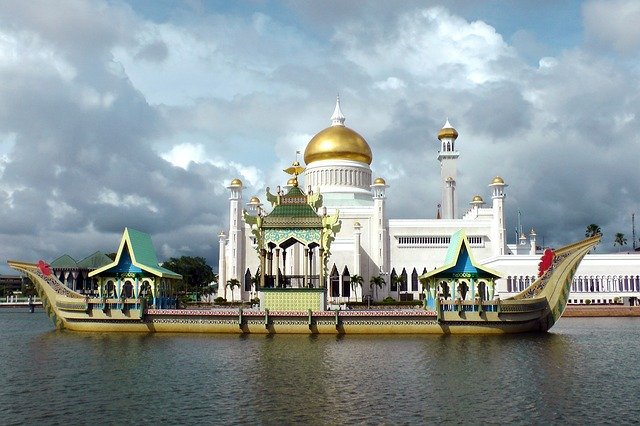 The small sultanate of Brunei is just a part of a naval empire that once ruled all of Borneo and part of the Philippines. Nevertheless, this laid-back Darussalam (Arabic for the place that houses peace’) has one of the biggest oilfields in Southeast Asia.

Look below the surface of this tightly controlled sultanate, and you’ll see the carefully conserved wildness of its pristine environment. Thanks to the vast oilfields’ profits, Brunei hasn’t turned its evergreen rainforests into commercial palm-oil plantations.

How to reach Brunei?

You can ride your car into Brunei from Sarawak in Malaysia. There are two entry points for Brunei, one from Limbang at Kuala Lurah and one from Miri at Sungai Tujuh. Both these passages have drive-through immigration checkpoints at the border, but queues can be long, particularly during weekends.

Brunei’s main airport is Brunei International Airport (BWN), the national carrier Royal Brunei Airlines hub. The airport itself is small but functional and clean. You can land in Brunei directly from Kuala Lumpur, London, Kota Kinabalu, and Singapore. There are also frequent flights to Hong Kong, Melbourne, Surabaya, Jakarta, Manila, Bangkok, and Shanghai.

Named after Brunei’s 28th Sultan, Masjid Omar Ali Saifuddien is enclosed by an artificial lagoon that serves as a reflecting pool, reflecting its gleaming golden domes. This being Brunei, the inside is almost as lavish as the exterior:

The mosque’s 52m-high tower makes it the biggest building in central BSB, and woe betide anyone who tries to beat it – apparently, the nearby Islamic Bank of Brunei building initially exceeded this height and so had the top floor removed by order of the dictator sultan. The stately stone boat sitting in the lagoon is a copy of a 16th-century royal barge (mahligai).

When called upon to present a gift to Brunei’s sultan, you must necessarily confront the question: what do you present a man who has everything? At this charming, dome-capped museum, you’ll see how heads of state have solved this puzzle. Offerings range from portraits of the sultan killed in semiprecious stones, a silver model of Angkor Wat, and gold models of oil wells.

Labi is a tiny Iban settlement about forty km south of the coastal road with 4 longhouses: Rampayoh, Mendaram Kecil, Mendaram Besar, and, at the edge of the track, Teraja. How much of a longhouse you can see if you go without a guide will depend on whether an English speaker is there to show you around. To tour the Toraja longhouse, file a request at the police station nearby.

Brunei amended its penal code in 2014, forcing Sharia law in three phases. Sharia law within Brunei has moved on to its second phase. The second phase makes penalties for crimes such as adultery, thievery, homosexuality, and apostasy much more rigid and imposed over a much greater span of people. After implementing the second phase in early April 2019, Sharia law is applied to both foreigners and non-Muslims alike. Here are a few things to know before you visit brunei:

What to eat in Brunei?

Bruneians love to go out and eat, and there are many wonderful restaurants in Brunei serving a broad assortment of cuisines, thanks to a large number of foreigners working in the nation.

There is also the regional nasi katok, a simple blend of rice and curried chicken or beef, which can be somewhat spicy. It is relatively cheap when compared to other food that you can buy, for example, local food such as chicken with rice. Sadly, Brunei is a dry country and Alcohol is banned.