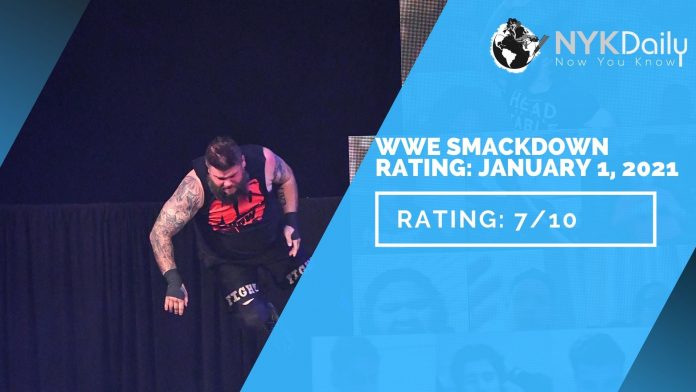 WWE Smackdown Review for 1st January 2021 is brought to you a little late because of New Years. My New Years’ Resolution is to review WWE Raw, Smackdown, NXT and AEW shows every week.

After scoring another questionable victory over Kevin Owens inside the Steel Cage on the fantastic Christmas edition of SmackDown last week ( it was 9/10 according to me), The Big Dog came to the ring to remember 2020 and honor those near him, including the mad scientist Paul Heyman and his brother Jey Uso.

However, Kevin Owens soon interrupted mocking The Head of the Table before notifying Roman Reigns and Jey Uso that he would be going to WWE Official Adam Pierce to secure a match of redemption against Reigns’ unhinged cousin.

Notes: Brilliant start to the first WWE event of 2021, continuing the hottest rivalry in WWE Smackdown, with Kevin Owens looking for revenge against Jey.

After defeating Sami Zayn to retain the Intercontinental Title in one of the most prominent wins of his career on 25th December, Big E fought Corbin in their announced one-on-one matchup – with the self-proclaimed “Master Strategist” sitting with the SmackDown announce team.

However, when it seemed like Big E was about to fight off Corbin and win the bout, Sami Zayn quickly attacked and brought an end to the match by a predictable disqualification. The Powerhouse of Positivity soon found himself experiencing a 3-on-1 assault at the hands of The Knights of the Lone Wolf and Sami Zayn. Until, all of a sudden, babyface Apollo Crews emerged to clear the ring of all competition.

As a result, Big E joined together with Apollo Crews to take on Sami Zayn and Corbin. When The Lone Wolf grew disappointed with Zayn trying to run the show and almost hitting him, King Corbin and his minions chose to take a walk and leave Sami Zayn out to dry. Apollo Crews opened the door to win the match with a ‘perfectly executed’ Spinning Sit-out Powerbomb. Both the matches went for a total of eight minutes.

Match Review: 2.5/5. It was an average match with king Corbin heavily featured as a heel yet again. He doesn’t excite me as a fan, and I would like to see a change in his persona before it is too late. Big E and Sami Zayn continue to impress. I was happy to see Apollo Crews in action with a beautiful Spinning Sit-Out Powerbomb to win the match. He needs to be featured in longer matches.

Tamina & Natalya Vs. The Riott Squad

Although Billie Kay believed she might find a partner to team with her once again against The astonishing Riott Squad, she somewhat unintentionally inspired an unlikely alliance between Tamina and Natalya, as they appeared together randomly for a match against Ruby Riott and Liv Morgan.

During the fight, Billie waited at ringside, although it was unclear which team she was backing. Then, Billie got up on the ring steps. This distracted Tamina long enough for Liv Morgan to roll her up for a roll-up to death three-count. However, when Billie decided to celebrate with The Riott Squad, they chose to leave without her. The match went for around three minutes.

Match Review: 1/5. They tried, but I wasn’t interested. It was kept short, and roll-up to death finish is not something I wished to see in 2021.

Sasha Banks and Bianca Belair Vs. Bayley and Carmella

When Bayley and Bianca fought outside the ring, Reginald got himself engaged in the action. Moments after Sasha delivered a tight slap to Reginald on the apron, Carmella used the diversion to plant Sasha Banks face-first into the canvas and pin the SmackDown Women’s Champ! This match went for about 10 minutes.

Match Review: 2.75/5. A good tag team action with a distraction assuring a pinfall victory for Carmella and Bayley.

The Street Profits’ “New Year’s Day Smoke-Tacular” included a drum solo accompaniment by Angelo Dawkins and 2021 predictions, including Dolph Ziggler getting the nickname “The Heartache Kid” and their “I WAS Intercontinental Champion” shirt will start selling on WWE Shop and become the No. 1 T-Shirt of 2021.

But the celebration was cut short with a fierce sneak attack by Ziggler and Robert Roode, including a chair assault that appeared to cause a serious injury to Montez Ford’s knee.

Daniel Bryan and Otis Vs. Cesaro and Nakamura

One week after Daniel Bryan declared his participation in the Royal Rumble Match, The Leader of the “Yes!” Movement prepared for the massive match by teaming with the Alpha Academy’s “Blue-Collar Solid” against Cesaro and Shinsuke Nakamura.

The Swiss Cyborg and The Artist knocked Otis from the ring. However, when they turned their attention to Bryan, Cesaro was knocked from Bryan’s Running Knee ring. And with his partner gone, Nakamura was forced to tap out to the ever so deadly “Yes!” Lock. The match went on for around 11 minutes.

Match Review: 3.5/5. A very good match with Daniel Bryan again, proving why he is the best in the world. Will Bryan win the Royal Rumble? Maybe! I won’t complain.

After Roman Reigns help on to his Universal Championship against Kevin Owens in questionable fashion last week, Kevin Stee..Owens claimed that the Head of the Table needs Jey to save the title and challenge “Main Event” Jey Uso to a match.

After overcoming Uso with the Stunner, Owens handcuffed his vanquished opponent to the ring ropes and continued to punish him for getting Reigns to come to him.

But when he handcuffed Uso’s hands together and looked to maintain the onslaught out in the WWE Thunderdome, The Big Dog predictably ambushed him. Together, Roman Reigns and Jey Uso absolutely destroyed Kevin Owens, slamming him into the LED screens before The Big Dog threw his opponent off a ledge, sending him smashing down through a table. The match went for around 7 minutes, and then the handcuff drama followed.

Match Review: 2.5/5. A good short match with a brilliant after match beatdown by the best heel in WWE today (Orton is also there right at the top). I know Roman Reigns and Kevin Owens have battled each other numerous times already, but I am not complaining. This rivalry is fantastic, and I am looking forward to seeing one final match. Will Kevin Owens win the championship? I doubt! But this is cementing Roman Reigns as the top heel of WWE, and I am all for it.