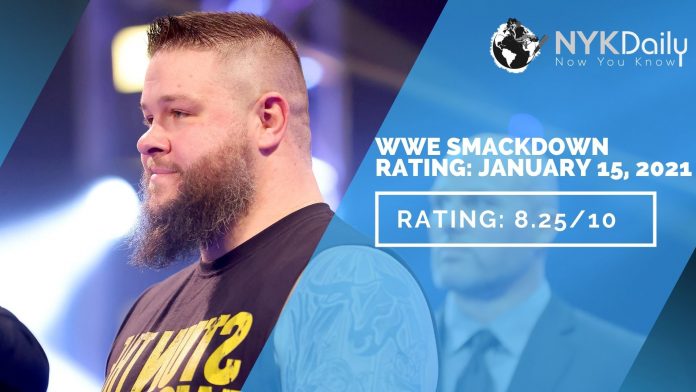 We start with a recap of how Adam Pearce became the number 1 contender on last week’s Friday Night Smackdown edition.

The camera moves to Roman and Paul Heyman backstage. Roman just got the contract for his match against Adam before SmackDown went on air, which Roman is holding. Paul Heyman tells Roman to pay the contract no mind because it’s just a typical WWE lawyer, cookie-cutter BS that he need not concern himself with.

However, he suggests to Roman Reigns that he pick a condition that reached Adam about respect. Heyman offers to handle this and take it off his hands. Roman Reigns hands, Paul Heyman, the contract, and Paul says consider it done.

Here comes Jey Uso, and he issues a warning to Adam Pearce at the Royal Rumble and how he should be thanking Roman for making him important. Uso also says that the bloodline will continue to expand because he officially declares for the Royal Rumble and announces that he’ll go to RAW and win the WWE Championship when he wins.

He also says that he has unfinished business with Nakamura. He applauded his performance in the gauntlet match last week, but he says Nakamura should thank Jey Uso and Roman Reigns because they allowed him to last week. Shinsuke may be the King of strong style, but let’s see how strong he is. Cross the bloodline, and you’ll be leaving the building in a stretcher.

Nakamura enters the ring with his old ‘Face’ theme song that I’ve always loved. He then tells Jey Uso that if Roman Reigns is the big dog, it makes him a puppy before striking him with a Nakamura special kick.

Nakamura accidentally ran headfirst into the ring post, and Jey Uso quickly took full advantage with the pin attempt. However, when he put his legs on the ropes for support, the official spotted it and waved off the three-count. An angry Uso began arguing with the ref, giving The Artist the opening to take over and hit a Kinshasa for an impressive victory. The match went on for around 13 minutes.

Match Review: 3.75/5. The ‘face’ Nakamura returns in style with an impressive victory against Jey Uso. I enjoyed the in-ring action, and I can’t wait to see how Nakamura performs at the Royal Rumble. The match was brilliant.

In the wake of The Riott Squad’s last week’s victory over Tamina and Natalya, Liv Morgan went one-on-one with Natalya.

When The Queen of Harts gained the upper hand and excited (and recently inducted Riott Squad member), Billie Kay left SmackDown commentary to push Ruby Riott to intercede. As she began extravagantly cheering, she found herself in Tamina’s way. Panicking, Billie opted to run through the ring to getaway. However, the confusion allowed Natalya to roll up her opponent for a quick victory.

The match ended in 5 minutes.

Match Review: 1.5/5. It was a good match while it lasted, but I wouldn’t say I liked the finish. I am tired of roll-up endings to wrestling matches.

After weeks of tormenting the Mysterio family, including a brutal, unprovoked attack in last week’s Gauntlet Match, King Corbin found himself in a battle against Rey Mysterio, with Dominik joining the SmackDown commentary team.

When King Corbin put his hands on Dominik Mysterio numerous times during the match, Rey Mysterio’s son lost his temper and started to charge into the squared circle. The Master of the 619 was compelled to hold him back, and the confusion paved the way for King to win with End of Days. The match ended in 6 minutes.

Match Review: 2/5. It was a typical King Corbin match where he tried all the heelish techniques to distract Rey Mysterio. Is this a slow build-up towards Dominik Vs. Rey Mysterio at Wrestlemania? It would make an entertaining match for sure.

Cesaro countered Daniel Bryan’s Running Knee with an earth-shattering uppercut into the Neutralizer for a massive victory in the final moments of their incredible matchup!

The match went on for 12 minutes.

Match Review: 4.25/5. WOW! I have no words. With Daniel Bryan enjoying creative control, he is pushing young talents by letting them shine against him in fantastic wrestling matches. Last week it was Nakamura, and today we saw Cesaro shining against the founder of Yes! Movement. Leave everything and watch this match.

Sami Zayn once again showed up with his own documentary crew, tasked with flashing light on the kayfabe conspiracy against him as The Master Strategist has continued to flood WWE Management with demands for an Intercontinental Title rematch.

Meanwhile, Apollo Crews was no doubt still reeling from a strict pep talk he received from Paul E on a last week’s Talking Smack over how he messed up in his title match against Big E. He was also spotted earlier by the WWE camera team in the evening having a chat with Universal Champion Roman Reigns.

Regardless of his talk with The Big Dog entailed, the match result was unknown. Crews chose to grab his Sami Zayn’s tights and got himself the victory at any cost. The match went on for 4 minutes.

Match Review: 1.5/5. It was a quick match with Crews turning heel by cheating to defeat Sami Zayn. What’s next in store for Sami? I would like to see him in 12-15 minutes wrestling matches with no interruptions.

Adam Pearce announces Kevin Owens as his replacement to challenge Roman Reigns at the next PPV.

Throughout the night, Universal Champion Roman Reigns and his special counsel Paul made changes to The Big Dog Roman Reign’s Universal Title match contract against WWE Official Adam at Royal Rumble. They demanded that Pearce sign that contract in the ring at the top of the night.

Just after Roman Reigns and the WWE Official signed the contract, Adam Pearce noted that he had been waiting all night for Roma Reigns to sign. Then, as he walked up the ramp with a smile, he abruptly began to limp as an old knee injury began to “creep up,” one that would bar him from competing against The Big Dog at the January 31 pay-per-view, Royal Rumble.

However, if one member of the main event is injured and could not compete, WWE could choose a suitable replacement, and a smiling Adam Pearce did just that. As a result, Roman Reigns’ new opponent at Royal Rumble would be none other than Kevin Sheen… Kevin Owens! Incredible.

3 Stars of the Show

Top 5 Stipulation Matches in the WWE