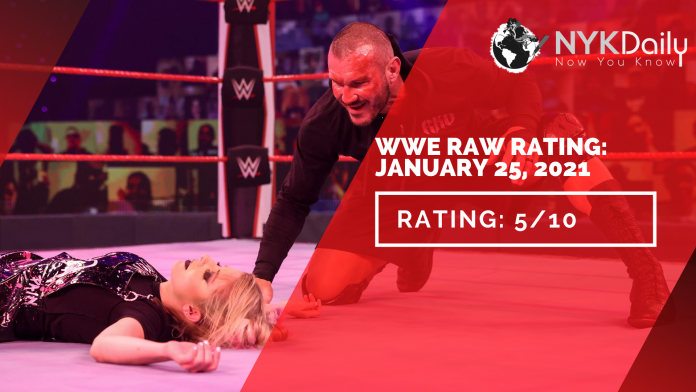 Drew McIntyre starts the show and says it feels great to be back on Monday Night RAW. He shows his gratitude to everyone for their love and support while he was out with Coronavirus. He talks about being lucky because of no symptoms and says he’s back at 100%. His fight on Sunday is devoted to everyone who has the COVID-19. Drew McIntyre says we’re all going to get through this phase and beat it. Drew says, speaking of things he has grown tired of, Sunday’s match will be against Bill Goldberg. Drew talks about watching Goldberg since he was a child, how he built up his remarkable streak, ran through The Rock, and other ProWrestlers until he just retired, for years. Drew says the last thing to go in a heavyweight fighter is their strength, and Goldberg returned a formidable fighter as he had been. Drew talks about how Bill has just always won, but that ends this Sunday as Drew will complete the other streak and hold on to the WWE Championship Gold. Drew goes on, but the music interrupts, and outcomes John Morrison and The Miz.

Miz and John Morrison mock Drew over the match and theorize that he or Bill may end up injured before the end of the fight. Then what would be next? Miz says whoever is left standing at the end of the fight will be a sitting duck as he will hit the ring and beat the hell out of the winner. Miz says he will cash in his Money In the Bank briefcase and win the WWE Championship. The music interrupts again, and Goldberg is here as Drew looks on. Miz and John Morrison watch from the apron.

Goldberg enters the ring and gets in Drew McIntyre’s face, telling him he’s next at the Royal Rumble. Mics drop, and they stare each other down as Miz and John Morrison interrupt from the apron. Drew suddenly pulls Miz in while Goldberg pulls Morrison into the ring. The virtual crowd is loud for this one. Goldberg drops Miz with a Spear and Drew, then levels Morrison with an impressive Claymore. Goldberg and Drew go back to facing off in the middle of the ring. Drew Mcintyre raises the WWE Title in the air as they exchange words.

Another obstacle awaits The Queen this week as Charlotte teams up with Dana and Many to fight Nia, Shayna, and Lacey.

Before the six women tag, Charlotte tried to keep her concentration in the ring with Shayna Baszler despite Lacey Evans’ recent actions with her father, Ric Flair, but The Queen of Spades had her own plan. With Nia Jax at ringside, the heels ganged up on Flair until Dana Brooke, Mandy Rose, and Lacey joined the fray to bring disorder.

Following a break in the action, a Six-Woman Tag Match followed, with Flair finally getting her shot against Baszler. The Queen used her father’s chops to slow down her opponent’s charge, followed by an extraordinary power display with a fallaway slam. As more violence ensued outside the ring, Baszler could not beat the official’s count, but Adam Pearce ruled to restart the match. (felt like a botch) With the fight underway once again, The Sassy Southern Belle found herself on the receiving end of the aggression. As Charlotte went hunting for Lacey Evans, Nia targeted Dana in the ring and splattered her with a botched slam and a Hogan special leg drop for the win. The entire thing went for around ten minutes or so.

Match Review: 1/5. It felt like another Nia Jax botch, which nearly injured Dana Brooke. WWE is trying to show a more ‘fan-favorite’ Charlotte, but chaos is not helping.

Xavier Woods’ battle with RETRIBUTION raged on, as The New Day bandleader took on SLAPJACK. In recent battles with T-BAR and MACE, the numbers game surprised Woods without Big E and Kofi Kingston in his corner. This week, Xavier Woods was shot out of a cannon looking to get on the fight early. Xavier Woods successfully defied the odds with a crushing Shining Wizard to SLAPJACK, but the real pain followed as RETRIBUTION entered the ring. Ali announced his evil intentions for The New Day and announced himself for the Royal Rumble Match. The match went on for nearly 4 minutes.

Match Review: 1.5/5. Finally, Xavier Woods win. I am happy for him. He is a talented wrestler deserving of an upper mid-card push. The in-ring action was smooth, with Slapjack selling the finish well. Both these wrestlers impress me.

The Miz & John Morrison Vs. Sheamus – 2-on-1 Handicap Match

After declaring for the Royal Rumble Match earlier tonight, old rivals John Morrison and Sheamus met in the ring, hoping to gain momentum going into the Rumble. The Celtic Warrior tried to meet The Prince of Parkour’s high-flying action, butJohn Morrison targeted his opponent’s knee to ground him. Sheamus finished off the victory with an extensive White Noise to Morrison, but The Miz wanted his own opportunity to get into the mix.

Miz and John Morrison were set on leaving Sheamus hobbled and humbled before the three men entered the Royal Rumble. The Celtic Warrior crawled his way through it and presented an unbelievable rolling senton of Miz into Morrison. Sheamus landed a Brogue Kick on John, but The A-Lister was on the spot for a Skull-Crushing Finale for victory. The two matches went on for around 18 minutes.

Winner: The Miz and John Morrison

Match Review: 3.75/5. The first match between Sheamus and John Morrison was impressive. John Morrison is still outstanding when he gets more than 10 minutes against an opponent. WWE should utilize him more. The second match was all about number game advantage, with The Miz finishing the battle. Sheamus is one of the most underrated pro wrestlers against a smaller opponent.

R-Truth came into Raw looking for a birthday present and a trip to Royal Rumble, but The Hurt Business and AJ Styles left with neither. After a disappointing trip to The VIP Lounge, R-Truth tried valiantly to take down The Phenomenal One, but Olmos scared the 24/7 Champion every which way. R-Truth channeled his childhood hero John Cena for a Five-Knuckle Shuffle, but Styles regrouped to lock in a Calf Crusher hold to force the tap out. The match ended in 3 minutes.

Match Review: 1.75/5. It was a short match with a predictable finish that was all about giving AJ the opponent before the Royal Rumble this Sunday.

Riddle has been trying to bang down the doors of The Hurt Business for weeks, and The Original Bro ran the gauntlet to earn an opportunity at Bobby Lashley and the United States Title. After a hit and run on MVP earlier in the night, The Hurt Business was out for blood against Riddle. The Original Bro would step up to the first challenge against Shelton Benjamin as turmoil reared its ugly head between the Raw Tag Team Champions, and Riddle capitalized on the argument to pull off a wild roll-up to pass his first test.

With the shouting match carrying on between The Hurt Business, Riddle sprung into action with a heel hook on MVP to force the tapout and a quick advance to the final round of the Gauntlet Match. Alexander’s athleticism seemed to be too much to handle for the winded Riddle, but Riddle improbably kicked out of a brainbuster and reached deep for one more improbable roll-up to grit his way to the final win. While Riddle was ready for the celebration, the United States Champion was ready to deliver pain with a Hurt Lock for his upcoming challenger. The match went on for 17 minutes.

Match Review: 3.75/5. WOW! This was Riddle’s best match on the main roster. He got a lot of minutes to shine. The match revolved around Riddle showing off his moves, selling power, and endurance against the Hurt business. He should win the United States Championship this Sunday.

Alexa Bliss’ dark, twisted journey brought her to a Raw Women’s Title Match against Asuka on the red brand. After a chilling visit to Alexa’s Playground last week, Bliss had even more demons waiting for The Empress of Tomorrow in their title showdown. Asuka had her hands full trying to overcome Bliss’s split personalities, as The Goddess reemerged, crying late in the match as consciousness seemed to snap back into the Superstar. As the lights dimmed, a possessed Bliss appeared, and just as the demonic figure was ready to lock in a Mandible Claw on Asuka, Randy Orton arrived out of nowhere. The Viper struck with an RKO and left Bliss’ nightmarish vision of bringing a title to Alexa’s Playground crushed. The match went about 12 minutes.

Match Review: 2/5. The match was more about Randy Orton’s revenge against The Fiend controlled Alexa Bliss. The RKO looked fantastic in the end. Asuka needs a solid rivalry and I guess Royal Rumble is a decent start. Will Alexa Bliss win the Women’s Royal Rumble? I guess so. Let’s wait for this Sunday.