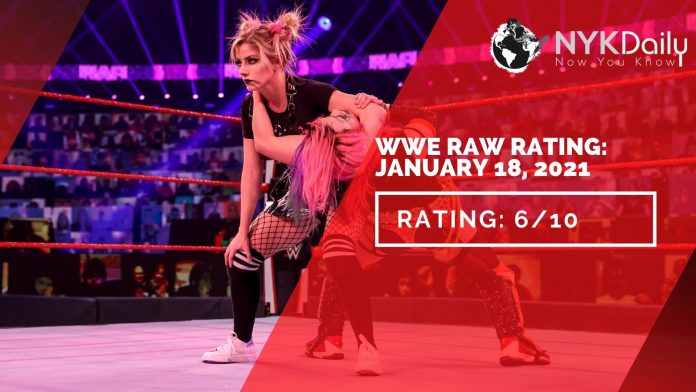 After an unexpected fire onslaught at the hands of Alexa Bliss last week, Randy appeared in the darkness wearing a mask that covered the fire injury. Calling the episode the “damnation [he] received for showing compassion,” The Viper revealed the last bit of sympathy was now gone and that he would wear the mask, not only to protect himself but also to shield everyone else from the horror he experienced.

Rather than blaming Alexa Bliss, Randy Orton blamed The Fiend for giving her the idea. But despite his harrowing experience and the pain he felt, The Legend Killer announced that nothing would now stop him from doing what The Fiend didn’t want him to do – namely winning the Royal Rumble Match and going on to headline WrestleMania.

Royce went on the attack as Charlotte made her entrance and lit the fuse on a pre-match brawl that singled just how aggressive and personal their subsequent showdown would be. Then, in a vital moment, Lacey emerged alongside “The Nature Boy” and wearing Ric’s robe, which momentarily drew Charlotte’s focus and allowed Peyton to pick up the pin nearly. Despite the distraction, however, The Queen simply used her anger to raise the stakes. She made her opponent tap out to the Figure-Eight Leglock and didn’t let go with the sound of the bell to send a definitive message to Lacey. The match ended in 12 minutes.

Match Review: 3/5. A good match with an obvious outcome. I would’ve liked to see Charlotte winning a little quicker against Peyton Royce. Charlotte had lost a couple of matches in the last few weeks, and her victory was an outcome I expected.

Last week, Xavier Woods gave a great effort, but he was overwhelmed at the hands of RETRIBUTION’s T-BAR. But with Kofi still out with a broken jaw, Xavier Woods brought the full Power of Positivity against MACE.

Before the fight, Woods laid out Ali with a vicious punch. When the always threatening Retribution members started spreading out on all sides of the ring in the final moments of the fight, though, MACE used the confusion to lay out Xavier on the canvas for the definitive three-count. The match ended in nearly 5 minutes.

Match Review: 1/5. Xavier Woods is an excellent wrestler who should be allowed to shine in the ring alone. It was a typical retribution match with lots of distractions and confusion.

Before her match against Alexa Bliss, Raw Women’s Champion and one-half of the WWE Women’s Tag Team Champions, Asuka accepted her opponent’s request to step inside the creepy atmosphere, “Alexa’s Playground.”

Inside that puzzling domain, Alexa Bliss declared for the Royal Rumble Match. But when Alexa became distracted while talking to an empty swing, The Empress tried to comfort her. Asuka made a huge mistake, though, of talking about The Fiend. While responding, Bliss became suddenly enraged, and she immediately set the titleholder straight before returning to her eerie smile.

After declaring for the Royal Rumble Match last week, Mandy Rose and Dana Brooke’s dynamic duo was defeated by the powerful pair of Nia Jax & Shayna Baszler after “The Queen of Spades” tagged herself in to steal the pin from her ally.

Though Mandy was out to establish herself as a worthy competitor and needed payback against Shayna Baszler en route to the coming Royal Rumble Match, she was no match for her opponent’s Kirifuda Clutch.

After the match, the tension was high between Baszler and Nia Jax. After declaring for the Royal Rumble, The Queen of Spades had made it clear that it was every woman for herself, including when it comes to her and her tag-team partner. And as Nia and Shayna argued at ringside, Dana Brooke jumped onto both of them, sending them crashing into one another and the ring post. The match ended in four minutes.

Match Review: 1/5. It was a quick match that was all about the apparent tension between Nia Jax and Shayna Baszler. I am excited for the Royal Rumble, and I am sure Shayna will be one of the longest survivors in the Women’s Rumble match.

Sick of being neglected on Monday Night Raw, Ricochet renewed his rivalry with AJ as he looked to pick up a massive victory over The Phenomenal One and earn a chance to take part in the Royal Rumble Match. But despite Ricochet’s unbelievable efforts throughout the match, Styles emerged triumphant when he dropped his opponent on the ring ropes, caught him on the rebound, and presented an earth-shattering Styles Clash. The match ended in 15 minutes.

Match Review: 4/5. WOW! AJ Styles continues to impress, and I guess someone from WWE read my review where I’ve been continuously requesting the WWE to use RICOCHET in longer matches.

The Dirt Sheet welcomed Gillberg and the phony “Drew McIntyre.”

With the WWE Championship Match pitting Drew McIntyre against WWE Hall of Famer Goldberg set, the narcissistic duo of John Morrison and The Miz made it seem as if they would embrace Goldberg to a can’t-miss special edition of their talk show, “The Dirt Sheet.”

However, rather than the anticipated WWE Hall of Famer, Gillberg emerged to be interviewed, paving the way for The Shaman of Sexy and The A-Lister to mock the absent legend. As if that wasn’t enough, a fake “Drew McIntyre” from New Jersey soon entered the ring in full Scottish Attire, which only increased the joke. After Miz and Morrison had enough, they took it home by announcing that both McIntyre and Goldberg would lose at the next PPV, Royal Rumble, since he would finally cash in his Money in the Bank contract!

Later in the night, the real Drew McIntyre spoke to the WWE Universe from his home, quarantining with COVID, and he declared he would return on Raw next week!

The Hurt Business Vs. Riddle and The Lucha House Party

Last week, after a defeat at the hand of the “All-Mighty” United States Champion Bobby Lashley, Riddle shook The Hurt Business with an improvised challenge to take on MVP. Matt Riddle did not fare any better the second time around, as this one-on-one showdown resulted in another beat down at the hands of Lashley and MVP.

Tonight, “The Original Bro” teamed with Lince Dorado and the high-flying Gran Metalik in hopes to hurt The Hurt Business off their high horse by handing them a massive loss in Six-Man Tag Team action. There was noticeable dissension between Raw Tag Team Champions Cedric Alexander and Shelton Benjamin throughout the matchup. However, when Bobby Lashley had enough of it, he tagged himself, tearing apart The Lucha House Party before finishing Metalik with the full nelson. The match ended in 12 minutes.

Match Review: 3.25/5. It was a nice match with an excellent finish. Riddle didn’t take the pin because WWE is rightfully trying to protect him, so Metalik did the job. Bobby Lashley is impressive lately. I am not happy seeing the problems between Cedric and Shelton Benjamin. They won the Tag Team Title recently and should hold on to the gold for a longer duration.

Last week, Hardy lost to Ryker, Elias’ surprise last-second replacement in a programmed contest. After the fight, The Charismatic Enigma dared Elias to step in the ring and came out on top.

This week, Elias’s faithful follower promised to finish what he started and beat Jeff Hardy until he admitted to Elias’s universal truth. But when Hardy began to climb to the top rope to deliver a Swanton Bomb, Elias knocked him off the ropes and pushed the official to call for the bell. Ryker was sad at the disruption when, out of nowhere, Hardy hit Elias with a Hardy special dropkick through the ropes. When he came at Ryker again, the angry Superstar laid him by driving him hard into the ring. The match ended in three minutes.

Match Review: 1/5. It was a stupid finish to a promising battle between two of these superstars. WWE should book Jeff Hardy better. He is still promising as a wrestler, and longer matches would bring more viewers to Monday Night RAW.

Last week, Alexa Bliss interrupted Randy Orton’s matchup against Triple H and threw a fireball that blazed Randy Orton’s face. Then, she snapped again this week when Raw Women’s Champ, the ravishing Asuka dared to speak The Fiend’s name while lingering inside the “Alexa’s Playground.”

As a result, Alexa Bliss looked to punish The Empress of Tomorrow in Raw’s bizarre main event. But in a final moment of the fight, the lights suddenly randomly began to shut down, as Alexa Bliss looked up to the sky with a terrifying smile on her face. And when the lights came back, she had been totally transformed into a different, dangerous figure. As she moved methodically around the ring, she appeared able to resist all of Asuka’s offensive, almost swallowing it only to come back stronger each time. The spectacle weakened the Raw Women’s Champion, and the unusual incarnation of Alexa Bliss caught her in Sister Abigail with a frightening smirk and pinned the Raw Women’s Champ in a non-title match.

And, as the dust cleared, she once again remodeled into the Alexa Bliss the WWE Universe has come to know in recent weeks. Then, in the voice of The Friend, Alexa Bliss muttered: “LET ME IN!” The match ended in 12 minutes.

Match Review: 2.5/5. The main event was all about solidifying Alexa Bliss’s character. I look forward to what’s next in store for her. Am I a fan of ghostly character transformation? Maybe not! However, WWE has many young audiences who might enjoy the bizarreness of The Fiend and Alexa Bliss.