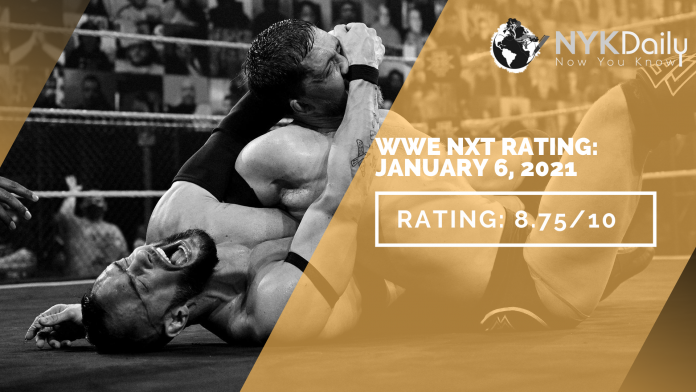 These two future champions locked horns with uncontrollable fury from the opening bell. Priest put Karrion on his heels like we haven’t seen, attacking the shoulders and arms of “The Doomsday Deviant.”

Meanwhile, Kross targeted Priest’s ribs with a vicious precision, but Priest dug deep to hit a Razor’s Edge and surprised the Capitol Wrestling Center when he hit a tope con hilo and top-rope spinning heel kick. But even that series of maneuvers and South of Heaven was not enough to put Kross away.

Kross countered Priest’s attempt at the Reckoning with an overhead toss and huge powerbomb before flattening him with a power slam on the steel steps. Priest defiantly continued to egg on Kross, and Kross obliged, hitting the Doomsday Saito and a massive forearm strike to remain undefeated in impressive fashion. The match went on for 15 minutes.

Match Review: 3.5/5. This was a takeover level match with two of hard-hitting wrestlers going all out inside the squared circle. I liked how Karrion won. It felt impressive and decisive.

It was another challenger, another conquest for Santos Escobar. Though Gran Metalik had Escobar shell-shocked early with a spectacular offense, Escobar blocked a hurricanrana attempt and slammed him into the barricade to take control.

Metalik rallied back behind more high-octane maneuvers, but he couldn’t defeat Escobar’s mastery of the squared circle. While Lince Dorado neutralized the rest of Legado del Fantasma at ringside, Escobar hung up Metalik on the ropes before planting him with the Phantom Driver to retain. The match ended in 12 minutes.

Match Review: 3.25/5. It was a decent match with some fantastic high-risk moves.

Xia Li looked like an absolute warrior in her return to NXT, arriving with Boa as well as the mysterious figure we saw presiding over their training in recent weeks. Katrina Cortez felt Li’s wrath as Li demonstrated a new look and new attitude, putting Cortez away after a strong step-up spinning kick. The match ended in under two minutes.

Match Review: 1/5. It was a short match that showed how dominant Xia Li really is inside the ring. It was a quick quash to give Xia momentum going forward.

Raquel González and Rhea Ripley may have put their issue to bed in a brutal fashion with a rivalry boiling for weeks. Ripley didn’t wait long to ratchet up the intensity, leveling “Big Mami Cool” with a Kendo stick early and handcuffing her to the barricade fencing at ringside.

But González showcased her unbridled power, ripping her hand free before slamming Ripley through the announce table and burying her in the wreckage, though it didn’t keep Ripley down. The nemeses battled to the backstage area, destroying their surroundings as The Nightmare smashed Raquel through a glass door. Ripley risked it all by ascending lockers for a senton to her foe through a table before Dakota Kai attacked Ripley with a Kendo stick. Ripley stuffed Kai in a locker and refocused her attention on González.

However, González stood tall, emerging from the ruins after smashing Ripley through the stage with a one-armed powerbomb, rendering her unable to answer the 10-count. The match went for under 20 minutes.

Match Review: 4/5. WOW, it was again a Takeover level match. The match was a wild brawl starting on the stage, later moving to the backstage area, and then finishing off the stage. Gonzalez is destined to become the next NXT women’s champion.

Johnny Gargano’s Curse Breaking Celebration didn’t exactly go according to plan. With no love lost for Candice LeRae, Shotzi Blackheart rolled her tank right into the ceremony, storming the ring to get her hands on The Poison Pixie. She also didn’t come alone, as Kushida provided backup, leading to an impromptu Mixed Tag Team Match as ordered by Dexter Lumis.

NXT’s resident Time Splitter scored a major pinfall on Gargano, catching the NXT North American Champion for the three-count on a roll-through.

The match ended in 10 minutes.

Match Review: 3.25/5. It was a nice match for the time given with a weak ending. Kushida is unofficially the number one contender for the NXT North American Title after this win.

After having his jaw broken in their previous meeting at NXT TakeOver 31, Finn Bálor sought to give Kyle O’Reilly a dose of his own medicine, having vowed to do even more damage this time. But just as The Prince almost immediately targeted O’Reilly’s jaw, The Undisputed ERA’s martial-arts master focused his attack on Bálor’s left arm as another unfathomably physical battle ensued.

The battle lines were reset after O’Reilly laid in a massive kick that downed Bálor and sent O’Reilly spilling out of the ring. Bálor continued to go after his opponent’s jaw and fought off a guillotine until O’Reilly transitioned expertly into a triangle. The Prince answered, applying a crossface that O’Reilly barely escaped.

With one last burst, O’Reilly hit a huge superplex and a brainbuster for a near-fall before going back to the mat with an armbar. With Bálor eventually breaking free, O’Reilly measured him in the corner for a potentially decisive blow, but the champion caught him in the midsection with a devastating strike. The Prince locked in an abdominal stretch-crossface combination, leaving O’Reilly with no recourse but to tap out. The match went for 20 minutes.

Match Review: 4.75/5. WOW! It was a fantastic main event. Finn Balor is money, and he belongs to NXT. Leave everything and watch this match if you are a wrestling fan. Kyle O’Reilly sold the jaw injury really well, and this match topped their previous Takeover encounter with some brutal moves from both wrestlers.