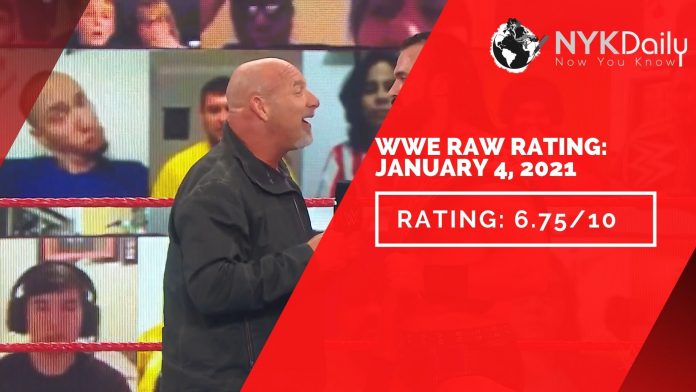 The Miz and John Morrison Vs. The New Day

After The New Day staged a takeover of “Miz TV,” Hall of Famer Teddy Long ceremoniously returned to grant a match between Kofi Kingston and Xavier Woods and The Miz and John Morrison. Kofi and Xavier were looking to hop back from lost titles, and The A-Lister was looking to rise again as Mr. Money in the Bank. Kofi got The New Day rolling with acrobatics over the ropes, but Miz and John Morrison dug into their bag of tricks to come back. Amidst a furious pace, Xavier found his footing and landed a Shiny Wizard on John Morrison to give The New Day a statement victory to open the first Raw of 2021. The match lasted around 13 minutes.

Match Review: 3.25/5. A boring pre-match promo was followed by a good match with a predictable end. I liked how Kofi comes back after a beatdown, and Xavier is good as ever. I want to see more of John Morrison in the ring, but WWE uses him to elevate others and understand why.

AJ Styles and Elias started their ‘boring’ rivalry after a tiring matchup last week, and the rivals came out throwing haymakers. Elias nearly ensured a win after a wicked knee to The Phenomenal One, but a Styles Clash presented the final note in the duo’s second showdown. The biggest fireworks came after the fight was over, as Jaxson Ryker attempted to smash a guitar but met Amos’ giant boot instead. The guitar shattered to smithereens as the colossus stared blades at the musical troupe. The match went on for around 9 minutes.

Match Review: 2/5. I am not fond of Elias Wrestling Style. AJ Style needs better opponents. WWE did the post-match angle to show how strong Amos is. AJ winning the match after a Style Clash is the best way to end this rivalry for good.

Lacey Evans and Peyton Royce continued to enhance their chemistry, but the new team had their hands full once again with Charlotte and Asuka. The Sassy Southern Belle did her best to try and charm Ric Flair at ringside throughout the fight, as Charlotte took exception to the advances. Royce fought bravely to stay alive in the match, but The Queen seemed poised to put the game away until “The Nature Boy” appeared to trip his girl to set Royce up for the pin. Following the surprising conclusion, The Dirtiest Player in the Game earned a smooch from Evans and a stern talking to Charlotte to stay out of her business. The match went for around 12 minutes.

Match Review: 2/5. It is 2021, and WWE is still trying to create a divide between Ric Flair and his daughter Charlotte Flair. It was a typical ‘champion loses a non-title match’ booking by the WWE, with Ric Flair providing the necessary distraction for the heels. I hated how the match ended, but WWE wants to protect Charlotte and Asuka, and it was maybe a clever try to elevate the team of Peyton Royce and Lacey Evans.

The clash between Bobby Lashley and Riddle began as an absolute slugfest with the United States Champion dishing out most early punishment. The All-Mighty paid homage to WWE Legend Ron Simmons with a Dominator in the middle of the ring, and then it seemed Riddle tapped out from a Hurt Lock. As MVP argued with the official, The Original Bro rolled up the unsuspecting Lashley for a win. The match lasted for around 11 minutes.

Match Review: 2.5/5 A good match with Lashley on the offense for 70% of it before getting screwed out of the win because the referee didn’t notice Riddle tapping out. This was another match where a champion lost a non-title match.

Dana Brooke and Mandy have shown they’ve been evolving as a team, and Shayna Baszler found out the hard way. After The Queen of Spades overwhelmed Mandy Rose on her walk to the ring, Dana Brooke slid in to step up to the hurdle against Baszler. Brooke reversed for a roll-up win, but Baszler quickly returned with a Kirifuda Clutch after the bell in hopes of dishing out more pain. Rose stood waiting in the wings and returned the favor to Baszler as the tandem stood tall in the ring. The match lasted a minute.

Match Review: 0.5/5. I am glad it was kept short. I am surprised to see Dana defeating Shayna Baszler, although it was done positively with Shayna rightfully coming out stronger.

Randy did all he could to live up to his Legend Killer character leading into the fight, and that didn’t stop when he entered the ring. The Viper struck early against Jeff Hardy, but The Charismatic Enigma met his opponent’s sadistic streak with undeterred courage. A Whisper in the Wind resulted in a near-fall, but Randy rallied to deliver the three most dangerous sports-entertainment letters (R K O outta nowhere) to put down another WWE Legend. The match lasted for 15 minutes.

Match Review: 3.5/5. I loved this match, although predictability hurt it a bit. Hardy did come close to win the match, but Orton kept the domination going. Randy winning with an RKO is not a surprise since he is the best heel in the company who should win clear against his opponents. Jeff Hardy did an excellent job as a veteran baby face.

Gran Metalik and Lince Dorado were looking to produce “Lucha Legends Night,” but The Hurt Business was out to bring more profits and shock to the red brand. Despite their talent, Cedric Alexander and Shelton Benjamin couldn’t stay on the same page even as Raw Tag Team Champions and Dorado capitalized. The high-flyer Superkicked Benjamin and pulled off an acrobatic takedown. Lucha House Party went wild in victory, as MVP went off the handle in a storm after a rough night for The Hurt Business. The match lasted for 4 minutes.

The two heavyweights came out firing haymakers, as Drew and Lee went to war on Raw Legends Night. Keith Lee announced his intentions, as a running shoulder sent Drew McIntyre flying over the barricade and nearly out of the WWE Thunderdome completely. The fighting champ came charging back and put his strength on display with a great toss of Keith Lee across the ring. With WWE Legends watching in wonder, Keith Lee nearly entered sports-entertainment lore with an earth-shattering Spanish Fly off the top rope. Fighting through injured ribs, Drew McIntyre reversed a Spirit Bomb at the last second and connected on a Claymore to win the WWE Championship match in a classic bout. The WWE Champion’s night wasn’t over just yet, as returning GOLDBERG entered the ring and laid down a Royal Rumble challenge for Drew McIntyre.

The match went on for 21 minutes.

Match Review: 4.5/5. It is the best match of 2021 until now. It felt like a PPV main event, with both the wrestlers having plenty of time to tell the story. Keith Lee showed why he belongs to the main event scene while Drew McIntyre proved his in-ring abilities against a more formidable opponent. The highlight of the match was Keith Lee delivering a vicious Spanish Fly slam off the top rope. The returning Goldberg was a nice surprise. Do I want to see Goldberg Face Drew McIntyre at the Royal Rumble? Nope. Goldberg should retire and let the younger generation take over the squared circle.

Three Stars of the show