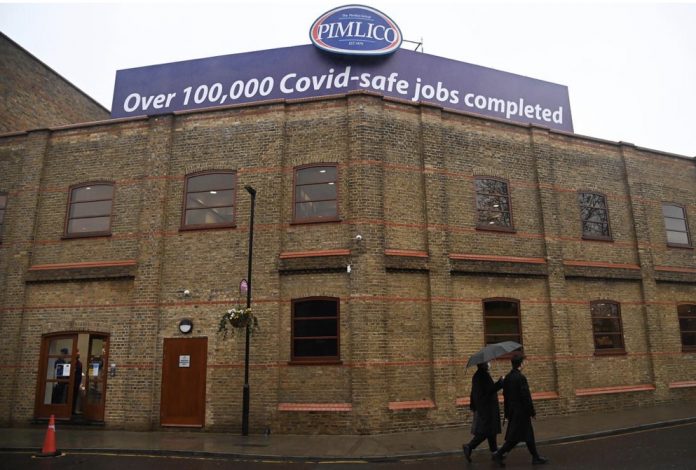 A firm of London plumbers is looking at changing its employment contracts to include a requirement for workers to have a COVID-19 vaccine, its founder said on Thursday, though he added that no one would get fired for refusing to have the shot. People walk past the headquarters of Pimlico Plumbers, who have stated that they will require new hires to be vaccinated against COVID-19, as the spread of the coronavirus disease (COVID-19) continues, in London, Britain January 14, 2021.

Pimlico Plumbers, with a workforce of more than 400, has been talking to its lawyers about making the vaccine mandatory for new hires within a few months, founder Charlie Mullins said.

The firm was also exploring how it might modify existing staff contracts, he said, although he insisted no one would be forced to receive a vaccine or be fired over the issue.

“We wouldn’t dream of forcing anybody but I’m pretty much certain that 99% of our staff would jump at the opportunity,” Mullins told Reuters in a telephone interview.

“Who in their right mind would turn down one needle or one jab that could save your life?” he added.

Asked whether there was a contradiction between saying contracts could be modified to require vaccines while also saying no one would be forced out, Mullins presented the issue as one of persuasion rather than coercion.

“It’s not a contradiction because I think you’ll find if you encourage people and advise them … I’m happy to pay for anyone that works for us to have the vaccine,” he said, adding that this could take place during working hours.

As things stand, people in Britain can only receive the vaccine from the state-run National Health Service, which is gradually rolling them out free of charge, following an order of priority with elderly and vulnerable people top of the list.

Mullins said he believed that within a few months it should be possible to pay to obtain vaccines privately, and he also thought it would become the norm for proof of vaccination to be required for things such as air travel or going to the theatre.

In that context, he said, he did not believe many people would find a “no jab, no job” policy controversial.

“Nobody moans now you’ve got to get on a plane with a negative COVID test,” he said, referring to a new requirement for passengers arriving in Britain to provide proof of a negative test taken less than 72 hours before travel. Many other countries have had such requirements for months.