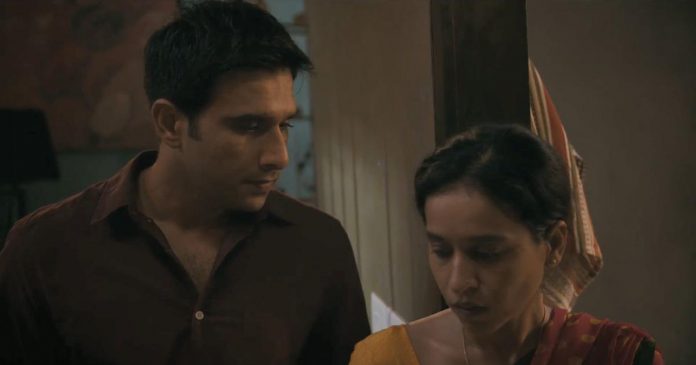 I watched the trailer last year and since then I was waiting for the film. Last weekend it was available on Netflix!

Though I should start by saying that all the films with the word ‘Sir’ in their title are brilliant; be it the 1967 British drama ‘To Sir, with Love’ that deals with the social and racial issues in the slums of London’s East End or be it the 1993 Indian romance ‘Sir’ that tells a tale of affection between a teacher and his female student who he decides to help with her stammering. Both the films are tender and so is ‘Is Love Enough? Sir’.

A beautifully ordinary yet delicate romance between an affluent architect and his female servant, ‘Is Love Enough? Sir’ is a film that everyone who appreciates thoughtful stories should watch!

A man and a woman from completely different social-cultural-economic backgrounds; two people who belong to two different worlds, two completely unequal classes! He is an America-returned, established architect. She is a widow from a nearby village who aspires to be a fashion designer. He is a heartbroken, hopeless, gorgeous man. She is a vibrant, ambitious, plain woman. He is lost. She takes charge of her life. He is humble. She is dauntless. He sleeps in a comfortably designed room. She manages her belongings inside a balcony-sized room just behind the kitchen. His is a posh balcony of a multi-storeyed skyline. She waits outside a common bathroom at Mumbai chawls!

But they are equal in their passion for their work, awareness of their thoughts and feelings, understanding of relationships, and moral respect for fellow humans, nature, and life. They are alike in trusting in a fairy tale and not trusting in it.

She doesn’t know the meaning of the word ‘brave’, but she knows when he wishes to avoid a phone call. He knows nothing about her chores, but he willingly supports her struggles to learn tailoring. She cooks his favourite mutton, despite being a vegetarian herself. He brings fashion magazines for her to read. She stitches a colourful shirt for him on his birthday. He wears it to work. She inspires him to finish his ‘half-novel’ (she tells him, ‘Sir par agar likhna hai to aap kahin se bhi likh sakte hain na?!’). He buys a sewing machine for her! They communicate in silence, in the least, in short sentences and yet they understand each other like the prayer told to the good Lord! Their glimpses into each other’s ‘secret selves’ allow them to communicate without saying a word! Their intense intimacy is much more sincere than just a gimmick.

The film also touches crude snobbery in upper-class circles and unjust oppression of the lower-class maids while observing prejudices of which both upper and lower classes are victims. Not only the spoilt, flamboyant people threaten to deduct thousands from salaries of lower-class people (or even slap them), the poorer staff talks about their employer’s love affairs and broken marriages behind their back.

Every frame in the film is innate and each emotion is effortless. Personally, I felt as if I am reading a novel by Indian writer Premchand, for the storyline of ‘Is Love Enough? Sir’ portrays complex human emotions as beautifully as the plots of Nirmala and Godan do. Like characters from his novels, Ratna and Ashwin are good and decent, loved for their high-minded overtones in the film. Premchand’s women characters voice strong arguments, criticisms, and feelings. Ratna is eloquent and expresses herself generously. Premchand writes about untouchability, social and class inequalities, issues of widow remarriage, widespread system of dowry, and pain and suffering of the labour class. Rohena Gera’s female protagonist is married to an older, ill man at a young age because her parents couldn’t afford dowry. She is not allowed to wear bangles in village. She is insulted by her employer’s friends when she accidentally drops wine on their dress. She is ignored by high-profile guests at her madam’s party and is made to sit on the floor and eat after every guest has had their meals and left. Like Premchand, Rohena Gera makes general observations. Like his stories, this story of hers is moralistically didactic.

Or, it seems as if this is the modern-day Indian Cinderella story with the protagonist not finding her prince in the real world, despite being as nice and kind and spirited as the Ella of the fairy tale! It also reminded me of films like The Age of Innocence (1993) or Sleepless in Seattle (1993) or Arth (192) where the silence spoke the wordless language of love, where love tasted as gratifying as a sip of morning tea. In Indian cinema of 2000s, only Tum Bin (2001) could make one feel this way!

Does Ashwin fall in love with Ratna because he is lonely after his wedding is called off, because she is homely and cares for him selflessly, and because he has had his flings with pampered princesses?

I guess no. He is in love with her because she inspires him with her honest conversations (she tells him, ‘Life khatam ni hoti hai, Sir!’) and because she is original, someone who sees the world from her own space on the terrace and tries to listen to everyone’s heart’s desires (mannatein). He finds several opportunities to connect with rather urban women who run their own production houses, but in the end falls for her naïve charm.

Does Ratna fall in love with Ashwin because he is a handsome, eligible bachelor with whom she is effectively living together after her husband died when she was 19?

She loves him because he respects her freedom and apologises to her on behalf of every guest who insults her (he even stands up to his friends when they insult her), because he listens to her stories and encourages her to follow her indomitable dream, and because he is a sensitive man who doesn’t hide his sentiments.

Will we ever dare to tell a story that cruises beyond economic inequality, like Lady Sybill Crawley marrying Tom Branson, their chauffeur in Downtown Abbey or like the prince announcing a daughter of an inventor, Belle, to be his queen in Beauty and the Beast!?

There have been interracial romances like Mowgli (1994) or Corrina Corrina (1994) or Addicted (2014) or English Vinglish (2012). Inter religion films like Kedarnath (2018) or Bombay (1995) or La petite Jérusalem (2005) is a common subject. We do in fact have several stories where the masters romance their slaves/servants or strangers, like Arthur (1981) in which a rich man falls for poor sales-woman or Girl with a Pearl Earring (2003) in which a famous painter is infatuated with a young peasant maid. We have Khoobsurat (1999) where the daughter of a rich man, Shivani, falls in love with a thief, Sanju. Elizabeth (1998) secretly romances an English statesman Lord Robert Dudley and Jaba marries her father’s overseer Atulya Chakraborty “Bhoothnath” in Sahib Bibi Aur Ghulam (1962). But we hardly have any films where the relationship between masters and slaves are accepted by the society; even in Mughal-e-Azam (1960) Anarkali is ordered to live in obscurity and Salim is not to know about it. Perhaps, because we realise class divide is deeply rooted and it will take years to eliminate the basis of it. Don’t know how many!

‘Is Love Enough? Sir’ is a deep devotion, deeply fulfilling love that makes the audience’s heart desires for transcendental pleasure in the midst of chaos. It makes you cry when Ratna calls his name ‘Ashwin’ in the end, because he keeps asking her, ‘Tum mujhe kab tak Sir bulaogi?!’

Rohena Gera, this is a gorgeous debut. Tilotama Shome and Vivek Gomber, you were lovely, ethereal.