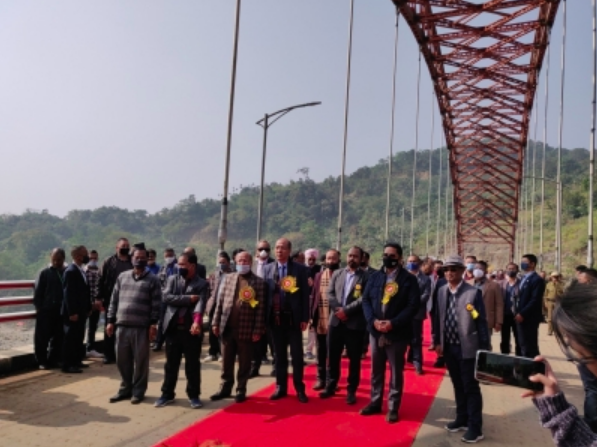 In a big boost to tourism and trade with Bangladesh, Meghalaya Chief Minister Conrad K. Sangma on Friday formally opened the longest steel arch bridge in the country on the Wahrew river in the states southern region.

According to the officials, the bridge measuring 169.350 metres connecting Bholaganj and Sohbar with Nongiri in East Khasi Hills bordering Bangladesh has been constructed at a cost of Rs 49.395 crore.

An official said that the funds for the bridge were sanctioned from the Non-Lapsable Central Pool of Resources of the Union Ministry of Development of North Eastern Region (DoNER).

Inaugurating the bridge, the Chief Minister said: “This is India’s longest steel arch bridge. It was a long-cherished dream of the people of Meghalaya and the people of East Khasi Hills to have this bridge connecting Bholaganj and Sohbar with Nongiri over river Wahrew.”

He said the bridge would help boost tourism and economic activities in the state along its borders.

The bridge would facilitate trade with Bangladesh as the connecting road is linked to the Bholaganj Land Custom Station apart from being the main surface link along the Bangladesh border from a strategic point of view.

“We dedicate this bridge to the progress of the area and Donkupar Roy (former Meghalaya Chief Minister),” Sangma said.