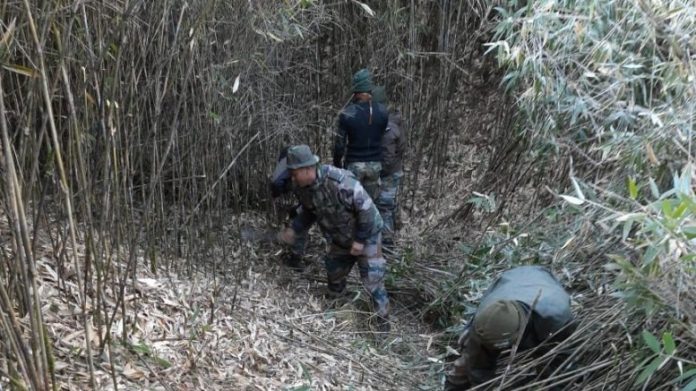 The 12-day long wildfire in the famous Dzukou Valley on Nagaland-Manipur borders is “almost controlled” as no fresh fire or smoke was visible on Saturday, officials said.

Kohima District Deputy Commissioner Mohammed Ali Shihad A said that the fire fighters, including the Indian Air Force and National Disaster Response Force (NDRF), would continue their operation on Sunday.

Quoting the forest and disaster management officials, he said that during the inspection from the IAF choppers, it was observed that no fresh fire or fresh smoke was visible while a very low intensity smoke was seen which was doused by Bambi bucket operation.

“Superintendent of police of Kohima district Manoj Kumar informed that the ground operation team reported that smoke from across the mountain started appearing on Saturday morning. The smoke was doused by one sortie of Bambi bucket operation. No active smoke or fire was reported by the ground team from the watchtower till the time of reporting,” the DC said.

Defence spokesman Lt. Col P. Khongsai said that in the ongoing effort to douse the wildfire in the popular tourist destination on Nagaland-Manipur border, Spear Corps (of Army) and Assam Rifles is working hand in hand with various central and state governments organisations, tackling the problem in a synchronised manner.

He said that the Army is also providing its aviation base for the launch of Bambi bucket operations and coordinating ground support, air traffic control, air space management as well as other logistics support to the IAF.

An IAF release said that operating in the northern part across Dzukou River, the teams have been successful in dousing the fire in a large area and are creating fire lanes to avert further spread.

He said that responding to Nagaland government’s requisition, the IAF had started uninterrupted operations since January 1.

A large number of volunteers and locals are helping the NDRF, IAF and Army personnel to douse the wildfire.

The wildfire broke out in the Dzukou Valley under Kohima district in southern Nagaland on December 29 and crossed over to the northern Manipur side forcing both the state governments to request the NDRF and the army to help contain the wildfire.

According to the officials, the inferno has destroyed much of the forest, seasonal flowers, flora and fauna and harmed the rich biodiversity of the valley, which is also a famous trekking site.

One of the 10 most beautiful places in the mountainous northeast India, the Dzukou valley, 30 km from Kohima, is also a sanctuary for the endangered Blyth’s tragopan – Nagaland’s state bird – and other species of birds and animals.

The iconic valley, situated at an altitude of 2,452 metres above the sea level, is a popular tourist spot and also famous for its seasonal flowers and biodiversity.

Often caught in a boundary dispute between Manipur and Nagaland, it has been prone to wildfires.

Members of the Southern Angami Youth Organisation (SAYO), which runs an adventure-based conservation programme, tackled such fires in many instances earlier. In 2006, the wildfire affected a 20-km stretch in the southern part of the valley.