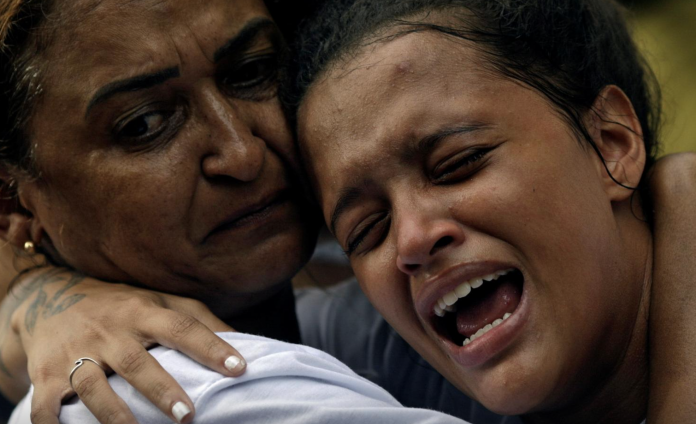 Crowds gathered on Tuesday in a Rio de Janeiro cemetery to bury Marcelo Guimarães, the latest victim to be killed by police in Brazil, home to some of the world’s deadliest security forces.

Guimarães was killed on Monday at the entrance to the City of God favela, after dropping off his son for his first day of school. His family said Rio’s military police, known for their deadly raids on poor, Black neighborhoods, shot him from inside an armored vehicle as he drove past on a motorcycle.

Police violence is a long-running problem in Brazil, and particularly in Rio, home to some 17 million people. State security officers killed 1,160 people between January and November 2020, about the same number as in the whole of the United States.

Critics accuse far-right President Jair Bolsonaro, who has for years lived in Rio, of exacerbating the issue by urging police to show no mercy to criminals he has labeled “cockroaches.”

Speaking to reporters after the burial, Guimarães’ daughter, Vitoria, accused the officers of murdering her father.

“They are the bandits, the corrupt ones,” she said. “The government kills poor people, Black people, favela-dwellers and workers. My father was honest. They aren’t.”

In a statement, Rio state’s military police said Guimarães was caught in crossfire during a shootout.

“At the time of the action, a motorcyclist passing by was hit. Unfortunately, the victim did not survive the injuries,” it said.

The police added that security had deteriorated in the area recently, and its officers had been shot at. The death is under investigation, police said.