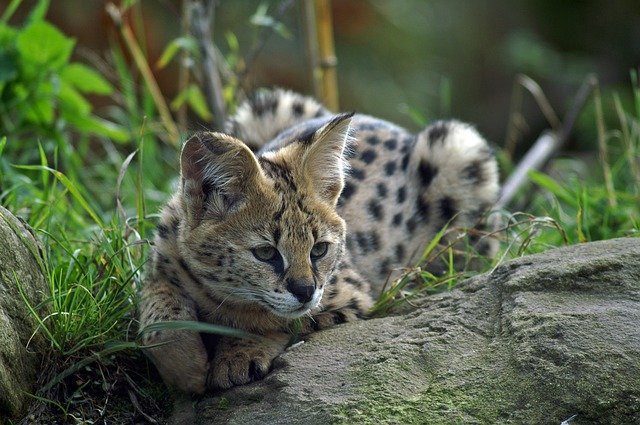 Serval is a highly thriving feline and a hunter. Its beautiful coat and extraordinary predatory abilities enable it to stand out among other top predators of the African twilight. Requiring water frequently for its survival, it lives in open plains and grasslands with water patches, avoiding arid and desert areas. Extinct from North Africa owing to human intrusion, they are now only seen in sub-Saharan Africa.

Serval coat is normally tawny with some black spots on it, sometimes fusing to form stripes. Melanism is seldom seen, along with white Servals, though the latter is only found in zoos (captivity). Serval’s distinct features include its’ long legs, longer in proportion to body size than any other wild cat, and long ears, providing it with a hearing ability unmatched in cat family that make the Serval a master hunter. Despite being a medium-sized cat – nearly forty pounds in weight, around four feet, including tail in length – Serval can often take down larger prey.

Owing to its extremely specialized physique, Serval is among the best hunters in all of Africa, boasting an incredible success rate of 45% in hunting. It takes a huge variety of prey, including birds, rodents, hares, fish, frogs, and insects. The usual approach is to quietly stalk the target in the night, echo-locating it with its pointed ears, then making a final vertical jump on the animal. Serval is also capable of catching birds out of the air by bouncing high from the ground and carefully making a clapping movement from its dangerous paws to catch the poor bird out of thin air. At times Serval even takes down large deers, though the chief victim animals remain smaller mammals.

Servals are solitary cats and come together only during mating. Pregnancy lasts around three months, after which one to five, usually two cubs are born. Mother hides the young in dens and bush until they gain freedom at seven months and attain maturity at nearly a couple of years of age. In captivity, Servals can live up to nineteen years.

A significant threat to the Serval’s survival includes the degradation of grasslands and wetlands. Though on the decline, serval skins’ trade still occurs in countries such as Senegal and Benin. In West Africa, the Serval has substance in traditional medicine. Pastoralists often murder servals to defend their livestock, though servals normally do not prey on livestock.