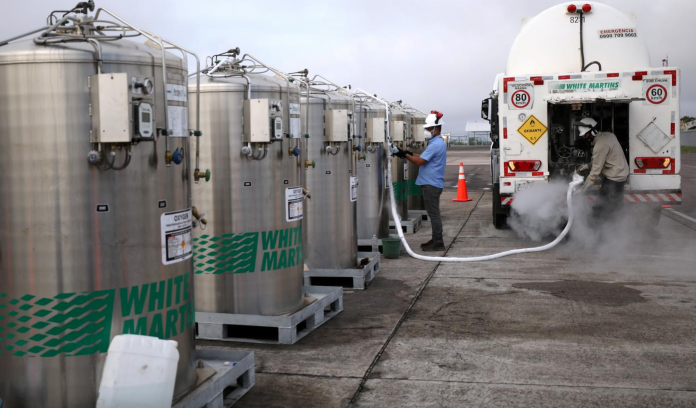 Brazil’s Air Force flew emergency oxygen supplies on Friday to the jungle state of Amazonas devastated by a resurgent pandemic and the government scrambled to organize nationwide vaccinations while President Jair Bolsonaro said he “should be at the beach.”

Doctors in Amazonas were using their own vehicles to transport patients, as locals sought to buy oxygen tanks on the black market, according to media reports. Desperate relatives, protesting outside hospitals in the state capital of Manaus, said patients had been taken off ventilators as oxygen ran out.

Health authorities there said oxygen supplies had run out at some hospitals and intensive care wards were so full that scores of patients were being airlifted to other states. Doctors reported sharing oxygen between patients, alternating every 10 minutes.

The Air Force flew cylinders with 9,300 kilograms of oxygen in from Sao Paulo state with another cargo expected on Friday. It said a flight carried nine patients from Manaus to Teresina in northeastern Brazil, and evacuations will continue with two planes taking patients to six cities.

Officials had planned to airlift 61 premature babies in incubators out of Manaus, but the relocation ultimately was not needed because emergency oxygen supplies were procured.

The World Health Organization said ICU occupancy has been 100% full for two weeks in Manaus, causing shortages of oxygen and also of gloves and protective equipment for medical and laboratory staff, many of whom have been infected.

“This a situation where your whole system begins to implode,” Mike Ryan, WHO’s top emergency expert, told a press conference in Geneva.

Brazilians protested against the right-wing president’s handling of the health crisis on Friday night. Residents of the country’s largest cities banged on pots and pans from their windows, many shouting “Out with Bolsonaro” and some crying “genocide.” The protest on social media was labeled #Brazilsuffocated.

Pot-banging protests were a hallmark of the early days of the pandemic by people critical of Bolsonaro’s tepid response.

A government plan to start inoculating Brazilians against COVID-19 early next week was in disarray. Bolsonaro said a plane standing by since Friday to pick up 2 million doses of an AstraZeneca vaccine from India’s Serum Institute would now depart in “two or three days.”

Brazil’s Health Ministry requested immediate delivery of 6 million doses of the COVID-19 vaccine developed by China’s Sinovac and imported by Sao Paulo state’s Butantan biomedical center, saying it needed them for its planned launch of immunizations next week.

“I SHOULD BE AT THE BEACH”

Health regulator Anvisa was set to decide on authorizing emergency use of Sinovac’s Coronavac as well as the AstraZeneca vaccine on Sunday.

Bolsonaro, who has denied the gravity of COVID-19 and has stated he will not be vaccinated, said in a television interview there was little he could do about the pandemic as a second wave of the new coronavirus tore through the country.

“I should be at the beach right now,” he said on Band TV, adding that his health minister was doing an “exceptional job.”

Critics of the president said the grim situation in Manaus was just the latest example of his poor handling of the pandemic. Brazil has the world’s second highest COVID-19 death toll after the United States.

Brazil is now dealing with a snowballing second wave and a new, potentially more contagious, coronavirus variant that originated in Amazonas and prompted Britain on Thursday to bar entry to Brazilians.

Bolsonaro, a former army captain who has opposed lockdowns to halt the pandemic’s spread, said the government had already done what it could in Manaus.

The hoped-for 2 million AstraZeneca doses from the Serum Institute now face delays while India decides whether to loosen export regulations as it begins its own inoculation drive this weekend, a source briefed on the matter said.

India, which is starting the world’s largest vaccination campaign on Saturday, should decide on whether to export vaccines within the next few weeks, Foreign Minister Subrahmanyam Jaishankar told Reuters this week.

The worldwide coronavirus death toll surpassed 2 million on Friday, according to a Reuters tally.