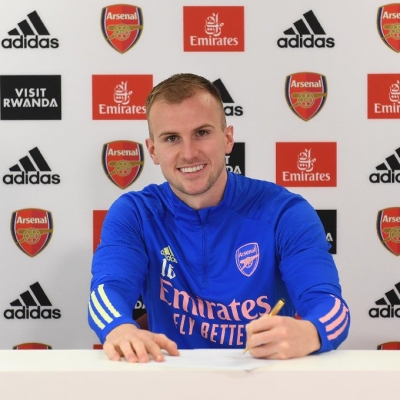 Defender Rob Holding has signed a new long-term contract with Arsenal, which will see him at the club until 2024 with an option for a further year.

Since joining the club from Bolton Wanderers in July 2016, the centre-back has made 96 first-team appearances, winning two FA Cups along the way. The highlight of Rob’s first season was a superb performance in the 2017 FA Cup final, with his commanding display alongside Per Mertesacker ensuring Arsenal won the trophy with a 2-1 win over Chelsea.

Head coach Mikel Arteta said: “Since I started as manager, I have been hugely impressed with Rob’s contribution to the club and the dressing room, on and off the pitch. The quality of his work every day on the training pitches is excellent and he is translating this into consistently high performances in matches.

“We all know Rob’s quality, which he has shown in his displays during the intense moments of those two FA Cup final victories. We are all very happy that Rob has signed a new contract, he is very popular with all the players and staff, and we’re looking forward to watching him continue to grow with us in the coming years,” he added.

Holding has made a memorable return from the knee injury he sustained at Old Trafford two years ago. He was a key part of our Emirates FA Cup victory last season, missing just one match in Arsenal’s run to the final and playing the whole 90 minutes in the Wembley win over Chelsea. He has continued that form and has already made 16 starts this season.