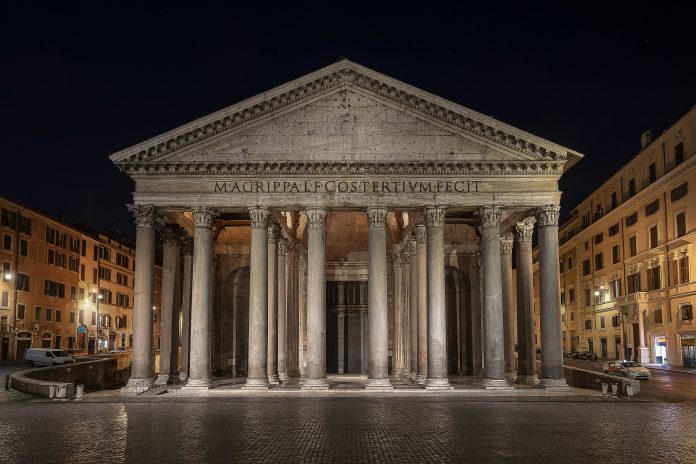 The Pantheon is a former Roman temple, now a Catholic church, in Rome in Modern Day Italy, on the site of an earlier temple commissioned by Marcus Agrippa during Augustus’s reign (27 BCE – 14 CE). It was restored by the emperor Hadrian and presumably dated about 126 AD. Its construction date is unknown because Hadrian chose not to record the new temple but rather to preserve Agrippa’s older temple’s inscription, which had sadly burned down.

After the Battle of Actium in31 BCE, Marcus Agrippa began an intense building program: the Pantheon was a part of the network created by him on his property located in the Campus Martius in 29–19 BCE, which involved three buildings arranged from south to north: the Baths of the great Agrippa, the Basilica of Neptune, and the Pantheon. It seems likely that the Basilica of Neptune and Pantheon were Agrippa’s public temples (sacra privata, not aedes publicae).

The former would help illustrate how the building could have so easily lost its original purpose and name in such a relatively short period.

Historians had long thought that the prevailing building was constructed by Agrippa, with later modifications, and this was in part because of the Latin inscription on the front of the temple, which reads:

The Pantheon dome. The coffered dome has a central oculus as the primary natural light source. M·AGRIPPA·L·F·COS·TERTIVM·FECIT or in full, “M[arcus] Agrippa L[ucii] f[ilius] co[n]s[ul] tertium fecit,” meaning “Marcus Agrippa, son of Lucius, made [this structure] when consul for the 3rd time.”

However, archaeological excavations have revealed that the Pantheon of Agrippa had been totally destroyed except for the façade. Lise Hetland claims that the existing construction began in 114, under Trajan, four years after it was damaged by fire for the second time (Oros. 7.12). She reviewed Herbert Bloch’s 1959 paper, which is accountable for the commonly maintained Hadrianic date, and claims that he should not have excluded all of the Trajanic-era bricks from his brick-stamp study. Her argument is fascinating in light of Heilmeyer’s controversy that, based on stylistic evidence, Apollodorus of Damascus, Trajan’s architect, was the apparent architect.

The form of Agrippa’s Pantheon is disputed. As a result of excavations in the late 19th century, archaeologist Rodolfo Lanciani settled that Agrippa’s Pantheon was turned so that it faced south, in contrast with the contemporary layout that faces north, and that it had a shortened T-shaped plan with the entrance at the base of the “T”. Historians widely accepted this description until the late 20th century. While more recent archaeological diggings have suggested that Agrippa’s building might have had a circular form with a triangular porch, and it might have also faced north, much like the later rebuildings, Ziolkowski complains that their conclusions were based entirely on surmise; according to him, they did not find any new datable material, yet they connected everything they found to the Agrippan phase, failing to account for the fact that Domitian, known for his enthusiasm for construction and known to have restored the Pantheon after 80 AD, might well have been responsible for everything they found.

Ziolkowski argues that all of the finds still support Lanciani’s initial assessment to date, including theirs; furthermore, he expresses skepticism because the building they describe, “a single building composed of a huge pronaos and a circular cella of the same diameter, linked by a relatively narrow and concise passage (much thinner than the current intermediate block), has no known parallels in classical architecture and would go against everything we know of Roman design principles in general and of Augustan architecture in particular.”

The only passages referring to the Agrippan Pantheon’s decoration written by an eyewitness are in Pliny the Elder’s Natural History. From him we know that “the capitals, too, of the pillars, which were placed by M. Agrippa in the Pantheon, are made of Syracusan bronze”, that “Diogenes of Athens has decorated the Pantheon of Agrippa, and the Caryatides, by him, which form the columns of that temple, are looked upon as masterpieces of excellence: the same, too, with the statues that are placed upon the roof,” and that one of Cleopatra’s pearls was cut in half so that each half “might serve as pendants for the ears of Venus, in the Pantheon at Rome.”

The Augustan Pantheon was destroyed along with other buildings in a huge fire in the year 80 AD. Domitian rebuilt the Pantheon, which was burnt again in 110 AD.

The degree to which the decorative scheme should be credited to Hadrian’s architects is uncertain. Finished by Hadrian but not claimed as one of his works, it used the text of the original inscription on the new façade (a common practice in Hadrian’s rebuilding projects all over Rome; the only building on which Hadrian put his own name was the temple to the Deified Trajan).

How the construction was used is not known. The Historia Augusta confirms that Hadrian devoted the Pantheon (among other structures) in the name of the original builder (Hadr. 19.10), but the present inscription could not be a copy of the original; it provides no knowledge as to who Agrippa’s foundation was dedicated to, and, in Ziolkowski’s opinion, it was doubtful that in 25 BC Agrippa would have given himself as “consul tertium.” On coins, the same words, “M. Agrippa L.f cos. tertium”, were the ones used to refer to him after his death; consul tertium toiling as “a sort of posthumous cognomen ex virtute, a remembrance of the fact that, of all the men of his age apart from Augustus himself, he was the only one to hold the consulship thrice.”

Whatever the cause of the inscription’s alteration might have been, the new inscription reflects the fact that there was a change in the construction’s purpose.