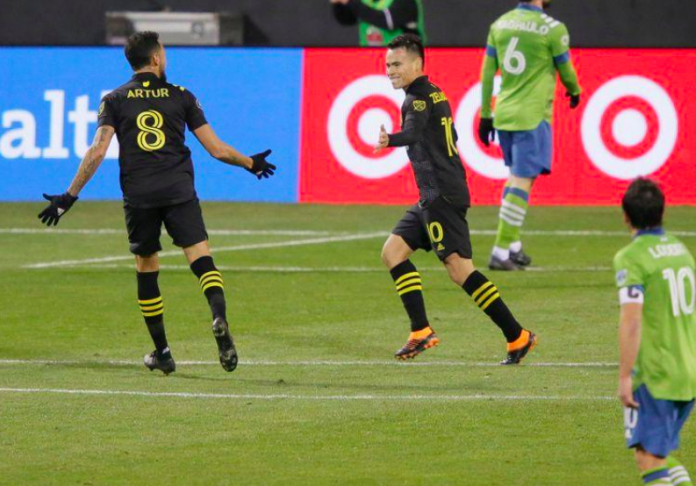 Argentine midfielder Lucas Zelarayan scored in both halves to help Columbus Crew seal their second MLS Cup title with a 3-0 victory over defending champions Seattle Sounders at the Mapfre Stadium on Saturday.

The 1,500 fans in attendance were treated to a breathtaking display of attacking soccer from the hosts, who took the lead in the 25th minute when Seattle keeper Stefan Frei failed to keep out Zelarayan’s sweetly struck volley.

Zelarayan turned provider for the second, bringing the ball down on the edge of the box and finding Derrick Etienne Jr., who unleashed a curling effort past Frei into the far corner.

Seattle had mounted a spectacular comeback from two goals down in the Western Conference Final against Minnesota but there were no similar heroics on Saturday as Zelarayan netted his second in the 82nd minute after neat wing play from Luis Diaz.

Caleb Porter’s side had not conceded a goal in their last 210 minutes of playoff action heading into the final and once again held firm in face of a late Seattle onslaught to become the seventh team to win multiple MLS Cups following their triumph in 2008.

“I’m over the moon. We wanted this from day one and we finally got it,” Columbus midfielder Gyasi Zardes said.

Defender Jonathan Mensah dedicated the victory to the home fans, saying: “A huge thank you to our fans. We are so grateful for their support and their love.”

Seattle failed to add to their championships of 2016 and 2019 but coach Brian Schmetzer said he was proud of his side’s efforts this season.

“I just want to congratulate Caleb and Columbus. That was a very good performance,” Schmetzer said. “I’m very proud of the season, not the last game, but the season that my squad put together.

“They worked hard. They fought until the end, but they came up short tonight. In the long run in the bigger picture, I think there’s certainly a lot of success that follows this franchise and we hope to continue that.”