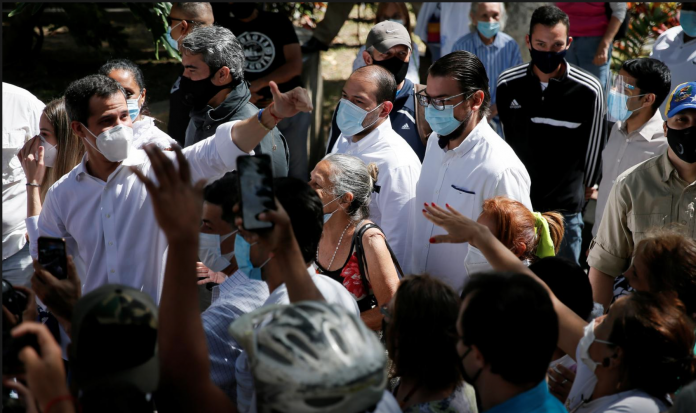 The consultation started virtually on Monday and ended with in-person participation. With 87% of responses reviewed, the opposition said just under 6.5 million people participated. Of those, over 3 million voted in person, and 2.4 million online. Close to 845,000 Venezuelans abroad took part, the opposition reported.

The effort was aimed at helping the opposition demonstrate a broad rejection of Maduro, but it does not offer a clear path toward a change of government.

The legislative elections returned Maduro’s allies to congress despite an economy in ruins, aggressive U.S. sanctions that stifle the OPEC nation’s oil exports and the migration of some 5 million citizens. The Maduro government said 5.2 million Venezuelans voted in the election.

Congress was the last state institution not in the hands of the ruling Socialist Party.

The idea of a popular consultation was proposed in August by Guaido, who is recognized by dozens of countries as Venezuela’s legitimate president following Maduro’s disputed 2018 re-election.

Opposition leaders and most Western nations said the election was stacked in favor of Maduro, who has been widely criticized for his human rights record and for undermining democracy to stay in power.

Blanca Marmol, a former supreme court magistrate who helped organize the popular consultation, told a news conference, “This is, I want to emphasize, the last resource we have in the constitution.”

Organizers on Saturday reported incidents in 11 of Venezuela’s 24 states, with police and ruling party supporters removing some opposition sites for the informal vote.

Marco Blanco, a 54-year-old taxi driver in the western Caracas neighborhood of Catia, said he was unaware of the vote.

“I heard something about a query, I don’t know what it is for,” he said. “I have listened, but very vague. Almost nothing.”