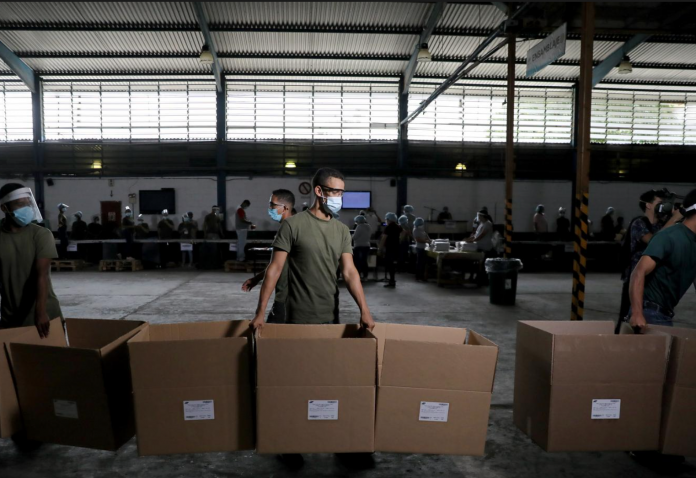 Venezuelans on Sunday choose a new congress in an election that the opposition is boycotting and most Western nations call a fraud by President Nicolas Maduro to retake the last state institution not in the hands of the ruling Socialist Party.

The vote is almost certain to return congress to Maduro’s allies despite his government struggling with an economy in ruins, aggressive U.S. sanctions that stifle the OPEC nation’s oil exports, and the migration of some 5 million citizens.

Members of the new congress will have few tools to improve the lives of Venezuelans whose monthly salaries rarely cover the cost of a day’s groceries, nor will their election improve Maduro’s reputation among Western nations for mismanagement and undermining of human rights.

It could, however, provide legitimacy for Maduro to offer investment deals to the few companies around the world willing to risk running afoul of Washington’s sanctions for access to the world’s largest oil reserves.

Many Venezuelans struggling with basic needs such as electricity, security and food express weariness with the country’s politicians, who they say have done nothing to stem the slide in living conditions.

The election closes a cycle that began in 2015 when a euphoric opposition celebrated winning congress by a landslide, only to see their legislative powers swept aside by pro-government courts and the creation in 2017 of an all-powerful body known as the National Constituent Assembly.

Opposition leader Juan Guaido, head of the current congress, is calling on Venezuelans to skip the vote and participate in a Dec. 12 consultation that will ask citizens if they reject Sunday’s vote and whether they want a change of government.

Guaido has been recognized by more than 50 countries including the United States as Venezuela’s legitimate interim president, after most Western nations disavowed Maduro’s 2018 re-election as fraudulent.

Those countries are expected to continue their recognition of Guaido, though the opposition is discussing proposals that could limit the size of his interim government and reduce the number of ambassadors.

The legislature on Saturday approved a resolution condemning Sunday’s “event” as fraudulent and unconstitutional, adding it “violates Venezuelans’ right to hold free, transparent and fair elections.”

Despite U.S. President Donald Trump’s campaign of sanctions and diplomatic pressure, Maduro has remained in power, backed by the military and supported by Russia, Cuba, China and Iran.

The top U.S. envoy on Venezuela, Elliott Abrams, told Reuters in an interview on Thursday that there was strong bipartisan consensus in Washington over the need to keep pressure on Maduro, and that he did not expect major changes to U.S. policy when Joe Biden takes office on Jan. 20.