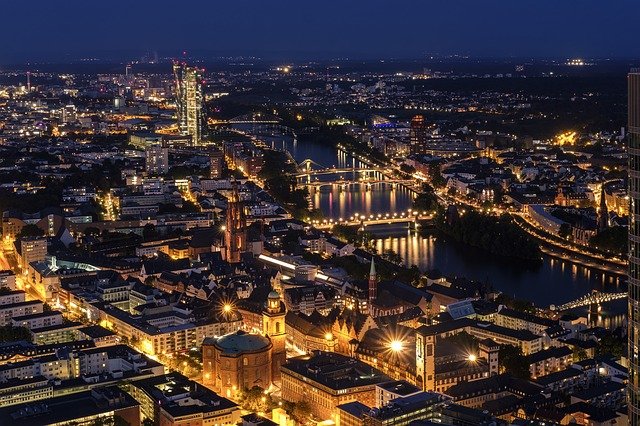 Futuristic skyscrapers and well-maintained traditional structures inhabited mostly by energetic bankers is how you can define Frankfurt. The fifth-largest city in Germany is famous for its 300 and more banks, making it the European Union and Deutschland’s financial capital. The business atmosphere of the city does not exempt itself from becoming a visitor’s paradise as well. The city takes pride in its unusually shaped buildings, churches, and museums.

Frankfurt’s origin is much like hearing a tale of how a hill near the Maine River became the city’s reformist metropolitan area. The city was given a name when Emperor Charlemagne designated it as a spiritual center way back in 794 AD. Its commercial status appeared during the opening of Frankfurt trade fairs, especially during book merchants’ cooperation in 1478. Many merchants’ success paved the way for high-end customers to buy services and goods, making Frankfurt the trade capital of Europe. It was in 2000 that the city became the home of the European Central Bank.

Frankfurt is a central travel hub of Germany and Europe, so the chances are you will pass through here, especially if you have a rail pass. Frankfurt Airport is Germany’s biggest airport and is a primary gateway to Europe. If you are traveling by train, Frankfurt’s massive Hauptbahnhof will have you connected to destinations across Germany and Western Europe.

Top Places to Visit in Frankfurt:

Established in 1815, this world-renowned art gallery has an excellent collection of European art from masters including Renoir, Rembrandt, Dürer, Rubens, Cézanne, and Picasso dating from the Ancient-Middle Ages to present. More modern works by artists, including Gerhard Richter and Francis Bacon are showcased in a concealed extension lit by round skylights. Admission prices can change according to temporary exhibits. Queues can be long, so save time by booking tickets online before visiting Stadel.

Frankfurt’s horizon wouldn’t be the same without the gigantic Main Tower, one of the most distinctive and tallest high-rises in town. A fabulous place to get a feel for ‘Mainhattan’ is 200m above road level, on the tower’s observation platform, reached by a fast lift in a mere under a minute.

Frankfurt’s red-sandstone cathedral is governed by a 95m-high Gothic tower, which can be scaled via 328 steps. Construction started in the 13th century; from 1356 to 1792, the Holy Roman Emperors were chosen (and, after 1562, crowned and consecrated) in the Wahlkapelle at the edge of the right aisle (look for the ‘skull’ shrine). After an 1867 fire and after the bombings of 1944, the cathedral was restored, which left it a burnt-out shell.

The Römerberg is Frankfurt’s ancient central square. Ornately covered half-timbered buildings, rebuilt after World War II, give an idea of how gorgeous the city’s ancient core once was. In the square’s center is the Gerechtigkeitsbrunnen.

Places to shop in Frankfurt:

Frankfurt is an excellent place for shopping. It caters both to the local population and the tourists, so you can find anything from haute couture to insanely cheap. Most of the shopping opportunities can be explored in the center. The bulk of shops are open until 8 PM, though some of the larger city center shops may close at 10 PM.

Where to eat in Frankfurt?

There are, of course, eateries all over Frankfurt. One famous area for dining is locally known as the Fressgass (“munching alley”). The correct name of this place is Grosse Bockenheimer Strasse. As the name implies, the Fressgass features many restaurants, cafes, and food stores. It’s a famous area to dine after tiring shopping. Take the subway to station Alte Oper or Hauptwache. From late April to early June (exact dates vary each year), the Fressgass Food Fest takes place with cheap beer, food stands, and live music.