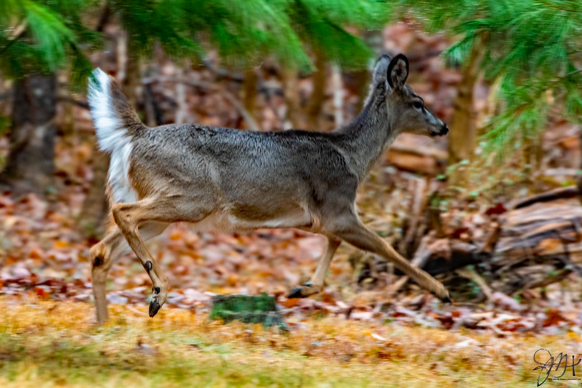 Do you get cold feet at the mere thought that your first hunting season is nigh? Fret not! Even the experts sometimes make these rookie deer hunting mistakes. We’ve listed the ones our editors would have liked to know when they were beginner hunters themselves. Had they known them when the time was right, they would have steered clear of lots of headaches and flops.

Don’t stay indoors when there’s a rainy or a windy day or a cold front is coming. Your chances of prime deer activity multiply exponentially as deer become more active when the weather gets colder.

Experienced hunters swear by bright, clear, cold days as the best time to hunt deer even outside prime hunting times. One reason for it would be that deer need more food when temperatures drop; so, they get out of their bed sites earlier. Another reason why deer move when temperatures plunge is that they need to be on constant move to stay warm.

But deer move during windy days too. A team of Alabama researchers found that 30 to 40 mph winds prompt deer to move as well. Windy days can be very productive because deer are more vulnerable: they are no longer able to hear predators’ moves in the woods, and that includes you.

During the rutting season, whitetails are far more likely to move in bad weather because they desperately need to breed, regardless of weather conditions.

Beginner deer hunters are taught that the best times to hunt deer are the early morning hours and the last few hours before dark. As a result, most hunters leave the stands for lunch or a nap before 10:00 a.m. However, you can harvest many deer between 10:00 a.m. and 13:00 p.m. when most hunters are out, especially if the weather is cold or windy. Just keep in mind that these deer will be hyper alert now because of all the early morning activity.

Little to No Personal Scent Control

When hunting deer, personal scent can blow your cover away. A deer’s sense of smell can be up to 1,000 times finer than that of a human. That’s because they are prey animals and need to detect their predators before it is too late. Fortunately, there are three surefire ways to control personal scent in order not to scare deer off: playing the wind, using odor concealers, and cleanliness.

Always make sure that you stay downwind from the deer. Also, before leaving base, use a scent-free soap when showering to remove as much of your body odor as you can. Your hunting garments should be washed with a scent-free detergent too and packed in a zip lock bag until you put them on at the hunting site. Some hunters add leaf litter from the hunting area to the bag to further conceal any trace of personal scent on their hunting suit.

If you are using commercial odor eliminators, use them with your hunting clothes on and BEFORE you climb into the tree stand. Insist on your hair and headwear and be aware that no product can get you completely scent-free.

Falling into a Pattern

Whitetails are smart animals. They can learn their predators’ patterns just like you can learn theirs. Most of them will leave an area if they notice that there’s a predator preying on their sisters every day there. That’s why you need to be less predictable and change your location, hunting methods, and tactics more frequently.

But don’t leave a location too soon. Give a tree stand location at least three days before moving to another area. But also try not to overhunt a tree stand, which is another mistake many beginner and intermediate deer hunters make. If you’re moving too fast you won’t get any chance of seeing any deer. If you’re moving too slow, you’ll fall into a pattern and the deer will learn your ways and avoid you. Only experience will tell you when’s the right time to move.

If you feel that the aim is slightly off and you might not get a clean shot, don’t take the shot. Just don’t! The chances are that your gut feeling is right and if you’re not listening to it, you may badly injure an animal and condemn it to a slow and agonizing death. Poor shot placement is a recurring issue with new bowhunters and poorly trained bowhunters alike.

To avoid this common mistake, arm yourself with patience and carefully keep an eye on the game’s body angle. Only shoot when you’re absolutely sure that you’ll get an ethical kill. If you’re not sure, admit that you might need a bit of more training and come back when you feel ready.

And don’t beat yourself up over your momentary lack of preparedness. Even some of the most proficient deer hunters fail to practice with their gear year round. But the difference between men and boys is men’s courage and humility to admit that they’re not ready and to not take that shot.

What’s more, authority resources for deer hunters, both new and advanced, such as wildernesstoday.com offer a treasure trove of deer hunting tips by hunters for hunters that can get you in the right state of mind when eyeing an ethical kill.

These are several of the most common rookie deer hunting mistakes we could think of off the top of our heads. Some of them are no-brainers like the scent control fails while others require an experienced hunter to point them out, such as the falling-into-a-pattern issue. Our list is not exhaustive and if you believe there’s a mistake beginner hunters should be aware of but didn’t make it on our list, share your insights with us in the comments below.

Disclaimer: The article is a press release from a third-party client. NYK Daily does not support poaching or violence against animals of any species.