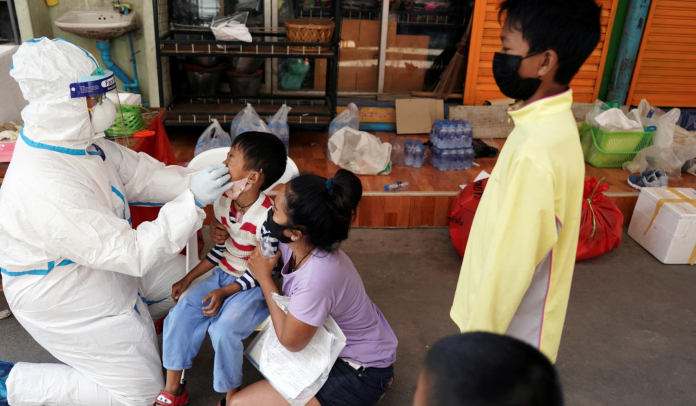 Thailand’s prime minister called for calm on Monday and said there were no immediate plans for a wider lockdown after 382 new coronavirus infections were confirmed, the majority linked to the country’s worst outbreak yet.

Of the new cases, 360 were migrant workers connected to a seafood centre outbreak in Samut Sakhon, a province near the capital Bangkok, where a lockdown has been imposed and thousands of tests were being conducted to contain and track the spread.

Prime Minister Prayuth Chan-ocha said the government would monitor the situation for a week before taking further action.

“Don’t panic just yet. We strongly hope everything will calm down in seven days,” he told reporters.

“I don’t want to go as far as a lockdown like other countries. This spread is traceable.”

Infections linked to the seafood centre rose to 821, most of those asymptomatic. Up to 40,000 people will be tested in and around Samut Sakhon, health officials have said.

Thailand had previously kept the epidemic in check, with just about 4,300 confirmed cases and 60 deaths until this weekend, among the world’s lowest numbers, due largely to its so far strict entry and quarantine requirements.

The majority of new cases were migrant workers from neighbouring Myanmar, a major source of labour for Thailand’s seafood sector. Myanmar has seen its cases surge to over 116,000 in recent months.

“It’s possible that Myanmar workers were brought in during the epidemic, leading to the outbreak in the Myanmar community in Samut Sakhon,” Wichan Pawan, an official at the Disease Control Department, told a briefing.

The main Thai stock index fell as much as 3.7% on Monday while the baht dropped as much as 0.9% in morning trade.

Fourteen other cases were reported on Monday, all but one in Bangkok or surrounding provinces, while eight cases were imported.

Health Minister Anutin Charnvirakul said a field hospital would be set up to test and treat migrant workers.