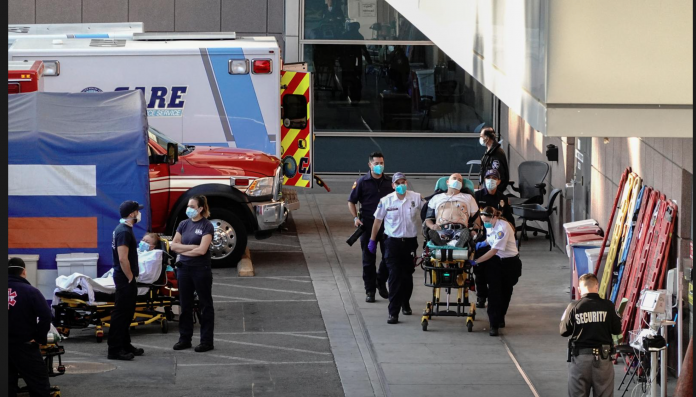 The United States topped 19 million COVID cases on Monday as hospital intensive care units were full to overflowing across much of California, a major U.S. virus hot spot, portending an extension of strict stay-at-home orders imposed this month.

Newsom said a formal decision on continuing the stay-at-home orders, among the most stringent in the United States, would be announced on Tuesday, based on trends projected by health authorities for the coming weeks.

He said greater diligence was needed in avoiding crowds and unnecessary travel in order to curb a raging pandemic that threatens to overwhelm healthcare systems before COVID vaccines can be made widely available to the public this coming spring.

“This is an anxious period,” Newsom told reporters in an online briefing.

Since U.S. regulatory approval was granted to two vaccines earlier this month, some 300,000 doses have been administered in California, the most populous U.S. state with 40 million residents, according to Newsom. Most of those injections have gone to front-line medical professionals.

Nationwide, well over 2 million people have received the first of the prescribed two-dose vaccine regimen, the U.S. Centers for Disease Control and Prevention reported.

Among them were residents and staff of a nursing home that made headlines as ground zero of the nation’s earliest major COVID-19 outbreak – the Life Care Center in Kirkland, Washington, outside Seattle.

Injections were given to nearly all of the facility’s 69 patients and most of its employees on Monday, 10 months after the first of 32 coronavirus-related deaths among residents was made public in late February, Life Care officials said.

“This is a great way to end the year,” the facility’s executive director, Ellie Schutt, said in a statement.

Nursing homes and other long-term care facilities around the country were among the hardest hit by the highly contagious respiratory virus early in the pandemic, reflecting the decision to make them a high-priority in the vaccine rollout.

More recently, an ominous surge of cases has strained hospitals to the breaking point in California and elsewhere, a consequence of increased holiday-season travel and socializing by Americans disregarding public health warnings.

The situation has grown particularly dire in Los Angeles and neighboring counties – home to about half the state’s population – and in the farming communities of the San Joaquin Valley to the north. Hospitals in both regions have struggled with an alarming influx of COVID patients that has left ICUs with little or no additional bed space.

The San Francisco Bay area and greater Sacramento are also under stay-at-home orders, with ICU capacities hovering just under 10% and 17%, respectively. They come up for possible renewal of COVID restrictions early next month.

For now most California residents are required to remain at home and avoid travel, except as necessary for permitted activities such as grocery shopping, medical appointments, dog walks and individual outdoor exercise.

The orders also place restrictions on a host of commercial activities, with restaurants limited to takeout and pickup service only and bars closed altogether.

Daily COVID-19 hospitalizations and ICU admissions have begun to plateau over the past two weeks statewide in a sign that more Californians are abiding by social-distancing and mask-wearing mandates, Newsom said. However, the numbers have continued to rise sharply in Los Angeles County and the neighboring counties of San Bernardino and Riverside, he said.

California has lost 3,238 lives to COVID during the past 14 days, and averaged 230 deaths daily over the past week, pushing total coronavirus fatalities in the state above 24,000 to date.

The United States has recorded more than 19 million infections and 333,000 deaths since the pandemic began. Daily cases are running at more than 180,000 nationwide, with nearly 2,200 Americans dying every 24 hours during the past week.

Over 118,000 coronavirus patients were being treated in U.S. hospitals across the country as of Sunday night, according to a Reuters tally of state-by-state health data.