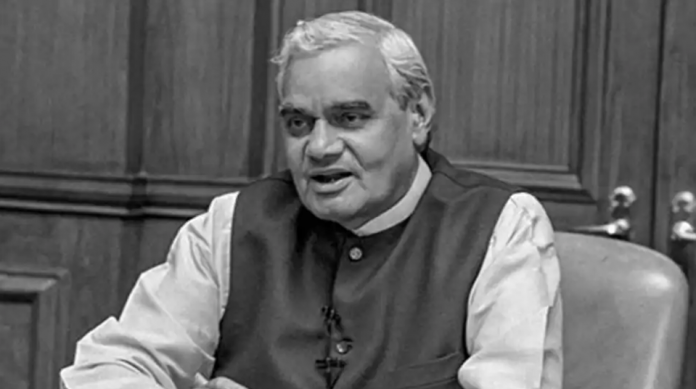 Earlier in the day, Modi paid respects to Vajpayee through a tweet, saying “with his visionary leadership, Atal Bihari Vajpayee ji took the country to unprecedented heights of development”.

Modi said the efforts of the BJP leader to build a strong and prosperous India will always be remembered.

To mark the birth anniversary of Bharat Ratna Atal Bihari Vajpayee, which is celebrated as the Good Governance Day on December 25, Prime Minister Modi paid floral tributes and also released the book published by the Lok Sabha Secretariat.

On this occasion, as per the past practice, a floral tribute was organised at Vajpayee’s portrait, which was unveiled on February 12 last year in the Central Hall of Parliament.

The book highlights the life and works of Vajpayee and contains notable speeches that were delivered by him in Parliament. It also contains some rare photographs from the BJP leader’s public life.

Vajpayee, elected 10 times to the Lok Sabha and twice to the Rajya Sabha, was a parliamentarian par excellence, who had the trust, affection and belief of the people in his leadership.

As a parliamentarian and particularly as Prime Minister, Vajpayee made innumerable important contributions that paved the way for a stronger economy through bold reforms and rapid development of infrastructure that gave India the Golden Quadrilateral, a mega project connecting the country through world-class express highways.

Vajpayee also distinguished himself as a fine statesman and a world leader.

As a parliamentarian, Vajpayee was awarded the Pt. Govind Ballabh Pant Award for Best Parliamentarian in 1994, which defines him as “a role model par excellence for all legislators.”

Born on December 25, 1924, in Madhya Pradesh’s Gwalior, Vajpayee took his last breath during treatment at the All India Institute of Medical Sciences (AIIMS) here on August 16, 2018.

Senior party leaders and officials were present on the occasion.

The state of Vajpayee was installed at the Lok Bhawan by Yogi Adityanath last year and Prime Minister Narendra Modi had unveiled it.

Tributes were also paid to the former prime minister at the BJP state headquarters.

Atal Bihari Vajpayee, represented Lucknow in the Lok Sabha for five consecutive terms from 1991 to 2009. He had a close association with the city and had many friends in the state capital.